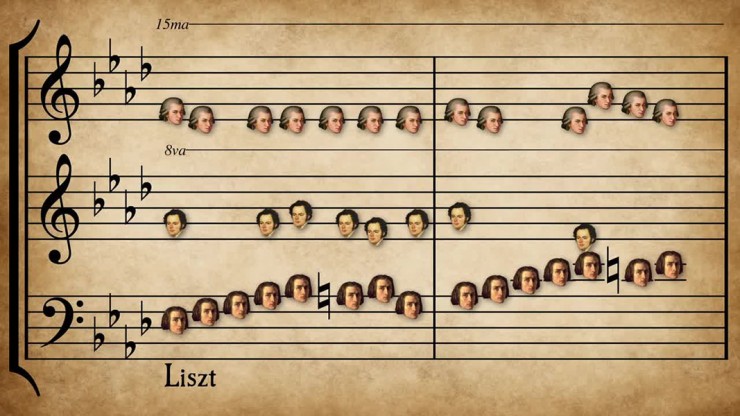 Every little while, something interesting appears on the Internet that captures our imagination. Each time, from the deepest recesses of Planet Earth emerges a creative genius who grabs hold of famous musical compositions from days past and gives them a new twist. While the compositions largely remain intact, these artists are able to infuse them with varied accompaniments such as computer-generated graphics and hand-drawn pictures. The end-results are captivating visuals that perfectly compliment the original compositions and have viewers glued to their seats.

London-based Sinfini Music skillfully rendered Bach’s famous The Well-Tempered Clavier into a visually-entertaining animation based in a virtual world that redefined the way we look at music. Italian musician and artist Alice Ninni converted Lacrime di Giulietta by composer Matteo Negrin into a beautiful, four-minute clip that also contained a social message. These stunning, modern renditions did not fail to impress piano music lovers. If anything, they even managed to attract new converts who are drawn into the world of piano and music.

This time, a Japan-based American, Grant Woolard, put together extracts of 57 famous compositions from 33 great composers into a continuous piece, complete with an accompanying video, to rave reviews.

It was not his first attempt in producing such mash-ups, having previously produced similar compositions with things as disparate as Beatles songs, television commercial jingles and even national anthems of European and Asian countries.

In his latest venture, Grant worked with famous pieces from composers like Beethoven, Tchaikovsky, Mozart, Chopin, Vivaldi and Pachelbel. The final product is a mind-blowing six-minute video, known simply as Classical Music Mashup. When played, viewers see notes, denoted by portraits of the associated composers, manifesting themselves on music scores at the exact times when the audio notes appear.

What is more interesting, however, is the clever integration of the 57 distinct compositions, listed below. With a keen eye for musical details and a talent for blending seemingly separate pieces, this talented artist has produced a video clip of the famous works, all seamlessly merged into one single, flowing piece.

This visual treat is all the more impressive when one learns that it was produced by a one-man team. Grant works alone and was solely responsible for the choreography, filming and editing involved in this latest mash-up video. For someone who confessed that he improved his piano skills vastly through self-recording after he stopped taking formal lessons, this was a great accomplishment, especially when it garnered 450,000 views on YouTube in the first three days.

Music lovers certainly have much to look forward to, in this era of technological innovations and the convergence of audio and visual. Most importantly, creative talent is in abundance amongst us. It may lie dormant most of the time but when it does emerge, it does magical wonders and helps bring classical music to yet another level of enjoyment.

I went whale-watching, and I was really looking forward to that, but when you see it on TV and you see other programs do it, you're seeing close-ups of these massive creatures, and the music that's added gives you a certain feeling. But in reality, you're stuck on a boat that's bobbing up and down, you feel sick, the whale isn't there on demand.