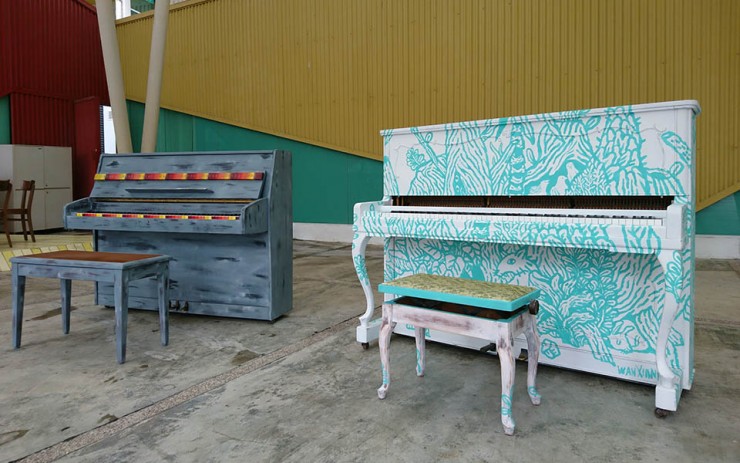 Following the two successful seasons of Play It Forward, Singapore in September to November, 2015, as well as March to May, 2016, the third season is here. The brainchild of three NUS Piano Ensemble members Jean Hair, Billy Soh and Lee Yan Chang, Play It Forward, Singapore is a community initiative that sees refurbished pianos placed in public places for the public’s enjoyment. It aims to give the public access to pianos, while also bringing people together by turning urban spaces into hubs for interaction. In view of this, the programme is supported by the Urban Redevelopment Authority’s Our Favourite Place programme.

Since the start of this programme, members of the public have benefitted, with many talented people who would not otherwise have had a chance to play on the piano realising their dreams of finally playing their heartfelt tunes. Voluntary welfare organisations also get to benefit from this programme, as some of the pianos are donated to them after the end of the programme.

Three pianos from Season 2 take pride of place in their permanent public homes. Two pianos, kindly donated by the Lim Siblings and decorated by Chu Hwai and Jia Ming, now sit permanently at the URA Centre’s entrance park for all to enjoy 24 hours a day, seven days a week.

A weekly community programme, Pianovers Meetup, has been taking place at this Maxwell Road premises every Sunday evening. This dedicated event has seen piano lovers (Pianovers) come together to know one another and bond over music.

A third piano, christined “Melissa”, can be found in the National University of Singapore UTown’s Stephen Riady Centre. It is also available to the public to play round the clock.

Play It Forward, Season 3, kicked off in conjunction with the final weekend of Singapore Night Festival 2016 on 27 August 2016. Held at the Singapore Art Museum, the launch saw two pianos, “Uncover” and “Oasis” unveiled, having arrived at Sam At 8Q, just in time for the event.

“Uncover” was donated by Jasper Chim and decorated by Abigael Tay, the Founder and Creative Director of interior design consultancy Obllique. Obllique has made a name for itself, specialising in the design of F&B and exhibition interior spaces.

“Oasis” was decorated by artist and illustrator Wan Xiang Lee. Wan Xiang utilises drawing as a tool for discovering the abstract dimensions of life and sees herself using it to understand the body and how they relate to other entities, as well as the inner states of our beings. Inspiration for her drawings can come from things as varied as comics, plants, animals and even photographs taken by herself.

The two pianos will be available for the public to play until 15 September 2016, after which they will make a one-day appearance at Keong Siak Road for PARK(ing) Day Singapore. Thereafter, they will be destined for their voluntary beneficiaries.

With such abundant creativity and overflowing passion making their presence felt in the arts scene, there is no doubt that Play It Forward, Singapore Season 3 will be yet another successful event. Head down to the Singapore Art Musuem while the pianos are still there!

Music is the only thing I've ever known that doesn't have any rules at all.