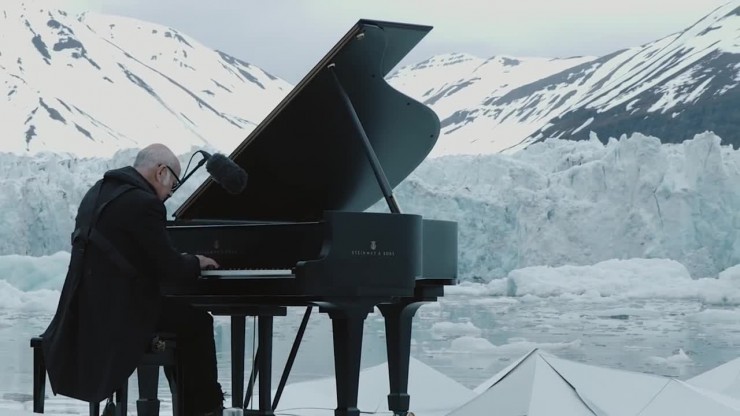 Seldom does a piano performance simultaneously take place in a stunningly beautiful outdoor location and take on a grim, urgent environmental message, however, this was precisely what happened in June 2016. Greenpeace, the environmental group, commissioned a special video that carried its message of environmental protection. Probably the most unusual piano performance ever filmed anywhere on Earth, this short performance featured well-known Italian composer and pianist Ludovico Einaudi playing a self-written piece in the frozen Arctic.

In the video, Einaudi was seen sitting by a Steinway grand piano on a floating platform before towering glaciers and playing to the natural sounds of the eeriely peaceful environment. Einaudis website called the world’s first piano performance on the Arctic waters “the most northerly grand piano performance ever held”.

The unusual piece’s release was timed to coincide with the OSPAR Commission meeting that was held in Tenerife, Spain. OSPAR Commission is an organisation represented by 15 countries in northern Europe and the European Union and charged with formulating policies to protect the sea bounded by these nations. The landmark meeting was to have been an important event that would discuss the management of thie marine environment, including the Arctic Ocean, the least-protected sea in the world.

Home to not just magnificent glaciers but also important wildlife, the Arctic environment regulates global weather. Apart from years of global greenhouse warming that have seen Arctic glaciers melting, the region has suffered damage with petroleum production that has continuously threatened to pollute its pristine waters. Greenpeace Spain, the activist group that has campaigned for environmental protection, spearheaded this unusual campaign by getting Ludovico Einaudi to travel with it to the northern reaches of Europe to bring out its message.

Greenpeace’s ship, Arctic Sunrise, carrying the Steinway grand piano that originated in Germany, along with Greenpeace campaigners, set sail from the Netherlands and called at Svalbard, the offshore territory of Norway. Einaudi joined the crew at Longyearbyen, the capital of Svalbard. Donning a black lifevest that matched his outfit and perched on the custom-made floating platform, Einaudi played his sombre piece, “Elegy For The Arctic”, before the majestic Warlenbergbreen glacier.

Aptly enough, as soon as the performance was about to start, a chunk of ice collapsed, causing a deafening roar and eliciting a gasp from the renowed player. Then, halfway through the playing, another chunk in another section of the glacier broke off and fell into the sea, this time in full view of the camera filming from behind Einaudi.

Einaudi must have been both in awe of his surroundings and yet felt deep emotions about his important mission, as he could be seen admiring the landscape, before frowning his brows as he started his performance. As Einaudi remarked after the performance, "Being here has been a great experience. I could see the purity and fragility of this area with my own eyes and interpret a song I wrote to be played upon the best stage in the world. It is important that we understand the importance of the Arctic, stop the process of destruction and protect it."

Einaudi’s performance in the frigid waters far beyond the Arctic Circle may have been a logistical feat, but more importantly, it carried an environmental message that echoed the sentiments of eight million people around the world. Music has a way of not only transcending national and cultural boundaries but also conveying important messages to mankind.

I listened, motionless and still; And, as I mounted up the hill, The music in my heart I bore, Long after it was heard no more.