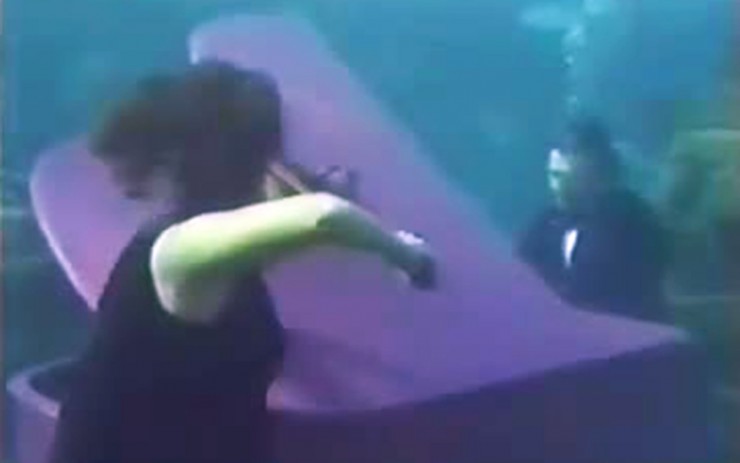 For centuries, man has been challenging physical boundaries and experimenting with supernatural feats. While some were initially dreams that were later fulfilled, like how the Wright Brothers pioneered the era of aviation with their gliders that enabled people to fly like birds, others were destined to be just experiments. Governed by the laws of physics and the constraints of human ability, these dreams were never fulfilled. Nevertheless, the people who tried to make them work are worthy of praise and should be lauded for their efforts.

One such dream is that of playing the piano underwater. Indeed, videos have emerged of musicians doing exactly that. The above video purports to show Andre Kempen, a South African pianist, and a group of musicians playing music underwater. The video starts with the scene of three men and a lady in formal suits making their way out into the open sea at sunrise. As waves roll around them and a passing boat paddles away from them, they remain undeterred, walking further and further away from shore, until they are consumed by the waves.

Once underwater, they quickly find their positions in which to perform, just like an emsemble would on stage. The lead musician, Andre Kempen, swims his way into the seat before a grand piano, while the three accompanying violinists stand around him. The music soon starts, with Kempen hitting the ivory keys and the violinists playing along, all breathing air bubbles as they serenade underwater. The beautifully-created video, like any other professionally-filmed piece, does not just show the musicians, but is interlaced with scenes of beautiful marine life. From multi-coloured fish gliding serenely from side to side and turtles paddles gracefully around the screen, this is nature at its best.

From one’s science classes in school and probably one’s own life experiences, one would probably have known that water is a poor conductor of sound. Sound gets distorted in a medium like water and unlike whales and dolphins that can communicate underwater, humans and their music do not take well to underwater sound transmission. In addition, the human respiratory system is not designed to breathe underwater, leading to the invention of underwater gear for divers. These facts, along with the cutting of scenes between music-playing and marine life happening around the emsemble, hint at a sleek advertisement-grade video created in a post-production studio, with soundtrack added at the later stage.

A comment posted in the comment section by a fellow Internet user seems to support this point. The user suggested that the underwater scene was filmed at Durban Aquarium as part of a government-led initiative to produce a tourist video to promote Mtunzini, a small coastal town along South Africa’s eastern coastline. Mtuzini is well-known as a scuba diving destination and the creativity associated with Kempen’s underwater performance fits nicely into the narrative.

Despite the beyond-belief nature of this video, credit must certainly go to the creative agency that produced this wonderfully-beautiful creation. Nature and music go hand-in-hand and when they are put together by the world’s most creative minds, something magical is produced. Thanks to this underwater piano video, the world now not only knows a little more about what South Africa has to offer but also has another precious piece of art added to its collection. Nature and music have a big role to play in promoting peace, friendship and relationships between countries!

Let's pretend my career in music is a bell. Whether you like my music or not is up to you. But you've got to admit I rang that bell pretty hard and pretty often.