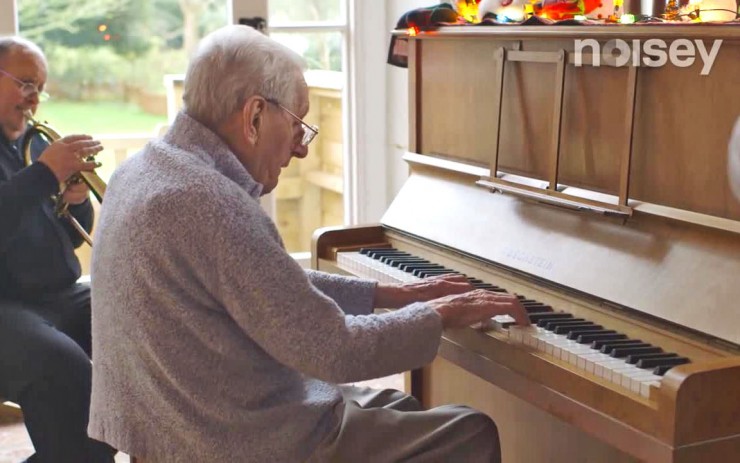 People have known that music has the innate ability to bring joy to people. Kids sing to their hearts’ content in school, and adults attend music concerts, all in the name of indulging in music and bringing enjoyment to their lives. However, music is more than that. From the United Kingdom comes a touching tale of how music has brought immense joy to a resident of a nursing home.

In December 2015, 93-year-old Edward Hardy, a resident of Mellifont Abbey care home in Wookey, Somerset was attached to a young caregiver known as Sam Kinsella. Suffering from severe dementia, Hardy had developed depression and proved difficult to care for. As he was unaware of his own actions, his actions like shouting and stamping his feet left the staff in the home perplexed, who did not know how to deal with him.

Things changed, however, when Kinsella talked to Hardy one day and the unlikely pair hit upon the topic of music. As the two men went on further, it became clear that the elderly man had been a talented musician during his younger days and wished to play again. It was then when Kinsella decided to contact Hardy’s nephew, who shipped a keyboard to the home.

What happened subsequently took everyone in the home by surprise. From an unruly man who was difficult to handle, Hardy transformed into one who was able to play a keyboard and keep himself occupied. Hardy’s passion for music had been reignited. It was obvious that even though Hardy was suffering from dementia, he nonetheless retained his ability to play music.

It turned out prior to moving to Mellifont Abbey, Hardy had been with a jazz band for many years. His music career, however, had come to a halt after he developed dementia and was moved here. Hardy’s young caregiver decided to place an advertisement on Gumtree, appealing for bandmates who would complement the pianist who wished to performed one last gig. While they received more than 80 offers from all corners of the UK, the most magical moment came when the original bandmates from Hardy’s jazz quartet appeared.

It was a truly magical reunion of the bandmates in the most unlikely of circumstances. The four men, comprising a saxophonist, a bassist and a drummer, got together and prepared for a “live” performance, right in the compound of Mellifont Abbey. On the performance day arrived, there was initial apprehension about how Hardy would perform in his first public performance of 35 years. All fears became unfounded, however, when the talented musician performed beautifully.

As described by his caregiver Kinsella, the look in his eyes when he was playing with his former jazz band was indescribable. They displayed intense, untold joy that could only have come from having refound one’s passion and jamming with one’s old friends.

This episode showed the power of music for people suffering from dementia. While music has been known to bring joy to people, it can certainly be said that music brings immense joy to people who are suffering from cognitive disorders. Music has its own curious way of finding its way into people’s hearts and bringing limitless enjoyment to them.

Everywhere in the world, music enhances a hall, with one exception: Carnegie Hall enhances the music.