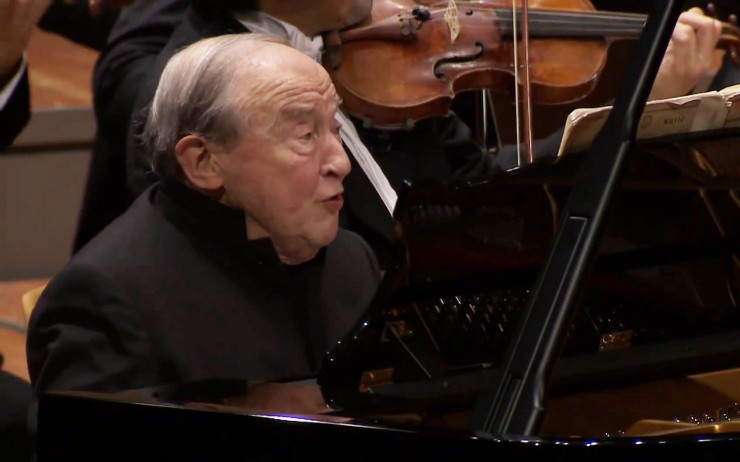 In December 2014, a stocky old man gave a piano concert in Germany. This musical event saw 90-year old Menahem Pressler playing the piano, along with the Berlin Philharmornic Orchestra and with Sir Simon Rattle as the conductor. This New Year’s Eve concert was televised “live” around the world.

While televised concerts with world-renowned orchestras are commonplace, what was surprising was that the performer was no young performer. At the ripe old age of 90, most people would have happily retired and enjoying their favourite pasttimes at home. Indeed, having gone through a fulfilling life, one would be content to take a step back and enjoy their time with their families. Others who still wish to contribute their expertise would gladly join companies as their advisors or consultants.

Pressler, however, would have none of these. Having been acquainted with the piano at a young age, the instrument was an intimate part of Pressler. So passionate was he about playing the piano that he relished the opportunity to perform with one of the world’s leading orchestras. His

Pressler, an Israeli-American pianist, was born in Germany in 1923. While his relatives lost their lives in Nazi Germany’s concentration camps, Pressler and his immediate family managed to flee the country. In 1946, Pressler won first prize at the Debussy International Piano Competition, a well-known event that was held in San Francisco. Thus began the launch of the young pianist’s impressive career. Nine years later, he taught the piano at Indiana University’s Jacobs School of Music. 1955 was also the year when Pressler co-founded the Beaux Arts Trio, a music trio with performers playing the piano, violin and cello. While the violinists and cellists came and went, Pressler was the original pianist throughout the 53-year old existance of the group, which finally disbanded in 2008.

When most would have thought that Pressler, then 85, having parted ways with the band members, would take a back seat in life, he surprised all. Not only did Pressler continue to pursue his interest in music, he even showed that age was no barrier in public performances.

In 2010, he played at the Rheingau Musik Festival. Then, in early 2014, he was presented with an opportunity to appear on stage again. This time, he performed Mozart’s Piano Concerto No. 17 with the Berlin Philharmonic Orchestra. The performance was conducted by Semyon Bychkov. Later that year, Pressler performed yet again with the world-renowed orchestra at the televised New Year’s Eve concert.

Pressler’s rise in the world of piano performance over the years, culminating in his solo performance at 90, was both impressive and unprecendented. Pressler put his thoughts this way, “The fact that I am now once again having a solo career at my age is a miracle. The piano saved my spirit and gave my life a purpose. I've had a hunger for music making all my life, and that hunger hasn't abated."

Clearly, Menahem Pressler’s passion in piano is second to none. He pursued his passion when he was a young man, resulting in his lifelong career in music. More than half a decade later, the desire is still burning strongly in Pressler’s heart.

The flame that is naturally clear always gives the most light and heat. If I could blend my talent for poetry and music into one, the light would burn still clearer, and I might go far.