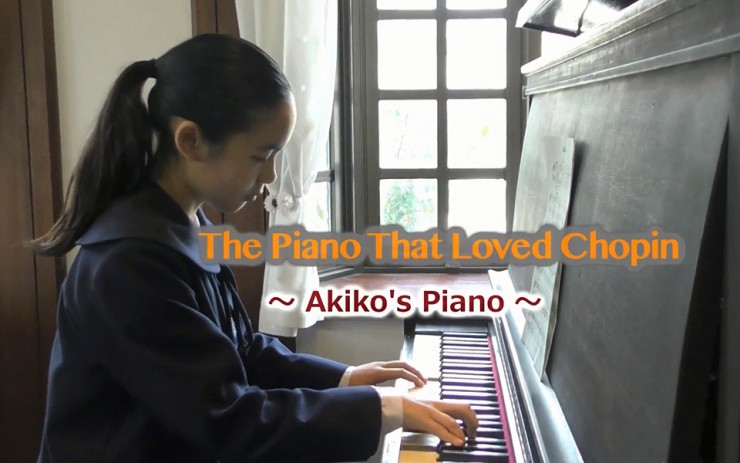 Strange are the workings of fate. On 5 August 2017, a famous American pianist, Peter Serkin, played Brahms D minor Concerto with Hiroshima Symphony Orchestra. It was during this time that Serkin encountered a bombed piano, an American Baldwin upright piano made sometime in 1920. This piano’s history is as special as its presence.

Known to the world all over as Akiko’s piano, the piano belonged to a girl called Akiko Kawamoto.

Akiko was born in 1926 in Los Angeles. When she turned six years old, her family decided to settle down in Hiroshima, her mother’s hometown. It is said that Akiko’s family brought the Baldwin piano with them from America. The piano was one constant companion for the little Akiko as she grew up in Hiroshima.

The diaries she used to maintain has several entries where the piano is mentioned time and again. One entry reads “On Mondays, Wednesdays and Fridays, I’ll learn to play the piano”. Another one reads “Starting today, I’ll have piano lessons everyday”.

In recent years, when Martha Argerich, a world-renowned pianist visited Hiroshima, she played Chopin on Akiko’s piano. She later said, “I think the piano loves to play Chopin, strangely enough. Maybe the piano has the memory of this.”

Akiko indeed loved to play Chopin on the American Baldwin upright piano. Life was good. She used to learn to play the piano, attend school and play on her piano.

However, life was to change drastically both for Akiko and her piano, with the horrendous atomic bombing of Hiroshima. On 6 August 1945, Akiko was working as a mobilised student when her city was devastated by atomic bombs dropped from American warplanes. The poor girl’s body was covered in burns and despite the great physical pain she was in, she swam across the river to reach her home. Akiko was just 19 years old when she died the following day.

Akiko’s piano had to also bear the brunt of the atomic bombing of Hiroshima. The piano was badly damaged because of the bomb’s destructive heat and blast. Glass shreds can be seen still embedded in the woodwork of the piano. However, unlike Akiko, the piano was to survive the ordeal miraculously.

Many people came together to restore Akiko’s piano, including Ms. Tomie Futakuchi, who lived in Akiko’s neighborhood. A piano technician, Hiroshi Sakaibara, was entrusted with the Herculean task of repairing Akiko’s piano. Bit by bit, Akiko’s piano was fine-tuned and restored.

Mrs. Kimiko Yamamoto, sister-in-law of Akiko, wrote a letter to Rei Yamamoto, her granddaughter. In it, she said that the atomic bomb was the result of an evil action by human beings in a war. In her words, “We can prevent a war.” She furthers wrote that she would like the younger generation, who are the future of Japan, “to have a clear understanding of the threat of nuclear weapons and the stupidity of using them, and to think carefully about this and to act on it”.

Akiko’s piano is a testimony to what was an infinitely hurting time in the history of mankind. But like a phoenix that rises from the ashes, Akiko’s piano was restored and has now become a symbol of hope for the future. It is when peace prevails that one can freely play the piano and Akiko’s piano teaches all of us that we should never take our freedom for granted.

The dance can reveal everything mysterious that is hidden in music, and it has the additional merit of being human and palpable. Dancing is poetry with arms and legs.