When A Chicken Plays The Piano Better Than You | ThePiano.SG
Skip to main content 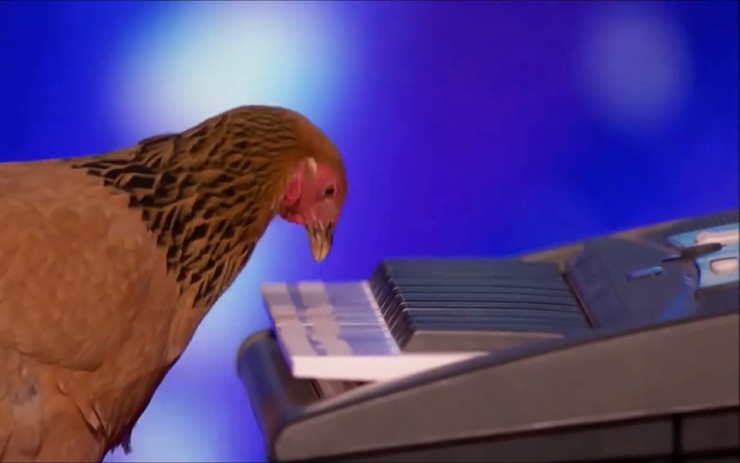 In what must have been one of the most memorable episodes of America’s Got Talent, Season 12, a chicken stole the limelight as it played on a keyboard to screaming audience.

In Episode 1, conducted before of a “live” audience in May 2017, contestants Seiree Arii and Shannon Myers appeared on the stage with a very unusual partner. The unexpected guest was a brown chicken, safely wrapped in a towel and tucked into Shannon’s chest. The duo claimed to an astonished panel of judges and an equally wide-eyed audience that their intelligent chicken, Jokgu, would play “America Is Beautiful” on a keyboard. America Is Beautiful is a melodic tribute to America's Purple Mountain Majesties, the Pikes Peak in Colorado.

When Jokgu was put before the miniature keyboard and music was played over the sound system, however, nothing happened. Not only did the chicken not hit the keys, it went about its “chicken business”, repeatedly turning around and pecking at its feathers. The judges looked helplessly at the strange performer on stage as its owners prodded it in a seemingly futile attempt to get it to start playing. The world seemed to crumble there and then.

Just as all hopes were almost lost, the chicken gained its composure and started pecking at the keys! Slowly but surely, the fowl hit the ivories, note by note, along with the background music. It kept at it, turning its head left and right and not missing a key, until the song was over.

The audience was wowed and of course, the judges were, too! All four of them, Howie Mandel, Mel B, Heidi Klum, and Simon Cowell, voted "Yes" and sent Jokgu to the Judge Cuts. In the next qualifying round, Jokgu was joined by a partner chicken, Aichan. This time, The Chicken Duo refused to play the pianos and were sent packing.

Truth be told, Jokgu did not exactly “play” the keyboard like human pianists do. It followed a red light appearing next to each key. Still, it was an impressive performance, certainly entertaining enough to be featured on America’s Got Talent!

Now that a chicken has learnt how to play the keyboard before me, there’s no more procrastination! I need to start learning! By the way, did the chicken play with the left hen or the right hen? Oh, did I tell you I was having KFC while watching this episode of America’s Got Talent?

Many people die with their music still in them. Why is this so? Too often it is because they are always getting ready to live. Before they know it, time runs out.