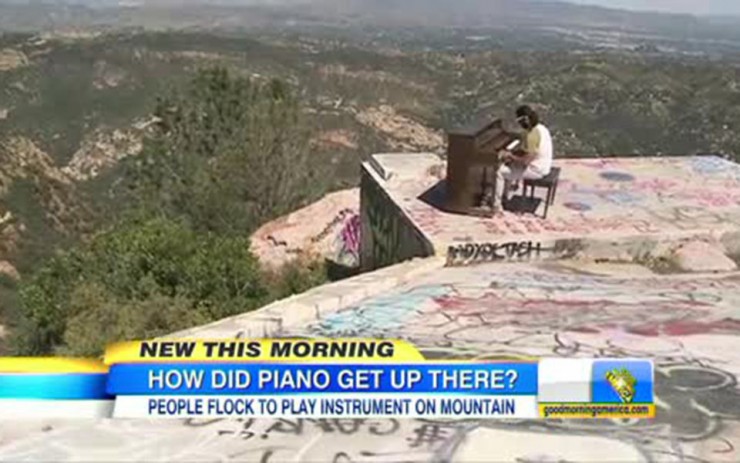 The world of music has certainly had its fair share of oddities. When workers at a piano tuning shop in Shropshire in the United Kingdom found a hoard of old coins in a piano that had been sent in for repairs, the world held its breath. Till today, although it is almost certain the hoard had been deliberately hidden in the instrument, a mystery remains as to who had placed it there.

As if the mysterious coins in the old piano were not enough to raise eyebrows, a piano had mysteriously appeared on top of a mountain in 2006.

Volunteers who had been on Ben Navis, the highest peak in the United Kingdom, found the abandoned piano while removing litter and stones near the peak. Located in Scotland, the 4,418-foot high mountain was a popular hiking venue. The group of 15 volunteers belonged to John Muir Trust, a conservation charity that happens to own part of the mountain. The group was certainly surprised to find the piano, located only 200m from the summit.

While the group had grown accustomed to seeing litter appear on Ben Navis, this was the first time they had encountered something so huge. To make things even more dramatic, the piano was found only 200m away from the summit. The volunteers had initially thought they had only found the piano casing, however, it soon dawned on them that they were looking at an almost complete piano, complete with a cast iron frame with strings. The missing keyboard, though, became a topic of speculation.

The mystery unraveled when a Scottish woodcutter, Kenny Campbell, contacted the press with his story. According to Campbell, from Bonar Bridge, Scotland, he had carted the piano onto Ben Navis in 1971 as part of a fund-raising event. The then-30-year-old Campbell had lugged the instrument mostly on his back. He probably did not expect a group to find the piano hidden under stones 35 years later.

Across the Atlantic Ocean, in Santa Monica, California, another piano had mysteriously appeared on a mountain. When hikers on a remote trekking route found the instrument, their pictures went viral on the Internet.

Soon, it was revealed that a group of young people had moved the piano onto the mountain for the filming of a music video by singer Rachel Wong. Following the shoot, the group realised they had no good way of bringing the piano down, hence the decision to leave it on the mountain. Their idea of contributing something interesting to the environment, however, fell on deaf ears. The local authorities considered this a littering offence and within days, the piano was brought down.

There have been other cases of pianos being found in the unlikeliest of places. Once, a baby grand was found lying on a sand bar in Miami Beach. In another occasion, a majestic grand piano was found under the Brooklyn Bridge in New York City. It was discovered later that the Miami Beach piano was the result of a prank from a 16-year old student, while the Brooklyn Beach instrument was mostly likely what had been left behind after a photo shoot.

While it certainly sounds strange to have a fully-functioning piano appear in the remote wilderness, it nevertheless will spur music lovers to reach out to them, play to their hearts’ contents and have home-made music videos taken of the magical moments. Apart from creating more hype among members of the public, the appearance of such pianos might just create more nature lovers who would stop at nothing to get their chance on a mountaintop piano!

Each year, every city in the world that can should have a multiday festival. More people meeting each other, digging new types of music, new foods, new ideas. You want to stop having so many wars? This could be a step in the right direction.