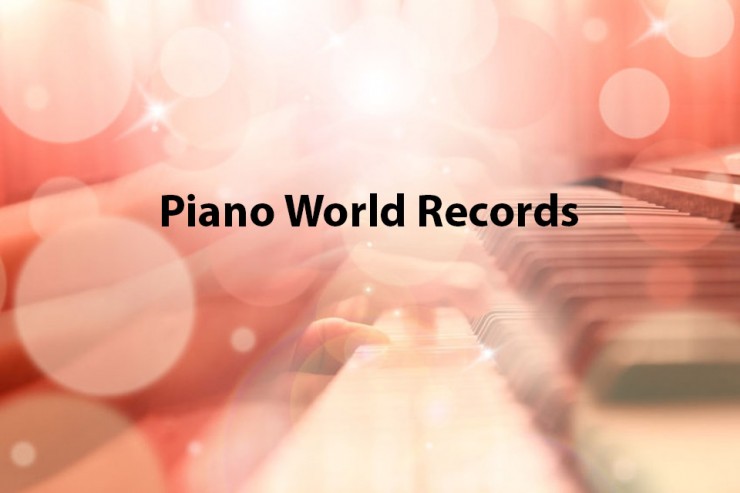 Playing the piano has always been seen from the typical educational, musical, and performing perspectives. Thus, it can be a refreshing surprise to view it from a new perspective: world records related to piano! Many pianists themselves might not be even aware of these achievements. Time to find out!

Most musicians to play the same piano simultaneously

Who:  Angela Montemurro, and her 17 students
Where: Italy, Bari
When: 20 October 2014
Source:   Guinness World Records

The most musicians to play the same piano simultaneously is 18, achieved by Angela Montemurro (Italy) and 17 of her students, who performed the piece Galop Marche composed by Albert Lavignac (France) in Bari, Italy, on 20 October 2014.

Most musicians to play the same piano (relay)

The most musicians to play the same piano was 103 in an event organized by Kuniko Teramura (Japan) and friends, at the Shiga University Auditorium, in Hikone, Shiga, Japan, on 22 April 2012. The participants played during 20 minutes Beethoven's 'Ode to joy'. Participants were rotating during the attempt so all could play.

Most piano key hits in one minute

The most piano key hits in one minute is 765 and was achieved by Bence Peter (Hungary) at Debrecen Ball of the City, Kolcsey Convention Center, Debrecen, Hungary on January 14, 2012. Peter's key of choice was C#.

The longest marathon playing piano lasted 103 hr 8 sec and was completed by Romuald Koperski (Poland) at Alfa Centrum, Gdansk, Poland from 27 - 31 January 2010. The attempt was timed by Tissot of Switzerland, and was officially started by Danuta Walesa, the Polish First Lady.

"Catcerto" is a four-minute piano concerto for chamber orchestra and cat composed by Mindaugas Piecaitis (Lithuania). The piece – in which the orchestra accompanies a video recording of a cat pawing at notes on a piano – was debuted at the Klaipeda Concert Hall in Klaipeda, Lithuania, on 5 June 2009, with Nora the cat at the piano. Composer/conductor Piečaitis notated Nora’s melody from a video recording he had seen on YouTube then composed the orchestral accompaniment to match. The piece requires the orchestra to play live alongside Nora’s projected video footage. Nora is a rescue cat from Cherry Hill, New Jersey, USA, and is named after the painter Leonora Carrington. She was given a new lease of life by piano teacher Betsy Alexander and artist Burnell Yow. In 2009, Nora was named Cat of the Year in the annual ASPCA Humane Awards.

The largest piano ensemble consisted of 555 participants led by conductor Lee Sun-Young at the '555 Fantastic Piano Festival' organised by Young Chang Co. Ltd (South Korea) at the Incheon Samsan World Gynasium, Incheon, South Korea on October 7 2007. The ensemble featured 348 upright pianos, 31 grand pianos and 176 synthesisers. The concert was held to celebrate the city of Incheon winning the right to host the 2014 Asian Games.

Longest career as a music teacher

The world record for the longest working career for a music teacher was set by Charles Wright (USA, b. 24 May 1912) who began teaching piano privately and professionally in 1931. He continued to do so for the next 76 years until he passed away on 19 July 2007, aged 95 years 56 days.

*Note: the world records shown in this article might not reflect the most recent.

We should consider every day lost on which we have not danced at least once.