The Piano Duel in the Legend of 1900 | ThePiano.SG
Skip to main content 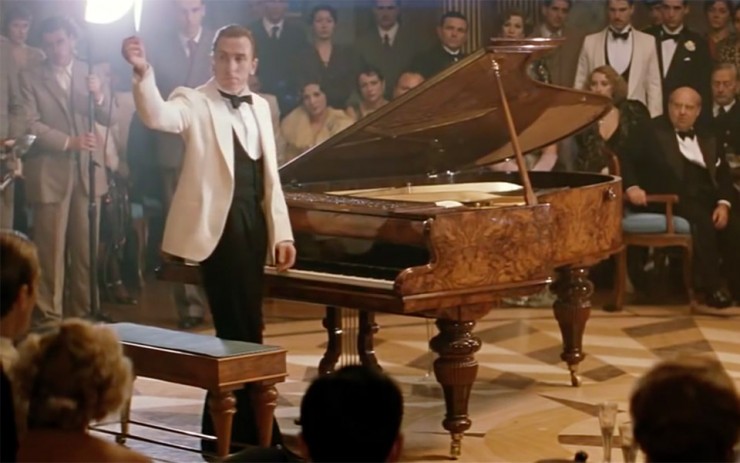 Many great movies about piano have been made, however, probably none endears itself to the viewer as much as The Legend Of 1900. Starring Tim Roth as the eccentric pianist 1900, this movie tells the tale of a talented pianist who was born on board the four-funneled passenger liner SS Virginian on New Year’s Day in 1900.

Adopted by a coal worker from the boiler room, he was named Danny Boodman T D Lemon 1900, after the coal worker’s own name, an advertisement found on the box the newborn was found in and the year. 1900 lived on the Victorian-era ship all his life, having spent his growing-up years seeing the world from the comfort of the oceans that carried the SS Virginian between its ports of call.

The young 1900 found an affinity with the grand piano that was installed in the hall. He was discovered one night playing alone, when the beautiful notes woke the passengers from the slumber and caused them to gravitate towards the music in their pyjamas. 1900 pursued his passion despite that fact that he was playing against the rules and he soon became an accomplished pianist.

1900’s adventures on the high seas saw him in many interesting episodes, including once when he played a piano gone wild as the ship rolled on the rough oceans during a thunderstorm and another when an enterprising music record producer came on board to do a recording of an original number, only to have the talented pianist run off with the record as he searched for a girl who inspired his music.

The movie came to a tearful ending when the ship had finally outlasted its usefulness and was sunk in the deep waters but had to carry 1900 down with it, owing to his fear of leaving his floating home and venturing into the unknown.

Perhaps one of the more memorable scenes was the piano duel between 1900 and the arrogant Jelly Roll Morton, who claimed to have invented jazz. Morton clambered onto the SS Virginian upon hearing about 1900’s piano-playing skills with a view to challenge him to a duel before a “live” audience.

Morton displayed his musical prowess when he exhibited his delicate and elegant playing with the help of a burning cigarette, which he placed on the edge of the piano. He managed to complete his first piece without shaking the ashes off the cigarette that, by the end of the piece, had burnt precariously close the piano.

Following two rounds in which 1900 failed to match the audience’s expectations, the first because he had elected to play the simple Silent Night and the second due to the fact that he had reproduced the tune that Morton had just played, 1900 finally excelled when he played an original composition by Ennio Morricone - Enduring Movement, much to the applause of all present. The highlight came when he played with such vigour that the steel strings within the piano turned so hot that he lit a cigarette with it. 1900’s employment of the cigarette was a direct response to Morton’s use of the same at the beginning of the duel. Morton left the hall defeated, knowing that he was no match for well-respected 1900.

Morton had underestimated his match when he daringly made the challenge to the talented 1900. The younger 1900 did not impress the crowd with his earlier response to Morton’s pieces and at one stage, even felt that Morton was indeed better than him – he actually cried upon hearing Morton’s The Crave, which Morton played with sleek moves. Despite the rivalry, 1900 displayed great sportmanship, remaining humble and honouring Morton piece with some improvements. He eventually got his act together and found his inspiration, thrashing a Morton who had gotten complacent and exasperated. This final move provided a redeeming factor for 1900, who returned to a hero’s welcome. The above observations is in line with a comment posted on the YouTube video.

Interestingly, years after The Legend of 1900 was released, a movie carrying a somewhat similar duel scene was released. Secret (不能说的秘密) was a Chinese-language movie that was made in Taiwan and starred Jay Chou (周杰伦). In the duel scene, Ye Xianglun, played by Jay Chou, was pitted against The Prince of Piano, played by Zhan Yuhao (詹宇豪). The protagonist was a humble young man who played the piano respectfully against his opponent. Piano lovers would have recognised Chopin’s Waltz (Op. 64 No. 2 in C# minor) and the “Black Key” Etude (Op. 10 No. 5). Given the similarity of the piano duels, it seems probable that Jay Chou, the Director and co-writer of the movie, might have gotten inspiration for this duel scene from The Legend of 1900.

You must play for the love of music. Perfect technique is not as important as making music from the heart.