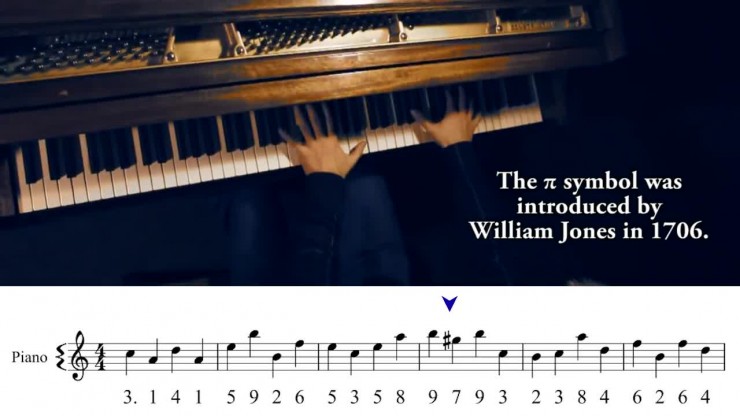 The world is full of mysteries. For many, π (Pi) is a mathematical symbol, a representation of the ratio of a circle’s circumference to its diameter. Over the last several hundred years, mathematicians and the general public have tried to deduce the true value of the number. Numerous approaches have been used and various approximations have been proposed. The reality that the decimal representation of π never ends and the fact that a pattern cannot be identified has made it so mystifying and mind-boggling for centuries.

The inexhaustible numbers have enthralled the minds of many great men and many endeavor made futile attempts to solve this puzzling mathematical puzzle. The importance of π in the human history was probably what helped shape ancient civilizations.

Music notes give life to melodies, which, in effect, can be interchangeable with numbers. As composers embark on their eternal quest for ingenious and original pieces, many are inspired by the use of mathematical constants as music pieces.

As one of the most perplexing mathematical constants, π caught the attention of Lars Erickson who composed the piece, Pi Symphony in the early 1990s. Customarily, playing a melody haphazardly would hardly be magnum opus. As random as the digits in π may seem, the melody that was composed out of it sounded as majestic as a symphony.

Lars was not the only composer fascinated by π. Jim Zamerski composed a melody of π using 226 digits utilising the 12 tones in music as a base. Though using the same numbers in π, the composition by Zamerski offers a lighter mood than Lars’ piece. The piece starts by bringing its audience into a melodramatic mood that swiftly transforms it to a tune that is somehow danceable, with a varying tempo throughout its entire duration.

Another notable piece composed by David Macdonald provides a diverse angle into the world of π. The π music, with the added harmonics played by the left hand, somehow conceals the randomness of π. The poignant piece seems to coerce its listeners to discover a faraway mythical spot in their minds.

There were, of course, many others who tried to replicate π into a tune. One of the more popular ones has to be Michael John Blake, who used a variety of musical instruments to play the π song.

His YouTube video, What Pi Sounds Like, was sued by Lars, who claimed the copyright to Blake’s idea of composing π into a music piece that sounded similar to his.

Judge Michael H. Simon heard the case in the U.S District Court, District of Oregon. In the end, the court ruled in favour of Blake, as copyright laws dictated that a copyright infringement occured only if a protected work was copied in its entirety by others. In Blake’s case, however, his piece was not analogous to Lars’. Furthermore, π itself was, in fact, non-copyrightable.

It is incredulous that music could actually give life to a factual concept like π. π is a perplexing formula and while it will continue to baffle more, those who might not have a second look at it will be spellbound by the music that is composed with it.

A composer is a guy who goes around forcing his will on unsuspecting air molecules, often with the assistance of unsuspecting musicians.