Blind Pianist Nobuyuki Tsujii Cries While Playing "Elegy For The Victims Of The Tsunami Of March 11, 2011 In Japan" | ThePiano.SG
Skip to main content 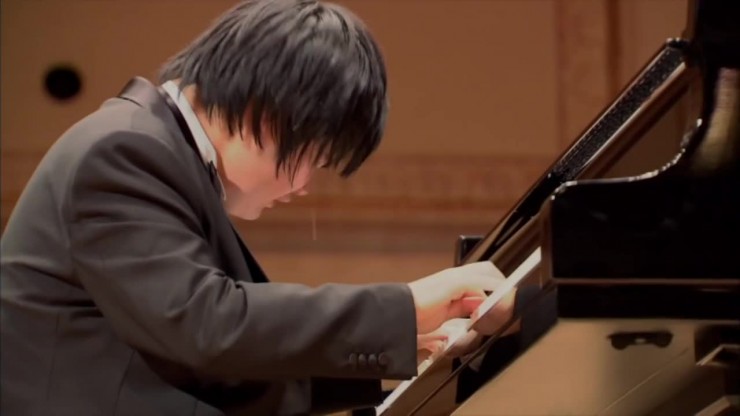 On 10 November 2011, a 23-year-old pianist appeared on the stage of the famous Carnegie Hall in midtown Manhattan, New York City. Over the course of four minutes, the smartly-dressed young man played an original composition with such emotions that tears flowed from his eyes. His exceptional performance had the usually-reserved Carnegie audience give him a standing ovation.

The 19th-century Carnegie Hall is a prestigious performance venue reserved for the best performers and Japanese pianist Nobuyuki Tsujii certainly lived up to expectations.

Nobuyuki was born blind but that did not stop him from learning to play the classical piano. Nobuyuki developed a passion for music at a very young age, having played Jingle Bells at two and performed with the Osaka Century Symphony when he was twelve. He went on to become the world’s first blind pianist to win the Van Cliburn International Piano Competition in 2009, in a tie with Zheng Haochen from China.

Because he is not able to see, he learns to play pieces through listening and memorisation. He is usually led to the piano by a guardian or the conductor and he feels the edges of the keyboard to obtain his orientation.

In the Carnegie Hall performance, Nobuyuki played “Elegy for the Victims of the Tsunami of March 11, 2011 in Japan”. This was a self-written piece dedicated to the people who had perished when the earthquake and tsunami struck Japan.

That fateful afternoon, a magnitude-9.0 undersea earthquake had occured 70km off the eastern coast of the country. The powerful shock waves had triggered a tsunami that had, in turn, devastated numerous cities, towns and villages on the eastern seaboard and killed more than 15,000 people.

Nobuyuki had composed his elegy in memory of the people who had lost their lives in what had become known as Japan’s largest and most difficult crisis. The young pianist’s masterful playing not only transmitted beautiful melodies to the audience present but also conveyed his deepest emotions associated with the substantial loss of lives.

While those seated in the front rows, as well as the video cameras trained on the stage, picked up the hot trails of tears that had streamed down and off the musical prodigy’s face, not just once but multiple times, it was beyond doubt that those who only had the opportunity to listen from afar would also have detected the feelings of sorrow in Nobuyuki’s music.

In essence, Nobuyuki played with not only his fingers but also, and more importantly, his heart. Through his emotional piece, Nobuyuki had certainly brought the Carnegie audience into the deepest recesses of his heart as they remembered the tsunami victims together.

By the end of the soulful performance, the audience had been so moved that it gave a standing ovation and a very thunderous applause.

The Carnegie Hall performance was not the only event in which Nobuyuki received such a warm reception. Two years after this event, Nobuyuki was invited to play at the BBC Proms 2013, held in Royal Albert Hall in London.

As he was led to the piano by conductor Juanjo Mena, the members of the BBC Philharmonic Orchestra, as well as the audience, gave him their standing ovation. Looking at the smiling faces of the orchestra members as he gently made his way to the front, one can certainly tell they relished having him in their midst.

Nobuyuki’s rendition of Franz Liszt’s La Campanella was nothing short of magical. As his smooth, fleeting touches of the keys manifested into the familiar sounds of the masterpiece, those present could not help but feel the player’s heart and soul etched into the music.

La Campanella is generally considered a difficult piece to master, even for a seasoned pianist, due to the need for the player to stretch his right hand over two whole octaves. However, as the BBC commentator put it, Nobuyuki did not find it difficult, because the piano “was just an extension of his body”.

When one does not rely on his sight but on his other senses to learn music, one almost certainly plays the resulting pieces with nothing less than his heart and feelings. This is something that young Nobuyuki Tsujii does extremely well.

The show business has all phases and grades of dignity, from the exhibition of a monkey to the exposition of that highest art in music or the drama which secures for the gifted artists a world-wide fame princes well might envy.