Behind the scenes of the project "Play Me, I'm Yours (Singapore)" - Tuning the 25 pianos | ThePiano.SG
Skip to main content 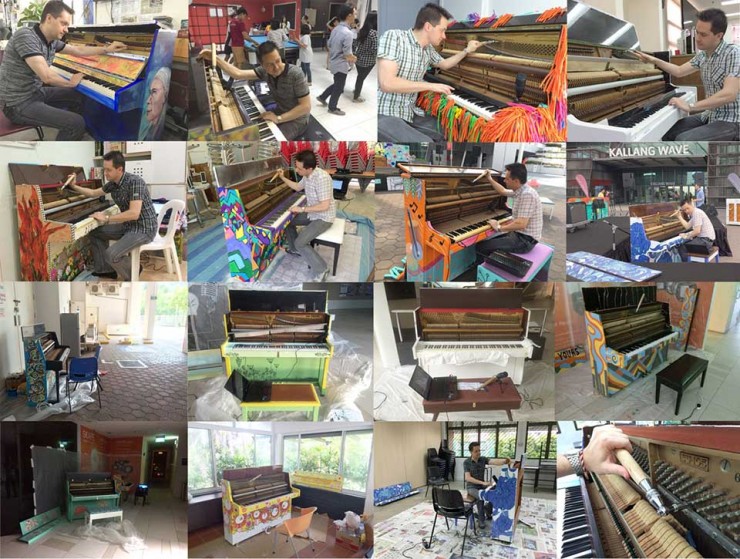 I’m Zhivko Girginov and I voluntarily tuned for free all the 25 pianos for the Singapore edition of the international music & arts community project “Play Me, I’m Yours”.

I managed to tune all the 25 pianos for 13 days, spending 3 hours for each piano with additional traveling time of 2 hours. Having no car myself, I had to use only public transport because cab fare would have cost around 30 times more than a standard bus or train fare in each direction. All the social welfare organisations that hosted the pianos for their decorations are spread islandwide and they are open only on weekdays from 9am to 6pm. Due to this, actually not more than 2 pianos could have been tuned daily.

Normally you won’t see a Caucasian guy with a bulky heavy bag in hand walking under the heat on the streets at Yishun, Punggol, Pasir Ris, Pasir Panjang or Choa Chu Kang. Those local residents there were staring at me with great interest and I was seeing their face expressions like: “What is this angmoh doing here meh?”

On a side note, I have been living in Singapore for 7 years now and I can tell you – the residents in each district in Singapore are very different! The way they behave, the way they speak, the way they look like. I’m always amazed on the wide spectrum of social diversity in such a tiny island. I find it truly fascinating!

However, one day bus 169 dropped me at a place to the north of Sembawang with absolutely no resident people around, which pretty much looked like I was somewhere in New Zealand, with streets names like: Wellington Road, Auckland Road, Fiji Road.

I had to tune a piano located in the women’s prison. The piano was placed outdoors under a shelter, with no aircon or fan around, so I was sweating profusely. I was told that just few weeks ago there were 2 fatalities from dengue mosquitos in that area, so I was supercharged with an additional motivation to finish the piano tuning in a faster way. 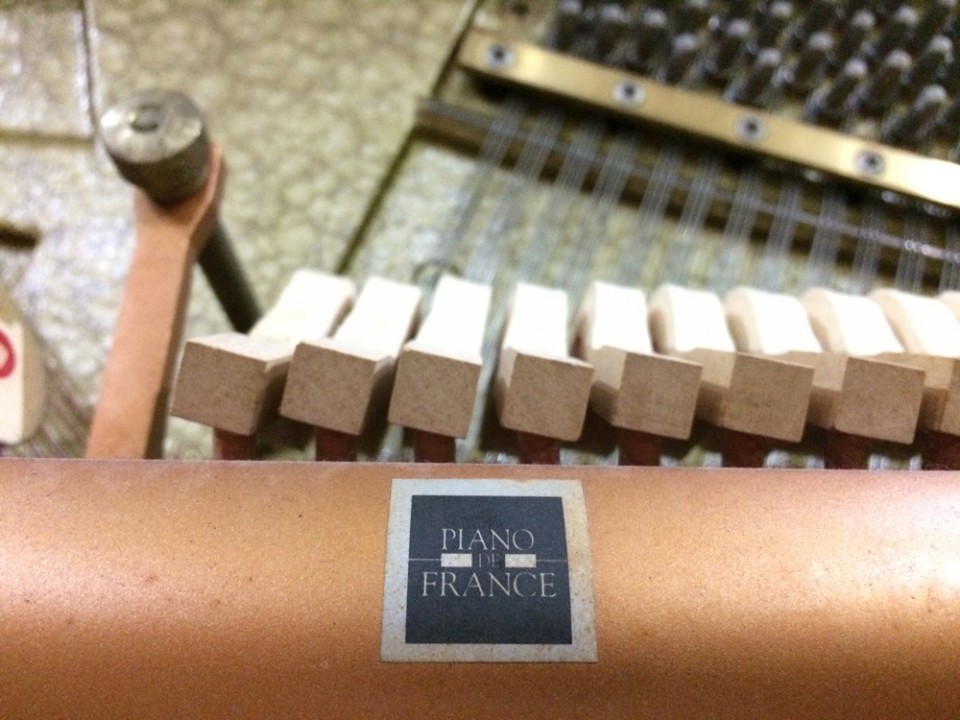 One of the 25 pianos turned to be rare French “Rameau”! The piano itself looks likewise any other old piano. Actually, its design is quite plain and minimalistic. In this piano each string of the low and middle registers has its own individual hitch pin (the pins at the lower side of the strings). Very rare! It’s such a pity that the rest of the piano manufacturers haven’t adopted the same engineering solution.

"Rameau" (pronounced as "Rah-Moh") has been named after the major French opera composer and music theorist of the Baroque era - Jean-Philippe Rameau (1683–1764). In 1982, the factory produced pianos under the brand "Pleyel - Gaveau - Erard". Actually, the French manufacture of "Pleyel" pianos is the oldest piano factory in operation in the world and is the only one still existing in France. Since the year of 1870, 250,000 "Pleyel" pianos have been manufactured. The factory was called ‘The French Manufacture of Pianos’. 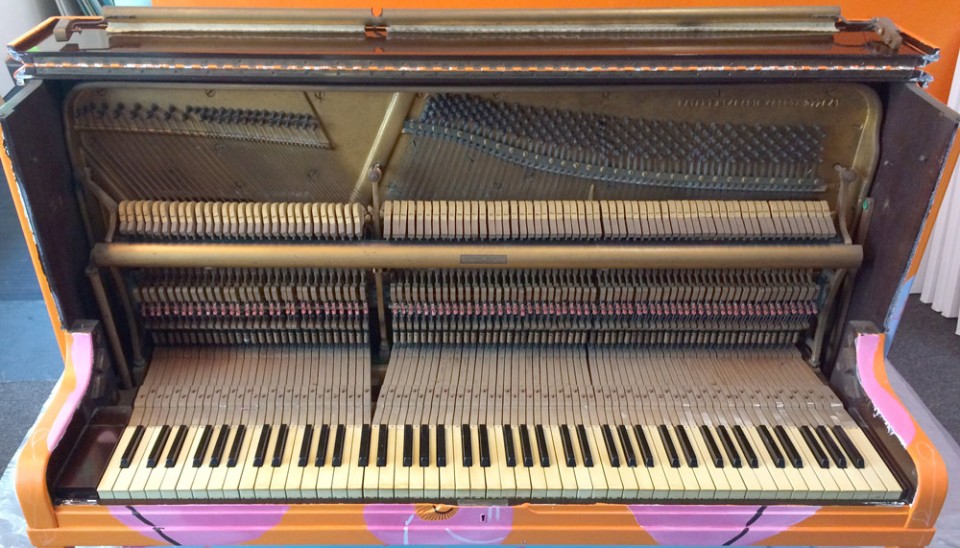 Out of the 25 pianos, there was one which is undoubtedly the oldest one – a 70 years-old English piano! Miraculously, all the keys’ action mechanics still work pretty well; however the strings and the tuning pins were so rusty and fragile that I had to carefully raise the pitch in very small increments, evenly throughout the piano compass.

This piano has never been tuned for at least 15 to 20 years probably! The total pitch initially was as low as 3 whole tones (6 semitones!) below any standard piano, so this piano could not have been able to play along with all the rest of the 24 pianos.

Since I was organising the closing gala performance with all the 25 pianos for the launch event (the collective called “Tentify”), I had to ensure that all of them are on the same pitch. To my horror, furthermore, only 10 minutes after the first tuning, the pitch dropped down halfway, so I had to actually tune this particular piano 2 more times, the last time being in the morning of the launch event itself, 13 March 2016.

Nevertheless, this piano is a real veteran, it has survived through the Second World War till today. Despite its deteriorated overall condition, it is a precious musical instrument, now – even more valuable, after being given an artistic rebirth through decoration and tuning.

A real tuning challenge I had at the children’s care centre at Ang Mo Kio where all the 30 kids in the hall were playing games, watching TV, jumping and screaming around the piano which I was tuning at the same time. Three unforgettable hours… Phew!

I was quite sure that if I’ve “survived” through it, nothing else could happen to be more challengeable. I was wrong.

Few days later, I went to a social care center where people with mental disabilities were having their routine activities while I had to tune the piano in the same activity hall. They were actually very friendly and extremely curious about my job, however I couldn’t manage to explain to them that they do not have to necessarily “help” me by singing out every single tone that I was tuning at the moment, especially when all the 30 “helpers” were singing it loudly together with the piano. Another 3 unforgettable hours, a precious piano tuning experience!

In order to tune the 6 pianos located at *SCAPE, I had to go there at 6am which is the only time when youth hip-hop dancers won’t be exercising under the loud music coming from their portable CD players. I had to use only the light coming from the nearby soft-drink vending machine since at that early time the automatic overhead lighting is off, and it was not possible to be switched on manually.

Coincidentally, in the same morning of 9 March 2016 the Sun was also not able to be “switched on” properly due to the solar eclipse which was scheduled for that day, hmm…

For this project, I took the decision to tune all the 25 pianos in the standard Equal Temperament, but in the ancient tuning pitch of A=432 Hz, which is almost a semitone lower than the usual concert pitch of A=440 Hz used nowadays.

The main reason was that all the pianos are very old and they have not been tuned and maintained in the recent years (or even decades!) at all. Thus, if I was to raise the pitch up to A=440 Hz, I would have probably ended up with lots of broken piano strings, which would have required an extensive labor, additional time and funds. This would have been a total failure for the project.

Also, even being tuned up to A=440 Hz, old pianos would normally lose their pitch almost immediately. Another concern was that after all pianos had been tuned, they were yet to be brought to the launch event by truck transportation. It is known that any shifting, moving or even smallest variations in temperature and humidity cause an adverse effect on the piano condition and its tuning, specifically.

There is one more reason why did I choose the pitch of A=432 Hz instead of A=440 Hz! But more on this subject – in another article later! 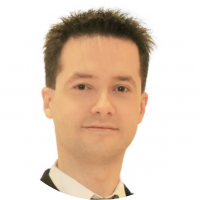 It's no good pretending that any relationship has a future if your record collections disagree violently or if your favorite films wouldn't even speak to each other if they met at a party.