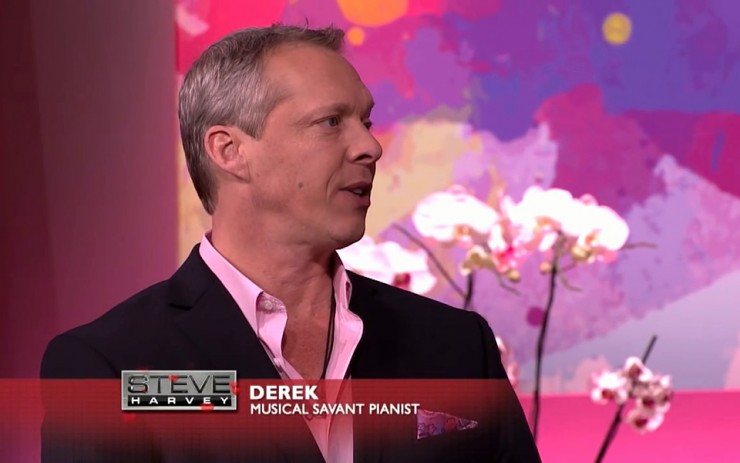 In 2006, an American man hit his head hard on a concrete floor in an accident. Although he suffered a severe concussion that resulted in partial deafness and memory loss, the experience unlocks the musical genius in him. He had never played the piano. Now, he became a pianist and composer, going on to play beautiful pieces to various audiences. He has even commercialised his skills, later released a single, then an album.

When he was 39, Derek Amato, who lived in Colorado, USA, was visiting his parents’ hometown in Sioux Falls in South Dakota when he had an impromptu game of football at his friend’s home. Standing at the edge of a swimming pool, he called out to his friend to toss the football over the water. His plan to catch the football midair and glide on the water failed miserably. Amata fell headlong onto the pool’s concrete floor. The harsh impact created such a severe concussion that he felt intense pain in his head and blood streamed from his ears.

Amata ended up in a semi-coma, drifting in and out of consciousness over the next several days. The full result of the hard knock, as it turned out weeks later, were partial deafness, frequent headaches and memory loss. However, something shocking came much earlier. Four days after the accident, he was at the home of his high school friend, one of the pals who had been with him at the swimming pool. While chatting in a makeshift music studio, Amata noticed an electronic keyboard and voluntarily gravitated towards it.

Amato had never played a piano but what happened that day was unbelievable. As he moved his fingers effortlessly over the high and low keys, he produced melodies so beautiful that people who had not known his history would have assumed that Amato had received formal music training. However, Amato really had no prior experience with the piano. Amato’s playing of his original musical composition that day touched his friend so much, he actually broke down in tears. Amato continued playing for a long six hours, before leaving his friend’s home the following morning.

Amato’s accidental discovery of his musical talent was quickly picked up by the media. Soon, he was appearing in interview and talk shows, which also invited him to play before “live” audiences. Amato’s newfound fame saw him become very busy, as he actively monetised his talent and released a single, then an album. In a talk show, to the applause of the audience, Amata paired up with a lady who was hearing impaired but brought out the emotions with her beautiful voice.

Amato’s experience mirrors that of other people who discovered their hidden talents after suffering life-threatening incidents. Today, there are 30 known individuals who experience what is known as acquired savant syndrome. In New York State, Tony Cicoria, an orthopedic was struck by lightning while using a public telephone. Soon, he discovered his passion with the classical piano and before long, he was not only playing but also composing music. Orlando Serrell was hit by a baseball on the head and henceforth, could name the day of the week for any given date. Another person, Alonzo Clemons, suffered permanent brain damage owing to a bad fall, however, he discovered his talent for sculpting lifelike replicas of animals.

Till this day, the scientific community has no clear explanation for acquired savant syndrome. Various hypotheses have been put forward. One suggests that the impact from a direct hit on the head disables the part of the left brain which determines logic, and filters what comes out from the right brain, which is associated with creativity. With the filter disabled, artistic expression flows unhindered and manifests itself as beautiful music and sculptures.

Another hypothesis suggests that the physical impact releases neurotransmitters that create new pathways within the brain that tap into the embedded talent. Whatever is the correct explanation, it is clear that in these 30 people, the unfortunate physical knocks unearthed new talents and set them onto new paths in life.

In Amato’s case, up to the day of the fall, he had had absolutely no clue of his direction in life. He had tried various jobs, including stints in sales, baseball coaching and public relations. At one point, he was even homeless, spending his nights on the streets. The fateful day at the pool changed his life forever.

A musician must make music, an artist must paint, a poet must write, if he is to be ultimately at peace with himself.