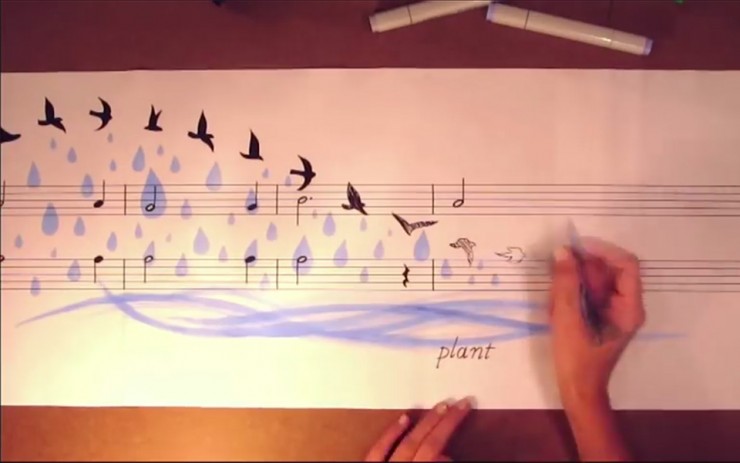 Italian musician and artist Alice Ninni created an artistic sensation of sorts in the world of music in December 2010. By combining colourful drawings with beautiful music, she provided a visual, artistic dimension to the otherwise aural masterpiece, while also telling a story with an environmental message. Basing her work on the piece Lacrime di Giulietta by composer Matteo Negrin, Alice created the visual representation of the song by painstakingly painting notes and pictures on music scores. Notes for both the accordion and the guitar were accurately reproduced, along with accompanying beautiful graphics that were creatively blended into the sheet music. In all, 30 sheets of A3 paper, joined together into a continuous trail, were used. Filming took place over a 15-hour period and a labourious postediting process shortened the resulting video into a beautiful, four-minute clip.

When played, the clip presents a visual representation of the actual song. Each audio note heard is skillfully synchronised with the drawing of the corresponding note in the video. While some drawings are independent of the music, others are weaved into it. Some of these audio-visual integration efforts are obvious, like the pairing of the drawing of tree leaves with the fast piano keys occuring in the middle of the track. There are less obvious but noteworthy parts too. Observant viewers will notice how some notes turn into the wheels of cars and stigmas of flowers. Others will marvel at the double barlines that become part of construction scaffolding. Watched in its entirety, the video vididly tells the story of how beautiful Mother Nature has given way to destruction in the wake of relentless industrialisation and technological advancement. It brings home the message that although human advancement brings indisputable benefits, it also takes place at great cost to the environment. The clip ends with subtle exhortations encouraging the viewer to plant a tree and enjoy nature.

While this beautiful artistic rendition of a musical piece by the talented Alice Ninni carries poignant reminders of the disastrous effects of misguided human deeds, it is nonetheless a colourful celebration of the creative convergence of art and music. Put together, they bring out not only the essence of the musical composition but also the imaginative abilities of the artist. This potent combination has been very well-received, with the YouTube upload having received almost 3.6 million views to date. This artistic work of art is not only a treasure in its own right, it may have even set a precedent in the creative industries. In a move that could have been inspired by Alice Ninni’s work, Volkswagen released a marketing video as part of a campaign known as "VW Think Blue Campaign" that promoted its range of blue-themed vehicles.

The artistic concept featured in this clip, released eight months after Alice Ninni’s was made public, bore a remarkable resemblence to that of the artist’s work. The lively commercial featured a time-lapse video of an artist decorating musical scores with tones and drawings, before ending with a message reinforcing the "Think Blue" catchphrase. With creative talents in abundance around us, more innovative ideas that add new dimensions to music as we know it can surely be expected in the future.

First of all, the music that people call Latin or Spanish is really African. So Black people need to get the credit for that.