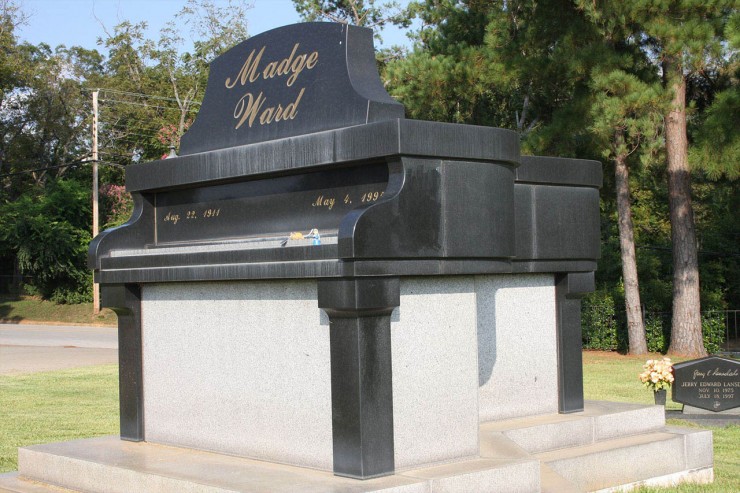 Few things would leave a visual legacy long after a person dies as effectively as a tombstone. Made of granite, a tombstone is usually nondescript, featuring the details of the deceased but little else. The lack of striking features means that visitors to a cemetery often see rows upon rows of similar-looking graves.

One resting place in the United States, however, is not only striking but also leaves behind a huge reminder of what the deceased did in her lifetime. The Rose Hill Cemetery in Tyler, a city in the state of Texas, contains a piano-shaped tombstone that may well be the only one of its kind in the world. Sleek and black, this 8-foot tall, 25-foot wide granite piano weighs 25 tonnes and is so prominent that people come from afar just to see it. Locals point the tomb out to their visiting friends, while people from other towns rent minivans to have a look at this special monument. It has been said that even the occasional tour bus stops here so visitors can take quick photographs for posterity.

This piano tomb belongs to Dr Madge Ward, a pianist who lived from 1911 to 1995. It is said that Ward lived a grand life and always had music and a keyboard with her wherever she went. Ward had a career that revolved around piano and lifestyle, putting her musical abilities and talent to good use. Not only did she teach music in Tyler’s public schools, she also entertained during the grand opening events of various clubs and resorts. Dr Ward even took her musical skills to the sea, often playing on cruise ships. Dr Ward was known as a very lively person and a remarkable, well-loved young teacher.

Although Dr Ward was awarded several contracts and frequently performed at dinner clubs and various locations around the world, her music career had its roots in providing services for the local community. For three years, between 1943 and 1946, she worked at Camp Fannin, an infantry training centre that provided troops for America’s war effort. In that role, Dr Ward facilitated the provision of much-needed entertainment for lonely soldiers who passed through the centre.

Dr Ward knew that she had lived her life as an accomplished pianist, piano teacher and entertainer. When she was getting old, she wanted a piano-themed mausoleum to allow herself to be remembered with. Although the exact cost of her special tomb was not disclosed, it is understand that a customised fixture like this typically cost tens of thousands of dollars, a sum that she had reported saved for 35 years. When planning for this tomb, she initially faced objections from the local officials but was later given the go-ahead.

Dr Ward did not get to see the final product, having only seen sketches and photographs as the cutting was performed in a different location. The granite piano was set only after her demise. Although local residents complained about the individualistic nature of her grave marker, Dr Ward had managed to leave a legacy.

As Mary Jane McNamara, Tyler’s local historian remarked, "Every time I drive by and I look at it and think, ‘Well, Madge, honey, you won. You are right in the limelight where you always loved to be.'"

My music fights against the system that teaches to live and die.