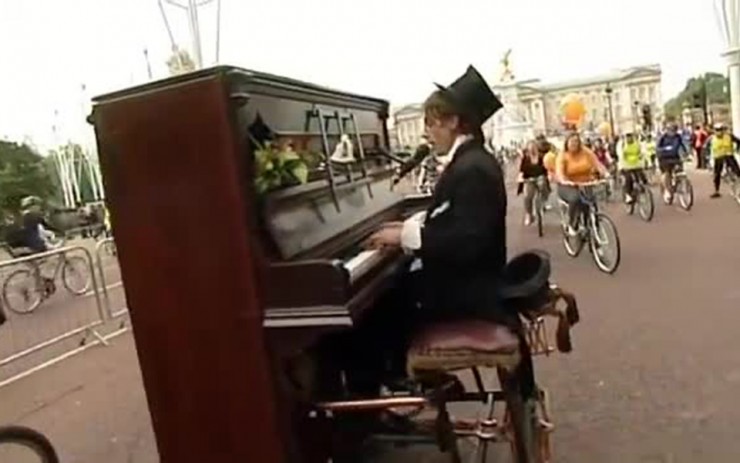 Music has entertained people for as long as civilisations have existed. Piano music, in particular, has accompanied events, festivals and weddings, making it a much-appreciated accompaniment for the day. Some musicians, in a departure from playing in a sombre music hall, have successfully given their performances a playful twist. In Britain, a talented German musician Rainer Hersch has incorporated everyday things from Microsoft Windows jingles to a British Airways television commercial soundtrack into his orchestra music. Not far away in Germany, the comedian pair Ass-Dur play their music with the added amusement of changing in and out of clothes, much to the amazement of ladies.

In videos that have appeared on the Internet, he is seen peddling backwards – opposite of what cyclists normally do – and moving entire device leftwards. Given that the man has to constantly look out for traffic with his peripheral vision, one must surely give it to him for accomplishing such a feat!

It is amazing how music not only entertains people in the ways it is meant to entertain, but how its performers adapt it to suit their personalities and transform it in ways that one never imagined possible. Music and creativity go hand in hand, and when put together, they create magic that inspire people and leave them in awe.

You see Michelangelo and Picasso and you read literature. I had some innate inchoate yearning for that, but I never really saw where I would fit in. That's called art. And then something happened to pop music, which is that it became art under the hand of the Beatles, the Stones, and Bob Dylan and some other people.