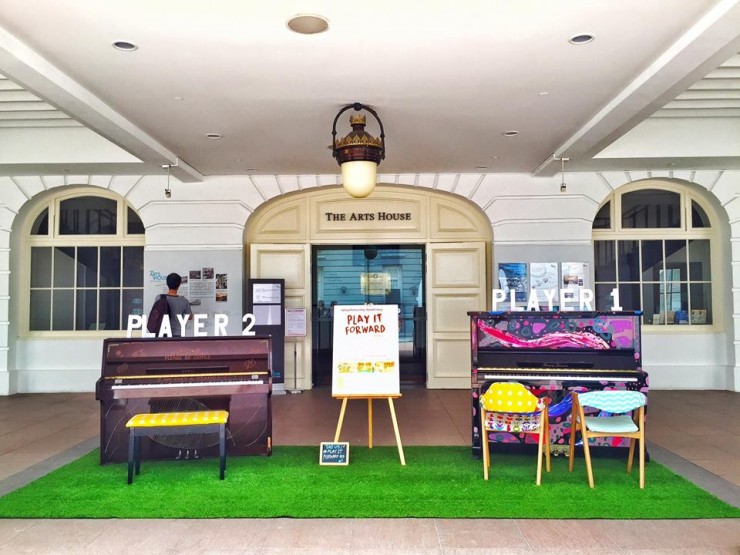 There's something special about walking past 2 pianos placed in the public where you can just sit down and start playing them. Because in Singapore, this is truly a rare sight. And I believe Play It Forward - SG could possibily be the first initiative that makes public playing piano in Singapore a reality. Awesome!

In other parts of the world, public piano playing isn't uncommon. Street Pianos says that ‘Play Me, I’m Yours’ was first commissioned by Fierce Earth in Birmingham, UK in 2008. With 15 pianos located across the city for three weeks it is estimated that over 140,000 people played or listened to music from the pianos. Since then ‘Play Me, I’m Yours’ has reached an estimated eight million people worldwide. Each new city that commissions the artwork becomes part of this growing international legacy.

In Singapore, we have Jean Hair, Billy Soh, and Lee Yan Chang. In their studying years in the National University of Singapore (NUS), they had joined the NUS Piano Ensemble (NUSPE), a performing group which seeks to promote the appreciation of piano ensemble music, provide opportunities for aspiring pianists to perform and give its members the novel experience of playing in collaboration with different people. Now, although their daily jobs are not related to piano, they still have a great love for piano playing and eventually formed Play It Forward - SG.

The trio believes that, instead of letting the old pianos collect dust at one corner of the house, they could be given a new life. Play it Forward is a creative project initiated by a group of passionate local artists and designers to transform old, unwanted pianos into art pieces and place them in public spaces for everyone to enjoy, 24 hours a day! The pianos will eventually be donated to needy institutions where the pianos can continue to benefit people who do not often have access to a music instrument.

Its debut appearance was at Aliwal Street on PARK(ing) Day on 18 Sep 2015, an event supported by Urban Redevelopment Authorithy (URA) and Housing Development Board (HDB), when people transform parking lots into temporary public spaces. The 2 pianos on display were donated by Wii Hon and David Chew, and creatively painted and drilled (yes) by Bridget Tay and Billy Soh.

Because a lot of positive reviews and feedbacks were collected, URA continues to support their cause and the pianos has travelled to many places in the city! Below is a list of the footprints, and future ones too.

On its Facebook Page, many pictures and videos of people from all walks of life playing on the public pianos were posted and shared. New friends were made through playing the pianos too. A local chinese newspaper - Zaobao, 新加坡《联合早报》- took an interest in this project as well, and wrote an article, 回收旧钢琴-让音符再次传送, published on 17 Oct 2015.

For me, meeting these three old friends at the Empress Lawn, outside Victoria Concert Hall, with the 2 pianos beside us, got me feeling nostalgic, because it was a good reminiscent of the days in NUS Piano Ensemble when we used to crowd around pianos to jam and to have fun.

I would love to continue in music, with writing... but I am not the kind of person who will hang around if I start to become irrelevant. If that happens, I will bow down gracefully, raise my kids, and have a garden. And I am going to let my hair go gray when I am older. I don't need to be blonde when I'm 60!