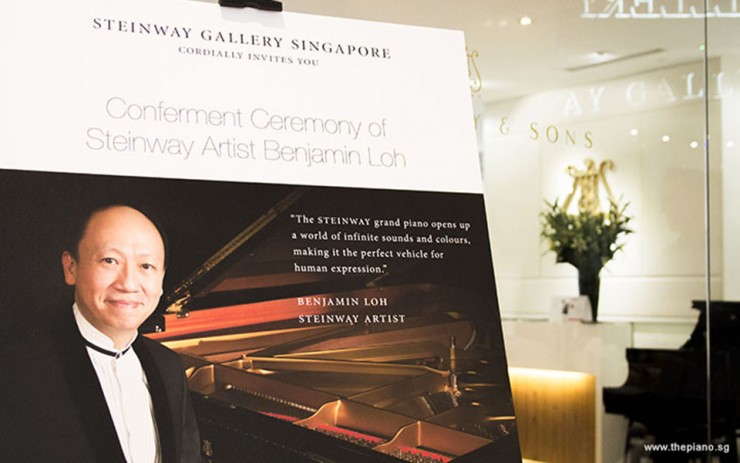 Highly acclaimed Singaporean pianist and distinguished music educator, Benjamin Loh, has officially been conferred the title of Steinway Artist on 9 December 2016 by Steinway & Sons. Benjamin will now join the prestigious international roster with over 1,600 leading musicians such as Vladimir Horowitz, Arthur Rubinstein, and Martha Argerich and have access to the worldwide resources of Steinway & Sons and its exclusive network of dealers.

“The crème de la crème of talented musicians around the world are conferred the distinction of this affiliation with the Steinway Artist family,” said Celine Goh, General Manager of Steinway Gallery Singapore. “Benjamin Loh is now the first locally domiciled Singaporean Classical Steinway Artist. Without doubt, his contributions to the music education scene has been remarkable and he has produced many award-winning students in Singapore”.

As part of the official appointment procedure, Steinway Gallery Singapore has hosted a Steinway Artist Conferment Ceremony for Benjamin on Sunday, 26 March 2017 at its Palais Renaissance premises. A proud owner of the Steinway Model A-188, Benjamin says “The Steinway grand opens up a world of infinite sounds and colours, making it the perfect vehicle for human expression”. ThePiano.SG was there as well to cover the event and partake in the joy.

“I am, indeed, honoured to be named a Steinway Artist, and I look forward to collaborating with Steinway Gallery in their upcoming projects” said Benjamin Loh who feels that teaching has always been a calling for him. While performing has its feel-good factor, teaching is very rewarding in that he can make a difference in a student’s life, where he often finds himself going beyond teaching music to helping students navigate through life’s obstacles and instilling proper values.

As a sought after music educator, he has been invited to give lectures and master classes around the world, not only in Singapore, but in Malaysia, Indonesia, Thailand, Hong Kong, Taiwan, South Korea, Japan, Italy and the U.S.A. This coming July, he will be teaching at the Costa Rica Piano Festival in Central America and at the Hotchkiss Summer Program in the U.S.A.

Presently on the piano faculty of the Nanyang Academy of Fine Arts and the LASALLE College of the Arts while maintaining an active private teaching studio, Benjamin was given the Special Recognition Award in 2005 by the Ministry of Information, Communications and the Arts (MICA) for his contributions to the National Arts Council.

Besides teaching, Benjamin understands the importance of living healthy, hits the gym at least twice a week, watches movies on weekend and enjoys exploring new eating places with friends.

Presented by Steinway Gallery Singapore, the Steinway Lecture Series is a holistic music education program that aims to provide new perspectives for teachers and students with an in-depth focus on selected piano topics and repertoire, along with fresh new ways for students to connect these better to the aims of their learning and performance.

The lecture series will also allow participants to discover new ways of understanding music, the connection with it, and to apply that understanding to their musical education through Steinway’s latest technology – The Steinway Spirio where it provides many music learning elements that are integral and indisputable to being a well-rounded musician.

Benjamin has since been enthusiastically curating a truly exceptional learning experience that combines his wealth of musical knowledge with the Spirio.
In addition, he has been invited to record on the Spirio in New York City on the 25 July 2017 where he will be recording Leonard Bernstein’s “Touches”. “To have my recording listed alongside other Steinway Artists is, indeed, an honour” said Benjamin Loh.

“I can imagine how much depth and understanding of classical music he would bring to his students when he delivers his teachings alongside references from literally 'LIVE' playback of legendary artists such as Arthur Rubenstein, Horowitz, Van Cliburn and many more current classical super star concert pianists” said Celine Goh.

Benjamin’s Spirio recording will be released later in Q3 of this year.

ThePiano.SG would like to take this opportunity to congratulate him on being conferred, as well as wish him the best for all his future endeavours in his musical journey ahead.

Like music and art, love of nature is a common language that can transcend political or social boundaries.