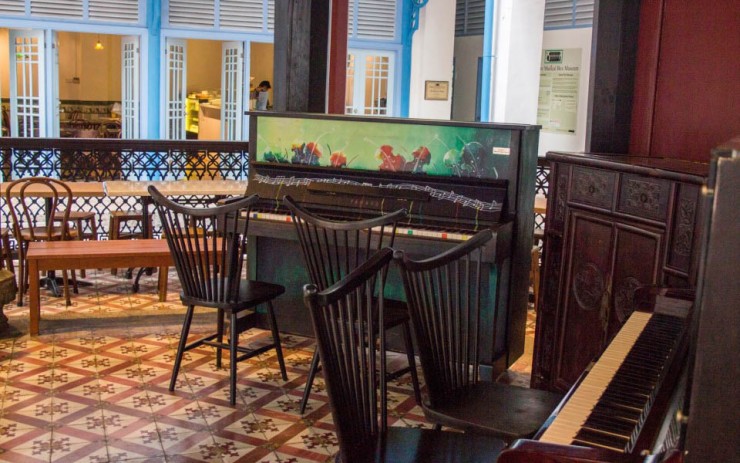 On the 27th of November 2016, 5.5km of roads in Singapore were closed to create a pedestrian-friendly precinct for a fun-filled Car-Free Sunday, an event usually held on the last Sunday of each month. Roads around the civic district and Central Business District became open grounds for activities such as cycling, mass workouts, guided tours, performances and interactive events including piano playing!

The day before, pianos which are usually placed at the URA Centre’s Piano Park were moved by Play It Forward Singapore to Chong Wen Ge (崇文阁) on Telok Ayer Street, making this special Car-Free Sunday not only pedestrian-friendly, but pianist-friendly as well!

Play It Forward Singapore is a local initiative that has brought the delight of music to Singapore’s public spaces through refurbishing unwanted pianos and placing them all over the island for everybody’s enjoyment. Aside from bringing these community-bonding pianos on tours of urban spaces in the city, they also organise well-received events which centre on public piano playing, such as Open Studio Friday. Since their debut in September 2015, Play It Forward Singapore has already taken their beloved pianos on three successful tours around Singapore.

Chong Wen Ge was a remarkable place for Play It Forward Singapore to bring their pianos, being a heritage spot that holds special significance in Singapore for several reasons. Chong Wen Ge was founded by pioneer Tan Kim Seng in 1849 as Singapore’s first Chinese school. Now no longer a school, the building houses Singapore’s first musical box museum as well as a Peranakan-themed museum instead. Located beside the Thian Hock Keng temple, the museum includes a popular Peranakan café and the Peranakan Tiles Gallery.

In pursuit of these roving pianos, Sng Yong Meng arrived at Chong Wen Ge Café on this Car-Free Sunday at 8am. After ordering a cup of tea, he occupied himself by snapping photos of the scenic location until Lee Yan Chang arrived at 8.30am. Yan Chang is one of the trio who founded Play It Forward Singapore, and a fellow NUS Piano Ensemble Alumni member who had known Yong Meng since their student days in University.

As the two of them enjoyed a traditional Peranakan breakfast of Mee Siam and Laksa, their conversation were soon accompanied by live piano music. A steady stream of people wandered into Chong Wen Ge, drawn to the pagoda where a pair of pretty pianos welcomed passing players, spontaneous singers and curious onlookers alike.

Finishing their meal, Yong Meng and Yan Chang strolled out of Chong Wen Ge to observe more musical activity in the vicinity. A stone’s throw away, Joseph Lim and his friend Kenneth Xiao had been entertaining passers-by since 9am, belting out melody after melody on voice and keyboard. Joseph is a full-time busker who regularly attends Pianovers Meetups. He didn’t even miss the one held that very night!

Yong Meng had to bid farewell to Yan Chang at last, in order to make his way back to The URA Centre to prepare for the next Pianovers Meetup. By 5pm, the adventuring pianos had found their way back to their usual place at the Piano Park, well in time for Pianovers Meetup #18!

When I started getting so many haters and closed doors, I decided to prove that it could be done. I was a divorced single mother of three at the time and a size 12 - not your typical model artist that labels feel work for the music industry.