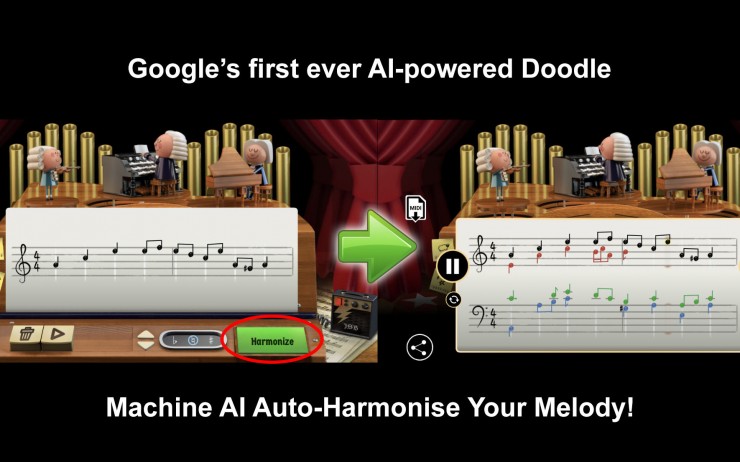 Music fans would probably be aware of the celebration of baroque composer Johann Sebastian Bach's birthday every March. This year, we celebrate the late German composer's 334th birthday, and Bach fans had an unexpected treat.

On 21 March 2019, IT giant Google released its first AI-powered Doodle, which allows music lovers to input their custom melody. The software, created between Google Magenta and Google PAIR teams, then uses machine learning to harmonise the custom melody into Bach's signature music style.

Then, you may be asking, how was such a program created? The key to creating it was truly based on machine learning. Unlike traditional computer programming, where programmers feed the computer with a set of rules to follow, Google's engineers gave a large set of examples to the computer, thereby allowing it to study the patterns and come up with its own answers.

In the case of Bach Doodle, the model employed was known as Coconet. This was a versatile model that has many uses across a wide range of music-related tasks. Examples include harmonising melodies or even composing from scratch.

The Google teams specifically fed the machine with 306 of Bach's chorales. Bach's chorale compositions are known to carry four voices. While each voice has its own melody, the four voices combine to form a rich harmonic progression. This particular melodic structure became good training data candidates for a machine learning model.

Go ahead and try to create your own composition. Input some tunes and watch how Bach Doodle harmonises your piece in Bach's famed style!

On 24 March 2019, Pianovers Meetup #115 also celebrated Bach's birthday with a themed Meetup, where Pianovers (piano lovers) are encouraged to perform pieces by Bach. We joined many other countries around the world, in the "Bach In The Subways" global movement, in this celebration. Performances for the evening include the following, but we must really point out that, since 1970, it has been discovered that Minuet in G is not composed by JS Bach, but by Christian Petzold.

Pianovers Meetup is a weekly meetup at Urban Park @ URA Centre organised by ThePiano.SG to make a positive impact on a national level:

Pianovers Meetup is a free public event, where anyone who walks past is welcome to join in. More importantly, the zero cost means even the financially challenged will find this platform accessible, and regardless of their financial background, can benefit from the best opportunities Pianovers Meetup offers.

This outdoor event also doubles as an activity hub where people connect and bond and reinforce their friendships with one another. Pianovers Meetup is more than simply connecting people via a piano community. We also strengthen the Singapore spirit, and more importantly, build social cohesion and promoting racial harmony, by bringing people of different races, languages and religions together and indulging in common music-themed activities in a common space.

Johann Sebastian Bach (1685 – 1750) was a musician and composer. He was born in Germany during the Baroque period and was known for instrumental compositions.

Bach’s famous works included the Art of Fugue, the Brandenburg Concertos and the Goldberg Variations. Bach was also known for vocal music such as the St Matthew Passion and the Mass in B minor. After a brief decline, there was a revival of Bach’s music in the 1800s. This period was known as the Bach Revival and since then, Bach has been regarded as one of the greatest composers of all time, with over 1,000 known compositions.

One of Bach’s famous compositions was The Well-Tempered Clavier (Das Wohltemperirte Clavier). This set became so popular that it attracted many composers and players. In particular, Lugwin van Beethoven performed the full set by the time he was eleven. Frédéric Chopin, Dmitri Shostakovich and other well-known composers were also inspired by this work. One by one, they wrote their own preludes.

Sometimes I'll have sections that I'm not quite sure how they fit in the puzzle of a tune, they'll get moved around; what I think was originally a verse ends up becoming the chorus, or what's an intro gets dropped as a hook, things get shifted around a lot.