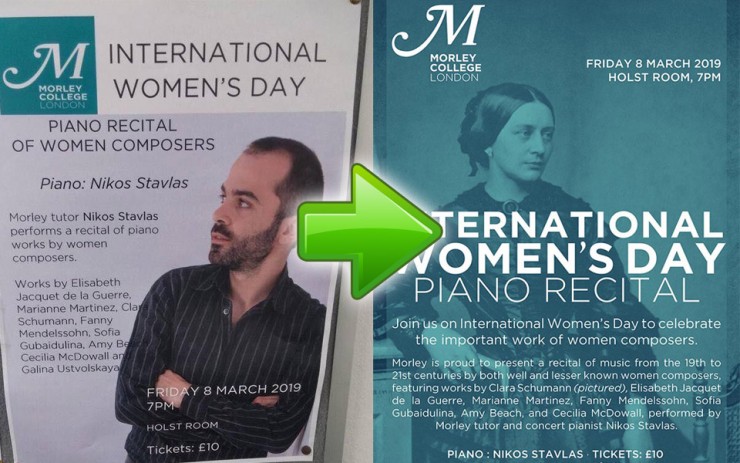 Recently, Morley College in London was planning to put on an event celebrating International Women's Day when it unintentionally caused a public relations uproar. The college had produced a poster featuring a male pianist and no women performing on what was supposed to be a day celebrating women. Female activitists immediately took issue to this.

The poster that Morley College used shows its piano tutor Nikos Stavlas as the pianist for the event, along with the heading “International Women’s Day” and the event title “Piano Recital of Women Composers”.

Jessica Eaton, a speaker and author, displayed her unhappiness on Twitter on 4 March 2019 by reproducing the poster and a series of emojis with eyes rolled upwards.

Soon after the incident, Morley College issued a statement to clarify its intention. The College stated the poster that had been used was an older and unapproved version. Upon realising the mistake, all the original posters had been removed and replaced by one that showcased the composers whose works would be performed.

The College went on to defend the male tutor himself. According to the College, Nikos, who specialises in the works of female composers who had not been given recognition, actively campaigns for women’s equality. In particular, he is passionate about showcasing underrepresented female composers.

It went on to state that Nikos had proposed the concert as a means of giving these overlooked women composers a chance for their music to be heard. In comparison with the bigger feminist cause, the fact that a male pianist takes to the stage takes on far less importance.

In the same statement, Morley College also highlighted that it has a tradition of supporting women’s works and that it has more women than men, in both its staff and student population.

Morley reminded the readers that in 2015, it had launched the Women Conductors Course in conjunction with the Royal Philharmonic Society. The intention then had been to bring more women into a male-dominated role in music performance.

Going forward, the College will be holding a Penny Lecture for International Women’s Day, in honour of Virginia Woolf.

As for the poster incident, the College apologised for the design of the original poster and the subsequent unhappiness it had caused. It called the incident “an error of judgement”, which it would “take great care” to avoid.

Once you've changed who you are or who you've portrayed in your music, the fans, they'll catch it... Once I feel like the world knows me for anything else but my music, then I feel like I failed.