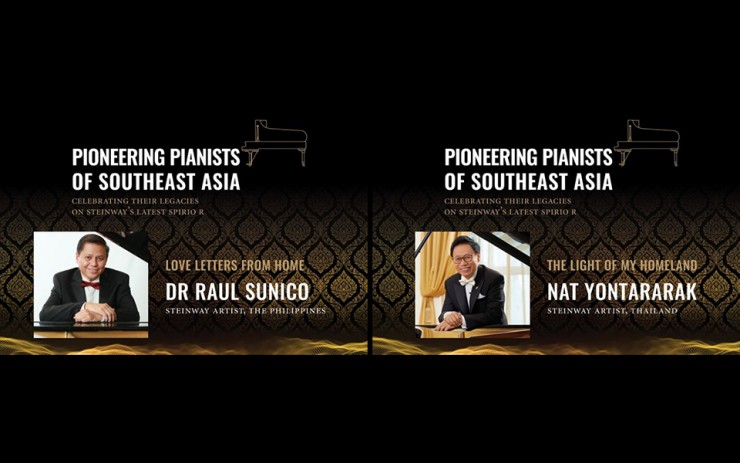 Pioneering Pianists of Southeast Asia, presented by Steinway Gallery Singapore on June 3 and 4 at Victoria Concert Hall, is a platform that recognises the efforts of a generation of pianists who have established a presence for the region in the international music scene through their pianism and advocacy of cultural heritage through the piano.

Through this platform, Steinway Artists Dr Raul Sunico from the Philippines and Nat Yontararak from Thailand will celebrate their legacies using the latest Steinway's proprietary technology to perform, record and perfect their artistry, thus demonstrating the widened possibilities for the promotion of cultural heritage.

“Steinway’s culture of innovation has truly reached its pinnacle through SPIRIO|r, which provides artists with the capabilities to perform, record, and perfect their performance in a groundbreaking new way,” states Steinway & Sons’ President and CEO, Ron Losby.

Both Dr Sunico and Yontararak first established their careers in their inimitable performances of the Western classical repertoire. Yet while they still continue to do so – Sunico for instance is lauded for being the only pianist to perform all four Rachmaninoff piano concertos in a single evening and Yontararak runs the Siam International Piano Competition – they have turned towards making arrangements of the popular and folk music from their respective cultures in the vein of Western classical idiom to popularise Western music as well as music of their own cultural heritage.

The latest evolution of Steinway’s SPIRIO innovation enables any pianist to record, edit, playback, and save their performances in a high-resolution format. The SPIRIO|r records and delivers the most accurate reproduction of a live performance ever achieved on a Steinway. This opens up a world of possibilities not just in terms of performance but also in teaching and innovating, allowing musicians such as Dr Raul M Sunico and Nat Yontararak to pass on their legacies to future generations. At their concerts, the two Steinway Artists will thus demonstrate the high-resolution performance, recording and editing capabilities of the SPIRIO|r.

"The artists have provided vital leadership in cultural philanthropy by demonstrating different ways of passing down cultural music heritage using Steinway's latest SPIRIO|r. Their experiences, to us, embody the most ideal relationship between generations,” Ms Goh adds.

“Never before have artists been able to capture the nuance and soul of their playing so precisely on a Steinway. As the maker of the world’s finest piano, we are proud to introduce this new evolution of our beloved instrument, and look forward to opportunities this technology will bring to professional and amateur pianists alike,” Mr Losby adds.

About the Pioneering Pianists of Southeast Asia concerts

The two artists will be performing at Victoria Concert Hall on June 3 and 4 respectively. Over two nights, western classical pieces will be performed alongside the artists’ own compositions and arrangements.

In Love Letters From Home on June 3, Dr Raul Sunico will play a series of familiar classics as well as his renditions of Filipino folk music.

Besides playing Rachmaninoff’s Prelude in C-sharp minor, op. 3 no. 2 and Gershwin’s Rhapsody in Blue, the Steinway Artist will also play familiar Filipino folk songs, such as Buhat and Bato sa Buhangin.

On June 4, The Light of My Homeland will be a heartfelt expression of Thai pianist Nat Yontararak’s love and respect for the late King and his homeland. Yontararak will be playing his arrangements of the late King Bhumibol’s “Love in Spring” and “Somewhere, Somehow” as well as his own compositions inspired by Thai folk music on the SPIRIO|r.

The Silpathorn Award recipient, an award presented by the Thai Ministry of Culture in recognition for his dedication to music, will also have Thai traditional dancers accompanying his composition, Piano Sonata No.1 "Glory to our Great Kings", 4th movement.

Launch of video trailers recording the pianists’ milestones and legacies

In the lead-up to their concerts, Steinway Gallery Singapore will launch six short video trailers on the two pianists. The 3x180second segments (total 9 minutes) for each musician to be launched over three weeks in May will offer insights into their life’s work, and how they are passing on their legacies with the SPIRIO|r.

The video trailers will focus on these themes: Playing Back a Legacy, Recording a Milestone, and Passing on the Touch and Virtuosity.

The video trailers for Yontararak will introduce how Thai royal patronage helped develop his career, how he established himself as a classical musician in a country not known for Western classical music, and his contributions to the teaching of music in Thailand. The trailers also explore how he would use the SPIRIO|r to teach and pass on his musical legacy to his students and a wider audience.

The video trailers for Dr Sunico will showcase the milestones of his career and how he has merged Filipino folk music into a Western classical framework, how SPIRIO’s recording function is able to capture the sonic fidelity and virtuosity of his playing, and how the editing function allows him to experiment during his compositional process.

“With the availability of such technology in the SPIRIO|r, more people would now be able to hear the sound and tone of Thai characteristics on the SPIRIO. It allows me to share and exchange new ideas for my original compositions with a wider audience. I believe this will be my legacy -- not only for Thai people, but for people abroad as well,” notes Yontararak.

“The new SPIRIO|r from Steinway is an amazing instrument and musical tool for musicians at every level. Whether they’re professional pianists or still developing musically,” says Dr Sunico.

“Being able to hear the nuances of my own performance immediately, through the high-resolution playback that can change many things, it allows me to hear what the audience hears so I can refine my performance. Such in-depth review was never possible before,” he notes.

It's easy to play any musical instrument: all you have to do is touch the right key at the right time and the instrument will play itself.