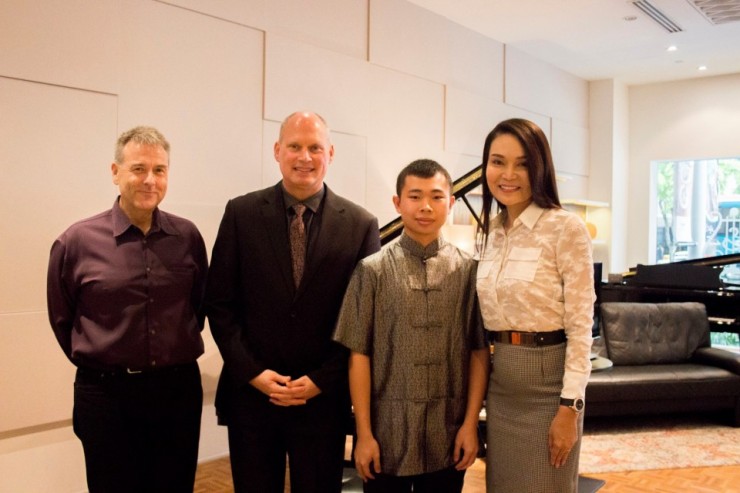 Before this honour, Mervyn's musical ability was already well-known. A third-year performance major at the Yong Siew Toh Conservatory of Music (YST), Mervyn was recently named first prize winner of the Conservatory’s 2015 Piano Concerto Competition. In the same year, he triumphed at the National Piano Competition in the Senior Piano Category.

Mervyn's affinity with Steinway began much earlier; he gave his first public performance at the tender age of ten during the "#1 Steinway" Roadshow held at YST. A year later, he made his Singapore Symphony Orchestra (SSO) debut and performed at the President’s Young Performers’ Concert 2009 where he played Haydn's D major piano concerto with his own cadenzas, making him the second youngest soloist ever to appear with the SSO. Since then, he has participated in various eminent music festivals, winning top prizes and accolades along the way. Mervyn's musical gifts have been recognised by the Straits Times, which commended him when in the course of a recital, he was able to achieve "lyricism that held one's attention" "without hammering or brute force", and most importantly, he "found [a] work's "heart and soul", realising what "striving to become a true musician and artist [was] all about".

Since the age of eight, Mervyn has been a protégé of Professor Thomas Hecht, a mentorship that has proven to be very fruitful. Professor Hecht himself is a world-renowned pianist who was invited to Singapore in 2003 as the Yong Siew Toh’s Conservatory’s founding Head of Piano Studies. With three decades of international experience as concerto soloist, recitalist, chamber musician and one half of the acclaimed piano duo Hecht and Shapiro, he has performed in many of the world's cultural centres. His merits and many noteworthy achievements were recently celebrated at Peabody where he was presented with the coveted Young Maestro Award, which honoured alumni who have distinguished themselves in their performing careers.

Mervyn's conferment was held at the Steinway Gallery Singapore on 1st October, 2016, in an intimate ceremony attended by his family, close friends and other Professors from YST. Finalists from previous Steinway Youth Piano Competitions also arrived to congratulate Mervyn. ThePiano.SG was there as well to cover the event and partake in the joy.

Festivities were kick-started by the General Manager at Steinway Gallery Singapore, Miss Celine Goh, who inaugurated the event with much geniality before gifting Mervyn with a Steinway keychain, cordially congratulating him and inducting him into the family of Young Steinway Artists.

Then it was Mervyn's turn to shine as he regaled all who were present with select piano pieces played with trademark aplomb and mastery. The ceremony followed onscreen with a video testimonial done by Gerrit Glaner, Director of Concert and Artist Department in Hamburg, who earnestly praised Mervyn for his inclusion into the celebrated ranks of Steinway artists.

Professor Hecht too paid tribute with the help of technology, a slideshow chronicling Mervyn's route to progress in the musical world. In a touching gesture, the teacher presented the student with a gift of his own.

Finally, it was Mervyn's turn to speak. He revealed the high regard he had for Steinway, not only for their pianos, but also for their unwavering patronage and encouragement. He was also enthusiastic about future prospects as a Young Steinway Artist and looked forward to upcoming collaborative projects with Steinway. It was a fitting end to a glamourous occasion.

In spite of his success, Mervyn has remained humble and attributes his accomplishments to his parents’ understanding and Professor Hecht’s mentorship. ThePiano.SG would like to take this opportunity to congratulate him on being conferred, as well as wish him the best for all his future endeavours in his musical journey ahead.

I was irrevocably betrothed to laughter, the sound of which has always seemed to me as the most civilised music in the world.