How Does A Piano Work | ThePiano.SG
Skip to main content 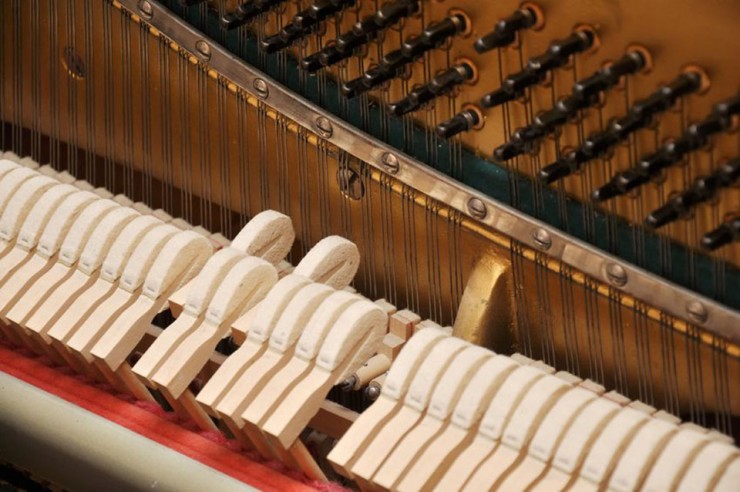 Most of us know, generally, that the piano has black and white keys, and there are upright and grand pianos. But here's the interesting question - have you ever seen the insides of it, and understand how the many parts come together to produce the familiar piano sounds where pieces like Mozart's Turkish March, Beethoven's Fur Elise, Chopin's Revoluntionary Etude, and more; are based upon?

It's a good time to stress now, that a silent piano operates differently from an acoustic piano, and we endeavour to understand the latter in this Read. The history of the piano would be covered in another.

A piano is essentially a percussion instrument that relies on the hammer action: that is, when a key is pressed, the hammer strikes the strings, and the sound is produced because of the vibrations of the strings.

And since the fundamental frequency of a string depends on the its length, tension, and mass per unit length; if any of these three properties is altered, the sound quality will change as well. This is why the strings are of different lengths across the keys - longer strings for the bass notes on the left of the piano; and of different thickness - thicker on the left.

The sustain pedal (most right of the 3 pedals) is used most often. When it is depressed, all dampers are lifted up! This obviously now allows all the strings to vibrate freely, and the sounds last until they have decayed naturally or the sustain pedal is released. Thus, when a succession of keys are hit, the sounds seem to overlap.

The soft pedal (most left) is interesting. On most upright pianos, you don't visually see any immediate effect. However, you would see a slight shift of the keyboard towards the right in a grand piano. That slight shift causes the hammer to strike one string (una corda), instead of three (tre corde) for some notes normally, and the sounds are now produced softer. For bass notes which only has one string to begin with, the hammer now hits a lesser used portion of the string. You must be wondering - how do those pianos with keyboards that do not shift towards right, achieve a similar effect? The hammers, in this case, are moved closer to the strings, so that the reduced distance between them also diminishes the speed at which they strike the strings, consequently producing softer sounds. Note that, however, the tone quality does not change in the same way the soft pedal does in a grand piano.

The sostenuto pedal (middle) sustains selected notes. It is absent in most upright pianos which replaces it with practice pedal instead. In this case, a muffler rail of felt is placed between the hammers and the strings, so that the sounds are significantly softened, and the pianist can practice quietly.

It would be a mistake not to mention the important relevance of the soundboard to how a piano works. The soundboard is the heart and soul of the piano. It is responsible for converting the vibration of the strings into audible tones - amplifying the sounds. Grand pianos have a much longer body precisely because of the bigger soundboard. And they, of course, are able to produce the sounds much louder than an upright.

The next time your piano is opened up for tuning, look closer inside.

It's funny how I use social media because I don't use it to promote my restaurants that much. I use it for social issues and I think that's what it's for. I do a few things - I mess around with music a lot because that's a passion of mine. If something strikes me and I want to share it, I do.