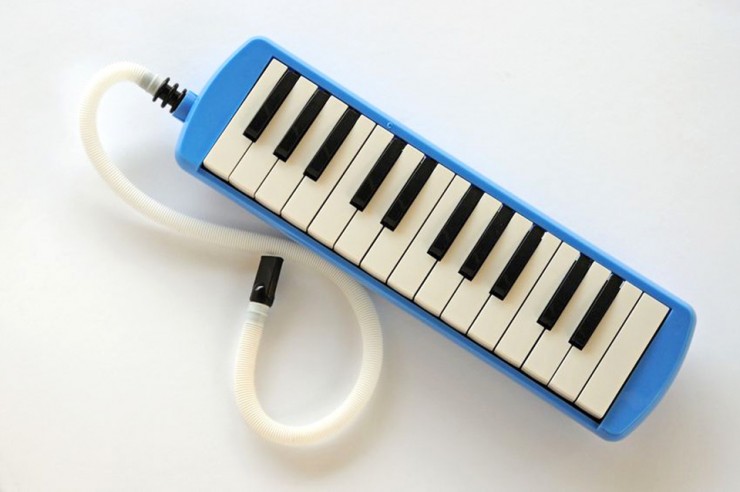 Hybrids are a fascinating mash up of disparate things, a synthesis of pre-existing materials to create something wholly original and novel. In the animal world a beast known as the liger exists, a hulking feline predator produced from the union of a lion and a tiger. The majestic ligers are an incredibly rare sight as they lack the means to reproduce themselves. In the realm of artifice, the ingenuity of man can sometimes create a mechanical equivalent to a liger, an instrument that is more than the sum of its parts. Thus it is so for the pianica, a hybrid of the piano and the harmonica. The pianica is also known as the melodica, blow-organ, key harmonica, or the melodyhorn.

The pianica features a set of keys on a flat plane surface. When air passes through a tube connected to an open port on the side of the device and a key is depressed, a further passage is opened that lets the air course through a mechanism called a reed.

The keys of the pianica are commonly arranged and coloured like the ones found in a piano, but more limited in number as they can only cover two or three octaves. Pianicas are compact and are used quite extensively to teach music in Asian regions.

Currently, these instruments are categorised by the pitch of notes they can emit. Tenor pianicas, like their names suggest, produce a lower pitch. They can be carried with one hand, and operated by the other, or laid on a table and played with both hands like a piano while the mouth constantly blows air into the side cavity.

On the other hand, soprano and alto pianicas emit higher notes compared to their tenor counterparts. They too are built to be played by both hands. The above-mentioned varieties are the most popular, but there are also bass pianicas and the accordina, almost exclusively constructed of metal and features buttons ordered by colour instead of a conventional piano layout. There are even pianicas built mainly from wood which their manufacturers claim generate more robust tunes than their plastic counterparts.

Some consider pianicas to be superior to long-established woodwind instruments. While instruments such as the flute, saxophone or clarinet tax the performer because of the need for multiple fingers to cover certain holes to generate just one sound, pianicas allow the freedom of sounding one note with merely one finger, along with the liberty of pressing other keys with other fingers, like in playing a chord. Therefore, while woodwind instruments are monophonic (they can only produce one sound), pianicas are polyphonic (they can generate multiple sounds).

The invention of the pianica has been largely credited to the Hohner company in the 1950s. This company was set up by Matthias Hohner (1833-1902) in 1857 and today is most well-known for its range of quality accordions and harmonicas. Matthias Hohner started his working life crafting clocks, but later switched to manually making harmonicas with the help of his wife and an assistant. His fame as a harmonica craftsman grew and during his tenure on earth he formed the biggest harmonica workshop across the globe.

Pianicas are a favourite instrument of many music enthusiasts. In video-sharing platforms such as Youtube, one can find many talented performers strutting their stuff.

The Brothers Ong uses two pianicas to give an energetic rendition of Flight of the Bumblebee. In truth, the pianica makes it more convenient to control the notes in fast-paced songs such as this.

Jonathan Ong, one half of the brothers, also impresses with a personal performance of Chopin's Fantasise Impromptu. At the time of his performance, Jonathan has had 22 years of piano lessons and 6 years of flute training, and the speed of his fingers testify to his experience.

Do check out these other videos of delightful music produced by musical hybrids: Aljoscha Müller shows how smart placement of musical devices can result in efficient multi-tasking and a brand new hybrid, the "melogitar".

Masa Matsuda gives a masterful execution of LiberTango with the help of a Yamaha pianica. The pacing and precision of Masa's art makes the song indistinguishable from one programmed from a synthesizer!

Hell is full of musical amateurs.