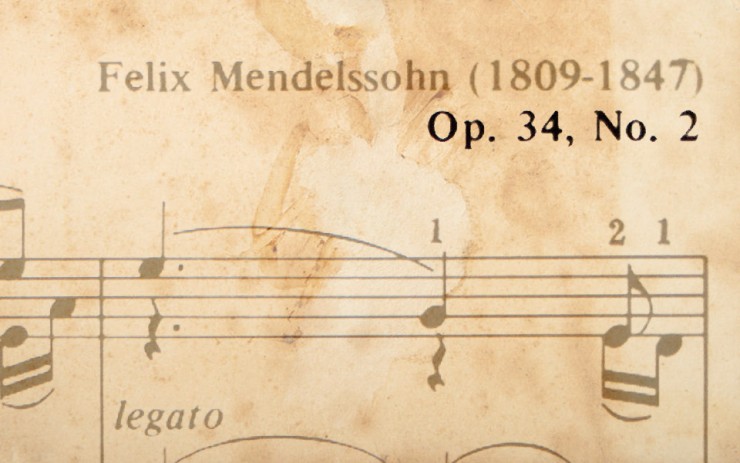 Like any important body of knowledge, music needs to be organised, archived and categorised for easy reference. While subjects in an encyclopaedia are organised in alphabetical order, works of music are arranged in numerical order. However, the process of numerical ordering has undergone several changes over the years, with certain imperfections and areas of complication smoothed out.

When the piano was first invented by Bartolomeo Cristofori, an unprecedented torrent of creativity and energy was unleashed upon the music world. The first few pianists wasted no time in burying themselves in music-making, writing new compositions for this novel instrument.

While these composers did title their works, there was no universally established code for recording musical pieces, so there was many times where it was done haphazardly. Added to the confusion was the adoption of opus numbers.

Opus means "work" in Latin and retains this meaning in English. Up to the culmination of the 18th century, opus numbers (abbreviated to op.) were only granted to musical works that had been published. Consecutive opus numbers would be given to the works of a composer as they were published. In theory, one could determine the chronological sequence in which a composer's works were published by looking at their opus numbers.

The problem is that opus numbers do not account for musical compositions that were not published, or the sequence in which they are composed. Even for works that were published in the eighteenth century, the same opus number might be given for thematically similar works of the same composer banded together in one big set. This meant that opus numbers were not given in the correct chronological order and were even duplicated when publishers issued more recent editions of a composer's earlier work.

Take German legend Ludwig van Beethoven for example. One of his most popular piano pieces is the "Moonlight Sonata", or what was recorded by him as Piano Sonata No. 14 in C# minor. It can be seen that Beethoven took steps to numerically order his musical works. However, opus number 27 was assigned to both Sonata No. 13 and Sonata No. 14.

Beethoven himself was inconsistent in numbering his works. As he got older, he actually published some of his earlier works with larger opus numbers. When he died in 1827, it was discovered that he had a few unnumbered and unpublished pieces, and they were termed the German acronym "WoO" (Werk ohne Opuszahl) meaning "Work without Opus number" in English. Such a convention was adopted for other composers with unpublished works as well.

Musicologists, in a bid to organise the works of their favourite composer in a more accurate manner, have come up with catalogue numbers. For example, the works of Johann Sebastian Bach have been ordered according to BWV-numbers. These numbers are the brainchild of cataloguer Wolfgang Schmieder. BWV is shorthand for Bach-Werke-Verzeichnis, which means "Bach Works Catalogue". Likewise, the compositions of Wolfgang Amadeus Mozart are discerned by K-numbers, based on Köchel-Verzeichnis nummer which means "Köchel number index", in honour of musicologist Ludwig Ritter von Köchel. Sometimes more than one catalogue exists for the same composer. When this happens, the widely accepted practice is to treat one particular catalogue as the authoritative point of reference.

Abbreviations like BWV and K function as abbreviation codes in catalogues, and when combined with a sequence number, form listing numbers. Listing numbers allow researchers to conveniently find information chronicled by a musicologist in his or her catalogue. Indeed, when musical pieces are broadcasted or played in formal settings, their opus and listing number, and the name of the catalogue in which they are found, are usually stated.

Learning from the limitations of opus numbers, modern musicians could be encouraged to record their compositions in an organised and detailed manner. It would be helpful if they differentiated between works to be published and more private pieces, noted the dates of completion, and recorded any revisions and stylistics notes. Such careful documentation would ensure an exact database left for posterity.

Music is there to enrich your life and make you aware of things in a slightly different way.