What Is MOD Music? | ThePiano.SG
Skip to main content 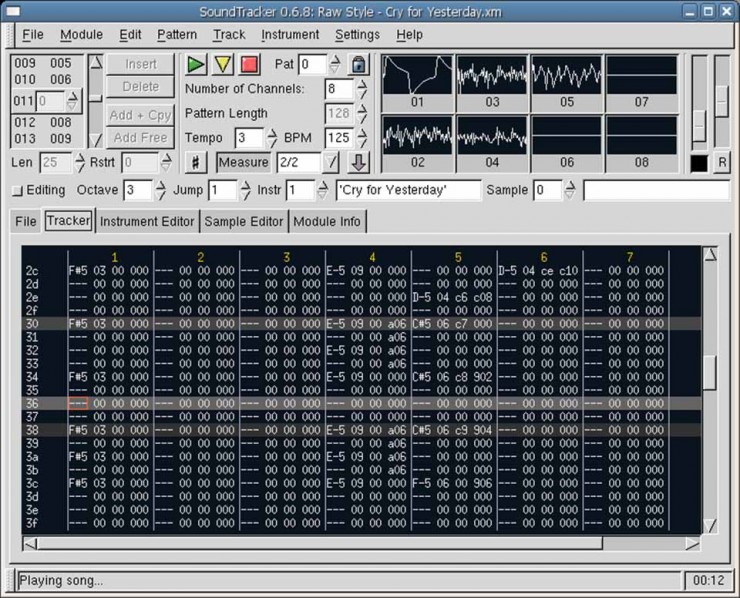 Those of us who grew up in the era when personal computers were starting to become a part of daily life might remember tinkering with the family computer after school. Back in the 1980s and 1990s, when Sony Walkman was the in-thing and technology was just creeping into the living room, spending hours glued to a 14”, boxy cathode ray tube (CRT) monitor in the corner of the house offered solace from the rigours of school life. For many of us, the PC was the start of the journey of our interaction with technology, way before the Internet and fibre broadband became commonplace.

Some of us might remember playing computer games off 5.25-inch floppy disks, while the rest of us might recall dialing in to bulletin board systems (BBS) with 2,400bps modems and chatting with fellow users (known as BBSers). Still, the more musically-inclined among us might relish with melancholy the days when we listened to MOD files with tracker software and wondered why the music composers were more talented than we were.

MOD files, or module files, are essentially music files that can be transferred between computers and shared with friends. Unknown to some, the humble MOD files of days past spawned a whole movement around the world that got people interested in digital music and created a demoscene subculture.

MOD music created a generation of composers, known as tracker musicians, some of whom gained an international following. MOD music became so widely-accepted, it even made its way into computer games.

A group of composers that rose in prominence was the Finnish group Future Crew, which was responsible for the creation of many demonstration videos between 1987 and 1994. Notable videos made then included Unreal (released at Assembly 1992), Panic (The Party 1992) and Second Reality (Assembly 1993, considered to be one of the most influential demos ever made).

Assembly and The Party were regularly-held gatherings of demoscene programmers and music artists.

Future Crew, now defunct, used to comprise many well-known tracker musicians, however, two of the more popular ones were Purple Motion and Skaven. Tracker musicians often used pseudonyms, just like many actors today use stage names.

Purple Motion, who was Jonne Valtonen in real life, was the lead composer in Future Crew. He was widely credited for his contributions to tracker music.

Skaven, known in real life as Peter Hajba, was another prominent music artist from Future Crew. During his time, he won many awards for his music, despite having received no formal music training.

One characteristic of MOD files that led to their popularity in the 1990s was their relatively small size. While uncompressed Waveform Audio Files (WAV files) are associated with large file sizes, MOD files are much smaller and portable. These digitally-written music files were originally written for the Commodore Amiga computer systems, which successfully penetrated many households during its time.

Unlike the other commonly-known format known as Musical Instrument Digital Interface (MIDI), a coding sequence (digital musical sheet) that depends on the wave-table samples in hardware-based sound cards to render the sounds of the corresponding musical instruments, resulting in differences across different environments, MOD files comprise not only the digital musical sheets but also digitally-recorded musical samples that reproduce sounds correctly.

The musical digital sheet is a set of instructions that covers every aspect of a note, from the pitch and duration to the volume and panning. Even effects like echos and fades are encoded. Each sheet consists of a series of tracks or channels, which when played, produce multiple sounds at the same instance, much like an orchestra produces an array of sounds when performing.

Packing the actual instrument samples into each MOD file to reproduce the sounds according to the accompanying instructions allows the composers to ensure the consistency and quality of their work. This causes the module files to play in largely the same manner across different machines, which include not just personal computers, but also mobile devices like PDAs and mobile phones. The pairing of individual modules – coding sequence and samples - is what gives the file format its name: Module files.

Music composers in the old days used a range of software, known as trackers, to code the music files. The name “tracker” originated from the Ultimate SoundTracker, a programme written for the Commodore Amiga and released in 1987. It was written by Karsten Obarski, who worked for game developer EAS Technik.

Examples of popular trackers were Impulse Tracker, ScreamTracker, FastTracker and ModPlug Tracker. Although these trackers were originally developed for the Amiga, later versions allowed these programmes to be made available for the DOS and Windows environments, too.

Along with these music-composing programmes that also allowed MOD fans to listen to the compositions, some playback-only programmes – still available today – incorporated compatibility for the MOD format to allow non-composers to easily enjoy these pieces as well. Examples of these music players include VLC Player, WinAmp and XMPlay.

MOD files became so prevalent in the late 1980s and early 1990s that they found their way into computer games. MIDI files were initially used, however, this meant working with the default instruments available in the General MIDI Instrument Set, which severely limited the types of sounds that could be played.

As technology advanced and memory requirements were reduced, game developers no longer had to rely solely on the restrictive MIDI format. They could now create customised sound samples that provided richer, more realistic music for their games. The MOD format would be the perfect platform to bring these new sounds into the games. That was when MOD files started to appear in game music. Both MOD and MIDI files are still used to produce game music today.

Even though three decades have passed since MOD files were created and new, more powerful, music formats like WMA and MP3 have largely replaced MOD, many of the beloved MOD files from the bygone era are still available. They have been immortalised in various web archives on the Internet, one of the most comprehensive of which is MOD Archive.

Without music to decorate it, time is just a bunch of boring production deadlines or dates by which bills must be paid.