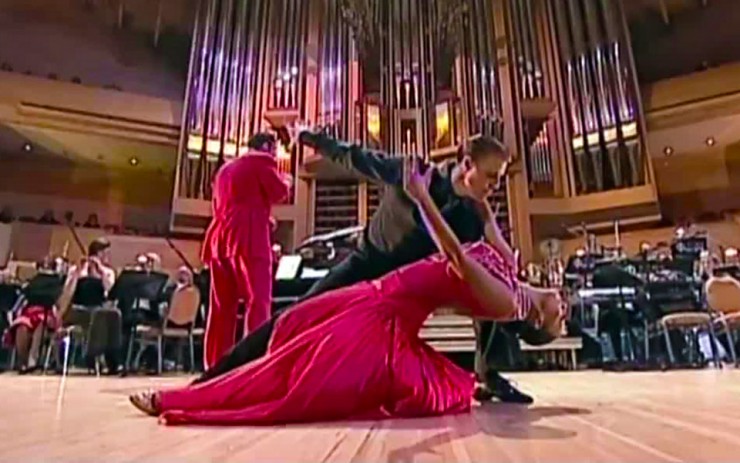 On 16 June 2016, the popular piano duo, Greg Anderson and Elizabeth Joy Roe, had their third performance in Singapore. One of the highlights of their astounding performance that night was Libertango. The duo’s rendition proves to raise the bar for any other performers’ attempts to showcase this infamous piece and is highly commended by many.

Tango is one of the most seductive and sensual partner dances and has its origins dating back to the 1880s along River Plate, at the border between Argentina and Uruguay. During the dance, the dancers use suggestive moves and passionate eye contact to interact with one other in an intimate manner that one would believe that the dancers are in love. There are various styles of tango, with varied tempo and dance movements.

Tango composer, Astor Piazzolla, composed Libertango, which was published and recorded in 1974. Libertango is a portmanteau merging the Spanish word, Libertad and Tango that symbolized Piazzolla’s break from Classic Tango music to Nuevo Tango music. He transformed Tango music by introducing new instruments like the saxophone and electric guitar, as well as bringing in alternate harmonic and melodic arrangements to the conventional Tango music. The piece has since been adapted and rearranged regularly.

Astor Piazzolla (11 March 1921 – 4 July 1992), whose parents had migrated from Italy, was born in Argentina. In his early years, the family moved to New York, where he was exposed to tango, jazz and classical music. His destiny to make history with Tango music was probably sealed when his father got him a bandoneon from a pawnshop in 1929.

Thereafter, Piazzolla had music lessons and started to play with tango orchestras when he returned to Argentina with his family in his teens. By the time he was 17, Piazzolla was already a bandoneonist and arranger for Anibal Troilo, who was part of the best tango orchestras at that time.

Piazzolla’s start as a composer started in 1943 when he composed a classical piece after studying under a classical pianist, Raúl Spivak. By the following year, differing musical ideologies drove Piazzolla away from Troilo’s orchestra.

Piazzolla formed his own orchestra that gave him the opportunities to explore his thoughts on tango music. His first proper tango composition appeared in 1946. Always on the hunt for his own musical style, Piazzolla was committed to studying music and was particularly fond of jazz.

He would have given up tango music in 1954, had it not been for a chance to study under the prominent French composition teacher Nadia Boulanger in Paris, who saw Piazzolla’s gift in Tango music. After years of hard work and perseverance, Piazzolla then became one of the “world’s foremost composer of tango music” as described by American music critic, Stephen Holden in 1992.

Piazzolla is not only a brilliant role model for musicians; his spirit of being valiant, of being something or someone different is what one can emulate. It is only through the hunger for change and the courage to be atypical that we will see progression; not unlike Anderson and Roe’s version of Piazzolla’s Libertango that liberates the customary vision of how four-hand playing should be.

Music is the voice that tells us that the human race is greater than it knows.