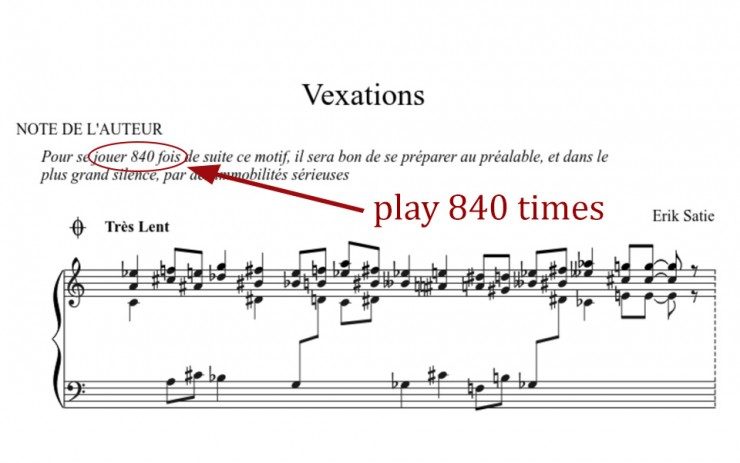 The longest known piano piece is Erik Satie’s Vexations, if we we overlook the requirement for a piece of music to be “non-repetitive”. Though undated, scholars predict the piece to be dated to around 1893-1894.

This piece was not published in Satie’s lifetime, and is not known to have ever been performed or mentioned by the French composer. It was first printed in 1949 in facsimile form, by John Cage in Contrepoints No. 6.

The piece was found with the inscription: “In order to play the theme 840 times in succession, it would be advisable to prepare oneself beforehand, and in the deepest silence, by serious immobilities” (Pour se jouer 840 fois de suite ce motif, il sera bon de se préparer au préalable, et dans le plus grand silence, par des immobilités sérieuses).

This text was interpreted as instruction that the piece should be played 840 times, although it was unknown if this was Satie’s intention. To make things more complicated, the theme of the piece and its chords were written by Satie in an unconventional style, with eccentric enharmonic notation. 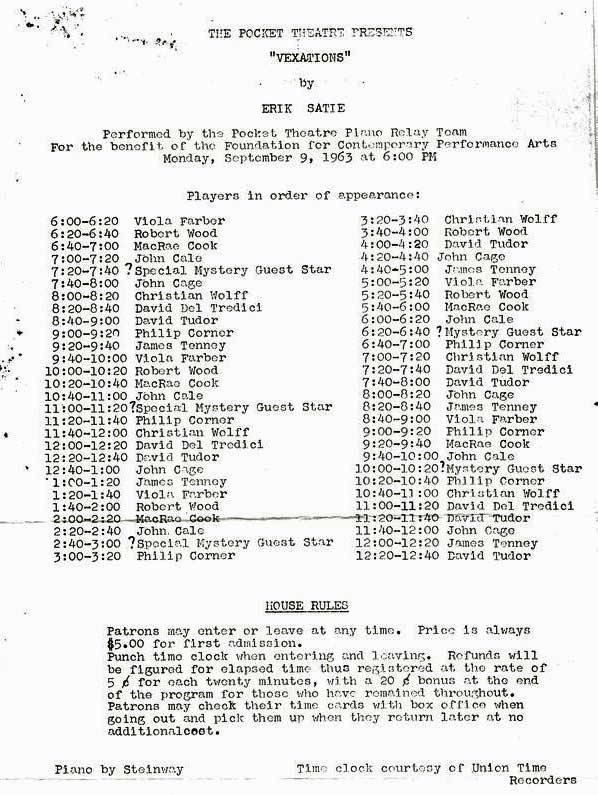 The first time the piece was performed in a marathon performance was on September 9, 1963, produced by John Cage and Lewis Lloyd. The performance was held at the Pocket Theatre in Manhattan, with the Pocket Theatre Piano Relay team, put together by Cage, on stage. The pianists who participated included John Cage himself, David Tudor, Christian Wolff, Philip Corner, Viola Farber, Robert Wood, MacRae Cook, John Cale, David Del Tredici, James Tenney, Howard Klein and Joshua Rifkin, along with two reserves.

Cage underestimated the concert’s duration, which went on for as long as 18 hours. Actor Karl Schenzer was present throughout, and the concert received coverage by the New York Times.

The 1971 Guinness Book of Records stated that critics from The New York Times fell asleep at 4am, and only six people remained in the audience. One of the enduring overnighters exclaimed, “Encore!” when the concert ended.

The following integral performance was in October 1967, at the Arts Lab, located in Drury Lane in London. Performed by Richard Toop, the performance lasted about 24 hours, and was first time anyone had performed the piece solo.

Vexations got another chance to be heard when the alt-classical concert series ChamberLab hosted a marathon performance in December 2017. This event was held at the Hotel Congress in Tucson, Arizona, and it was used as a means to raise funds for the American Civil Liberties Union. The performance, which attracted 34 musicians, raised over $16,731 in pledges and donations.

MakerBot industries also programmed one of their robots to perform the piece, which was performed in public at the 2010 New York City Maker Faire.

These are but some of the known performances of Vexations.

That's one wonderful thing about country music - it shifts, ebbs, and flows stylistically, unlike pop music.