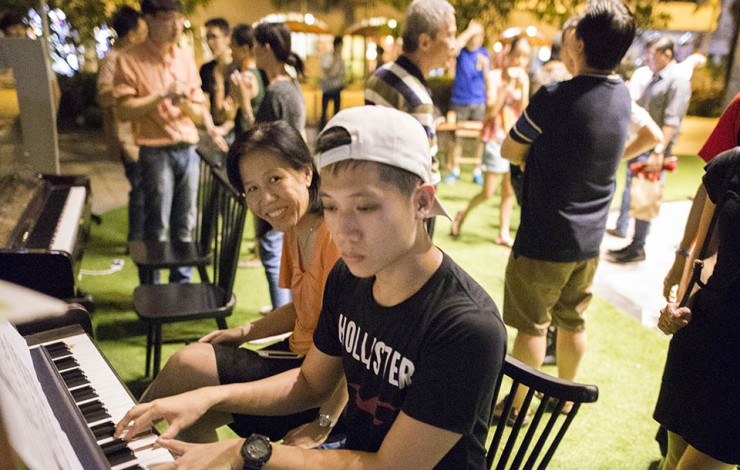 After taking some time off for the holidays, The Pianovers Meetup is back! The night began as how Pianovers Meetups would begin, with an intimate dinner between a couple of Piano lovers and delicious local food.

Gathering at 5pm, Yong Meng, JC, Shirley, Kirthana and her friend Jeremiah headed over to Maxwell Food Centre for what proved to be one of the most interesting Pianover Meetup dinners yet. JC, having worked as a chef before, treated the gang to an in-depth and insightful analysis of the famous Michelin-Award winning Tian Tian Hainanese Chicken Rice. He poked the rice, separated the rice, and examined the chicken meat, all for the sake of helping understand gastronomy better.

Back at The URA Centre, we were greeted with the group, many of which consisted of regulars. Regulars like Isao, Corrine, Audrey, May Ling, Albert, Siew Tin, Chris, Wen Jun, Jun Hao, Weilie, Tabitha, Jimmy, Gee Yong, Cynthia and Yu Tong (mother and daughter), Raymond, Gregory, Anna, Tracy, Yu Han; thank you all for coming to the first Pianovers Meetup of 2017!

Another thank you extends to Isao, for supporting the Meetup, showing up in ThePiano.SG polo shirt and always bringing snacks for the group to share. Yu Han brought back his brother Yu Mu, who was at Pianover Meetup #12 held at Zensen’s place. Apart from regulars, the new year brought along some new friends to the Meetup (JC, Shirley, Kirthana, who brought her friend Jeremiah, Jolyn, and Sara, by Jun Hao, Misa, by Gregory.)

The Registered Players segment began with Isao, who played us a rendition of Sleepy Shores, by Johnny Pearson of the Johnny Pearson Orchestra, from the theme from the television series, Owen, M.D. The piece hit top 8 in the UK charts during the early 1970s. He also played a piece by Paul Mauriat, the French orchestra leader and conductor of Le Grand Orchestre de Paul Mauriat, Toccata. His other popular songs include hits such as “El Bimbo” and Penelope”. Paul Mariat was also known for his genre of “easy listening” music, as well as the cover of André Popp's "Love is Blue”, which was the Number 1 track for five consecutive weeks in 1968.

Siew Tin delighted us with her choice of Mandarin classics yet again.  She performed a piece first performed by Teresa Teng, 星夜的离别, by 远藤实.

Corrine played two pieces: May The Force Be With You, followed by Princess Leia's Theme. To spice things up and to build on the Star Wars theme, we introduced an article previously published on ThePiano.SG - How musicians celebrate Star Wars music and the video embedded within. We paid special attention to the segment that featured the transformation of the grand piano into the Millennium Falcon and R2-D2.

Albert, too, played Chinese classics: one by 王福齡 titled "甜言蜜語" which was compiled in Sally Yeh’s 1987 album, known by the same name, and another by 刘家昌 titled "雲河", used in the movie 雲河.

Regular Pianover Chris Khoo played a well wishing Over The Rainbow, by Harold Arlen, for the year ahead. Roy (newcomer) played 她说 by JJ Lin.

Weilie and Tabitha played a piano duo of the piece "Danse Macabre", by Camille Saint-Saëns. Not to be confused with a duet, the two Pianovers performed the piece separately on the two donated pianos. And even though the sustain pedals on the Re:minisce piano was broken, affecting Tabitha’s playing, the pair still managed to bring out a beautiful rendition of the piece.

Danse Macabre was written in the 19th century by French composer Camille Saint-Saens. It is a tone poem that plays out the Haloween scene in which “Death” appears and has the dead dance while he plays his violin. “Danse Macabre” was originally scored for an obbligato violin and performed by a full orchestra, complete with a percussion section (one piccolo, two flutes, two oboes, two clarinets in B♭, two bassoons; four horns in G and D, two trumpets in D, three trombones, one tuba; a percussion section of timpani, xylophone, bass drum, cymbals and triangle; one harp and strings).

When it was first performed, it was highly criticized due to “widespread consternation: the commentator Roger Nichols mentioned adverse reaction to "the deformed Dies irae plainsong", the "horrible screeching from solo violin", the use of a xylophone and "the hypnotic repetitions", in which Nichols hears a pre-echo of Ravel's Boléro.” However, after its premiere, the piece was transcribed many times by several composers – an organ arrangement by Edwin Lemare, as well as piano arrangements by Franz Liszt, Vladimir Horowitz and the most well-known of all the the transcriptions, a four-hand arrangement by Ernest Guiraud; which was the version played by Weilie and Tabitha.

Following the stunning piano duo was Jun Hao, who played 菊花台 by Jay Chou. He had brought two friends along, Jolyn, and Sara. 菊花台 was used during the ending sequence for the popular period movie “Curse of the Golden Flower”, that had a star-studded cast that included Chow Yun Fatt, Gong Li, and Jay Chou himself.

During The Open Segment, Jun Hao, Isao, Gee Yong and Gregory had an audience watching, gathered around them when they were jamming. Apart from that, they were other small crowds gathered around the area, chatting, catching up with each other, getting to know the newer Pianovers. Everyone present that night was very supportive of one another. There was always a crowd present for anyone playing the piano at the time, showing their support and appreciation for the craft. Siew Tin, Gee Yong, Gregory, and Yong Meng were the last to leave, staying to chat and jam till 11pm, even after the lights at The URA Centre was switched off.

We hope to see more of you at the next Pianovers Meetup!

My heart, which is so full to overflowing, has often been solaced and refreshed by music when sick and weary.