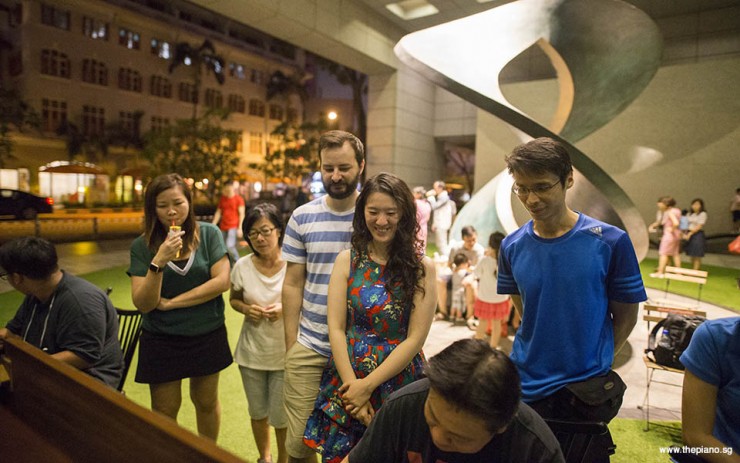 Sunday had come around once again, and with it, the much-anticipated Pianovers Meetup. The weekly meetings, organised by ThePiano.SG, held at the URA Centre have been attracting piano lovers, young and old. It is heartening to see that people with music in their hearts convering at this meeting to enjoy music, to share their passion for music, and to bond with fellow Pianovers.

Since they started in July 2016, the Pianovers Meetups have seen not only people who actually play the piano, but also those who wish to inspire their children to take up this wonderful performing art. Indeed, we have been witnessing people bringing their sons and daughters along for a wholesome, post-dinner piano sessions!

On 30 April 2017, Pianovers arrived at the URA Centre early. As usual, that evening saw a mix of regulars and newcomers. Among the familiar faces were Isao, Siew Tin, Jerome, Gee Yong and Theng Beng. Also present were Mitch and Vanessa, who have unfailingly joined our weekly meetups. It was heartening to see some young players as well! Pianovers warmly welcomed Jun Theng, Heok Hwa and Cheng Leng, who bravely took to the pianos to perform their pieces.

Starting the Mini-Recital was Isao who performed a very enchanting piece Memories Of A Sunny Park by Yuriko Nakamura, compiled in her 1987 album "Wind and Reflections", but not before sharing with the audience about this special composition. Isao typically loves to share his musical knowledge and insights with the Pianovers, and this week was no different.

Jinny entertained us with Let It Go which was written by husband-and-wife songwriting team Kristen Anderson-Lopez, Robert Lopez. Used in the Disney's 2013 animated feature film "Frozen", it went on to win the Academy Award for Best Original Song in 2014, as well as the Grammy Award for Best Song Written for Visual Media in 2015.

Jun Theng, Jinny's daughter, continued the "Frozen" theme with Do You Want to Build a Snowman?. Jun Theng’s performance of the one-handed piano cover had the audience wowed and earned a hearty applause. Jinny’s son, Heok Hwa, played Minuet in G that has been mistakenly thought to be an original composition by J.S. Bach, but now discovered to be the work of Christian Petzold.

Although Cheng Leng is much younger than the rest of the Pianovers, she now has six pieces under her belt with her latest hits London Bridge Is Falling Down and Twinkle, Twinkle Little Star. Her mother, Jaime, brought us back to the 1960s when she played 不了情 by 王福龄, from the black-and-white movie of the same title.

Chong Kee and Corrine, joined hands this time to deliver a four-hands Braziliera from Scaramouche by Darius Milhaud, and received a huge applause from everyone. Four-hands and duet works are still explored much less than solo works, so it is very encouraging to see Pianovers taking the lead.

Theng Beng next performed Waltz in C-sharp minor, Op. 64, No. 2 which was composed by Chopin in 1847 and dedicated to his student, Charlotte de Rothschild.

From another Disney film "The Little Mermaid" came the track, Under The Sea, written by Alan Menken. It was performed this evening by Vanessa, another Meetup regular. It is worth noting that this lively song is played throughout all the Walt Disney parks and resorts, as well as the Disney Cruise Line. It is certainly a popular piece that resonates with people of all ages!

May Ling played For Once In My Life by Orlando Murden and Ron Miller. Many versions of this piece exist today, but undisputedly, the most successful and familiar version is the 1967 uptempo arrangement by Stevie Wonder.

We were thrilled to see Wing Wa and his family back again. His daughter, Wan Yi, excitedly showed us Let’s Go On an Expedition, while Wing Wa himself performed Lavender's Blue from the Disney movie "Cinderella". The song backgrounds two important scenes in the movie: one when it is being sung to young Cinderella by her mother, and the other when it is sung by Cinderella herself when her stepmother locks her in her room.

Newcomer Ren Adachi, who is here in Singapore to study, mesmerised us with more of Chopin's works for the evening - Fantaisie-Impromptu in C-sharp minor, Op. posth. 66, Étude Op. 10, No. 12 in C minor (Revolutionary Étude), and Ballade No. 1 in G minor, Op. 23; and concluded his performance with Hana-Bi by Joe Hisaishi which was used in the 1997 Japanese crime drama film of the same title.

Siew Tin, known for her signature Chinese classics, played 枫叶情 by 骆明道, and ended the Mini-Recital.

Having concluded the Mini-Recital, Pianovers then proceeded with the Open Segment. This was the fun part of the evening, as Pianovers jammed on the two pianos with no preset order. This was also the moment where Pianovers openly shared their knowledge and tips with one another, like a community without borders.

Zhi Yuan, Ren and Jerome were seen sharing a hearty moment of laughter, while Corrine and Zafri had fun playing their piece. Later in the session, Jerome, Zhi Yuan and Theng Beng exchanged tips about piano compositions, a visible testimony of the close-knit, open-hearted nature of Pianovers. Jin Li and Gee Yong even shared a photograph for posterity!

Soon, it was time to bid goodbye to one another. Another wonderful evening had come to an end, however, Pianovers had strengthened their friendships with fellow music lovers! Without a doubt, newcomers had felt welcome at this community, and children had had a fulfilling and inspirational evening. We at ThePiano.SG have no doubt that all of those present would look forward to the next Pianovers Meetup!

A symphony is no joke.