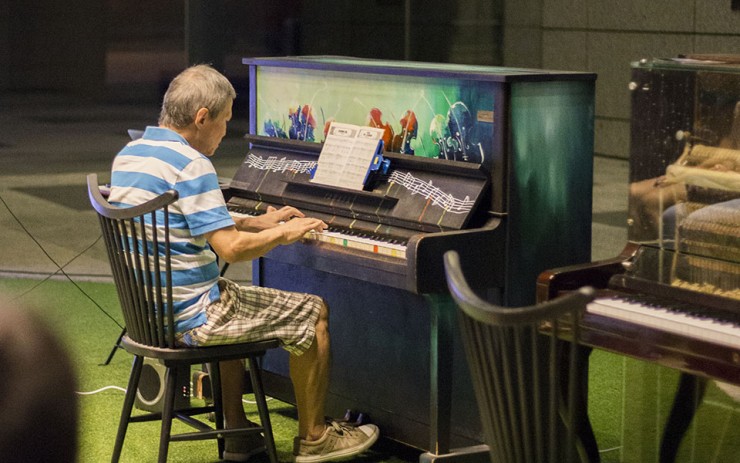 Pianovers Meetups, a weekly meeting of passionate piano lovers, was now into its 42nd session. Every Sunday, without fail, a group of Pianovers would converge at The URA Centre at Maxwell Road.  From a small, humble meeting that started a year ago, the meeting hs grown to what it is today. People have come, enjoyed the benefits of the meetups, and gone back to inform their family and friends, who then join them at the following sessions. This weekend event is organised by ThePiano.SG and is meant to create an environment for pianists to perform and showcase their skills. We are really glad that we have been able to bring together not just aspiring pianists, but also non-pianists who enjoy piano music, to a common place, to network and learn from one another, in a supportive, cohesive environment!

Typically, the event gets off to a culinary start before the programme proper begins. Although the Meetup starts at 6:30pm, early birds come at 5:30pm and bond with fellow members over a good dinner. This evening, Pat, Jonas, Wayne and Zafri joined ThePiano.SG Founder Sng Yong Meng for dinner at the Maxwell Road Food Centre. Also in the dinner group was newcomer Sen. Welcome, Sen, to Pianovers Meetup! An hour and several filled tummies later, the group returned to The URA Centre, where they found more Pianovers already waiting. Albert, Siew Tin and Ben Tang were there, as were Vanessa and Mitch, Gwen and her mother, Novita, and Ploy. Vanessa and Ploy were to perform tonight.

The evening’s programme kicked off with a Mini-Recital. In this session, Pianovers perform to all present in pre-registered slots. This evening’s Mini-Recital was started by Gwen, who was beautifully dressed like a Cinderella today, for a very special purpose. She performed Lavender's Blue, used in the Disney's movie "Cinderella". The song backgrounds two important scenes in the movie; first when it was being sung to young Cinderella by her mother, and second was sung by Cinderella herself when her stepmother locks her in her room.

She continued with Heart and Soul composed by Hoagy Carmichael. Heart and Soul is an evergreen piece dating back to 1938 that remains popular till today and is often played with four hands. In the 2006 movie "Superman Returns", five-year old Jason plays this piece with Brutus, henchman of villain Lex Luthor, illustrating how music does not distinguish between good and evil and transcends geographical, racial and cultural boundaries.

Wayne returned to play Deux Arabesques L. 66 No. 1 Andantino con moto by Debussy when he was still in his twenties. The suite of two Arabesques is one of the very early impressionistic pieces of music, following the French visual art form; and is also formerly part of the ABRSM Grade 8 Syllabus.

Siew Tin delivered two Chinese numbers 秋诗篇篇 by 刘家昌 and 偏偏喜欢你 by 陈百强. The former was written after its 刘家昌's marriage, and, in a reflection that the composer loved this piece a lot, 刘家昌 had mused that would be his last song. The most popular cover is by 费玉清, a popular Taiwanese singer-songwriter and the younger brother of television personality Chang Fei.

In a very apt move, given the upcoming National Day, Vanessa played Home by Dick Lee. This piece was written in 1998 with both English and Chinese versions, and performed by Kit Chan. Until today, this song remains very popular among Singaporeans. Most Singaporeans would agree that "Home" is the best NDP song!

Next, Desiree, Mentari's mother, entertained us with "French Suite No. 5 Allemande" by J.S. Bach. The French Suites, BWV 812–817, are six suites which Bach wrote for the clavier. The naming of French Suites is due to the belief that they are written in the French manner. However, this is inaccurate, because like Bach's other suites, the French Suites actually follow a largely Italian convention. As Desiree performed the piece, her husband Zalfany lovingly recorded his wife at the keyboard on video. It was heartwarming to see Zalfany being such a loving husband and supporting his wife as she pursues her passion!

Known to us for playing largely Chinese classics, Albert today continued to dazzle us with "纯纯的爱" by 刘家昌, and "你是春日风" by 姚敏. The former is used in the 1974 movie of the same title and starred the young 林青霞 (Lin Ching-hsia).

Nicholas introduced to us an original composition by his friend, Ari Fisher, titled March of the Bananas. Nicholas played with such gusto and occasionally banged the lower registers of the keyboard with his left arm!

In his sharing before he played "Round O" by Henry Purcell, Nicholas noted that Baroque pieces are less explored by today's piano students and should be engaged further to develop independence of the pianist's both hands. Nicholas’ words precisely echoed Yong Meng's sentiments after Desiree's performance of Bach's piece earlier.

Next, Chris brought about an emotional Send In The Clowns by Stephen Sondheim for the 1973 musical "A Little Night Music".  This piece reflects the emotions and feelings of Desirée, a character from Act Two, when she tried to rescue her lover Fredrik, a lawyer, from a marriage with a much younger woman but was rejected, ostensibly due to his commitment to his legally-married wife.

Perhaps this evening was a starry one, and May Ling was inspired to play Quiet Nights of Quiet Stars by Antonio Carlos Jobim, and Vincent (Starry, Starry Night) by Don McLean. "Vincent" is written as a tribute to Vincent van Gogh on the 100th anniversary of midpoint of Vincent's life.

Yeo Ming concluded the Mini-Recital with "Gake no Ue no Ponyo" by Joe Hisaishi, used in the 2008 Studio Ghibli film "Ponyo", which centers on a goldfish named Ponyo who befriends a five-year-old human boy, Sōsuke, and wants to become a human girl.

Following the conclusion of the Mini-Recital, the evening moved into the Open Segment. Every week, in this session, there is no pre-set order and all Pianovers can play freely and interact. It is not uncommon to see Pianovers openly sharing their knowledge with one another! This evening, as expected, small groups formed and Pianovers actively bonded and exchanged tips. As Albert, Siew Tin and Desiree chatted, Jonas and Zafri tried their hands at the keyboard. A group photograph was taken and the group retired for the night, but only long after the lights at The URA Centre had been turned off!

Here, we would like to take the opportunity to announce an important event to all our readers. On 20 August 2017, ThePiano.SG will conduct its very first Pianovers Recital. This event, which allows Pianovers to actually perform on a stage in a true recital environment, is planned to celebrate the First Anniversary of Pianovers Meetup. The Performers Tickets were sold out in less than 24 hours, however, Guest Tickets are still available. Hurry and register today! See all of you on 20 August 2017!

At spotify, we really want you to democratically win as a musician. We want you to win because your music is the best music.