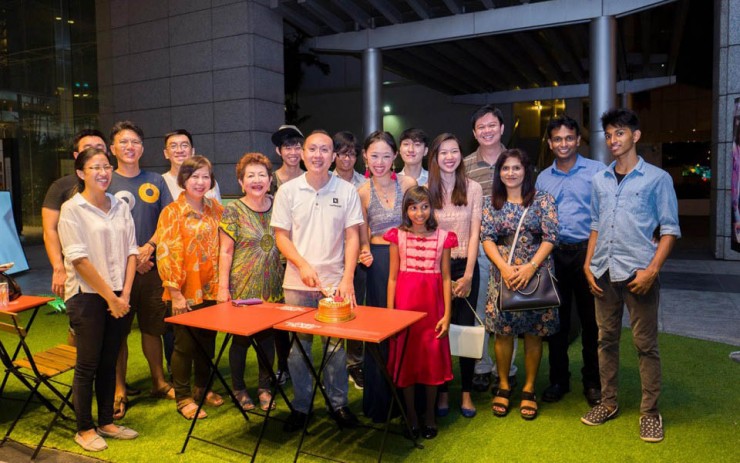 The 3rd Pianovers Meetup last Sunday was a particularly special one for all of us as it was also the 2nd anniversary celebration of the launch of ThePiano.SG on 08 Aug 2014!

Special preparations were made by Sng Yong Meng, Founder/Director and organiser of the Pianovers Meetup that included a custom-made, delectable gold-covered cake decorated with dazzling gold ribbon pipings around the edges (edible gold, of course!) and topped with the now-recognisable ThePiano.SG logo.

Coincidentally, a television crew who were initially there to conduct an interview with the founders of Play it Forward – contributors of the two pianos at The URA - joined in the jamboree and stayed on to film the meetup, much to many of the Pianovers’ excitement.

As the night would dictate, the 3rd Pianovers Meetup began without delay at 5pm, with plenty of new faces to add. Because of the Channel 8 crew and filming that was taking place at The URA Centre, part of the group just couldn't resist skipping dinner and staying on to observe the goings-on of a television production.

Customarily, the remaining headed over to Maxwell Food centre for dinner, only to be rejoined by the group after filming had concluded. Spirits were high as everyone couldn’t wait for the newly-introduced segment, “registered players play for us” to start.

Egged on by the mood of celebration as well as the film crew present, that Sunday night was one of the best and most event-filled get together of pianists and music lovers ThePiano.SG has seen yet.

It was easy to see that every performer displayed their appreciation for the art of piano playing, showcasing the best of their abilities.

Among them was a gifted father-daughter piano team, Peter Prem and Jeslyn Peter, who performed a beautiful rendition of Tiger Rag, originally recorded and copyrighted by Original Dixieland Jass Band, and later covered by many others, including Art Tatum.

Other familiar tunes were brought to life by the Pianovers, such as "Climb Every Mountain", from the musical The Sound of Music, played by Chris Khoo to honour the nation’s Gold medal achievement in the recent Rio Olympic games.

Another memorable scene of the night involved ThePiano.SG photographer and former Australian Ken Tay, whose heart was touched when a nostalgic piece – "Waltzing Matilda” one of Australia's best known bush ballads was played by Madam Lily.

The night was brought to a close with a group photo and ceremonious cake cutting by Yong Meng, reflecting on the highlights of the social initiative so far and goals for future ones; to continue to build a strong and supportive piano community, encourage friendships with other musicians, as well as to provide a stage for budding young pianists to showcase their talents and be rewarded for their achievements.

Here’s to the next Pianovers Meetup!

Tune in to the segment “Morning Express, 晨光第一线”, on 27 Sep 2016, 9am if you would like to catch, possibly, some of our Pianovers in action!

I see music as fluid architecture.