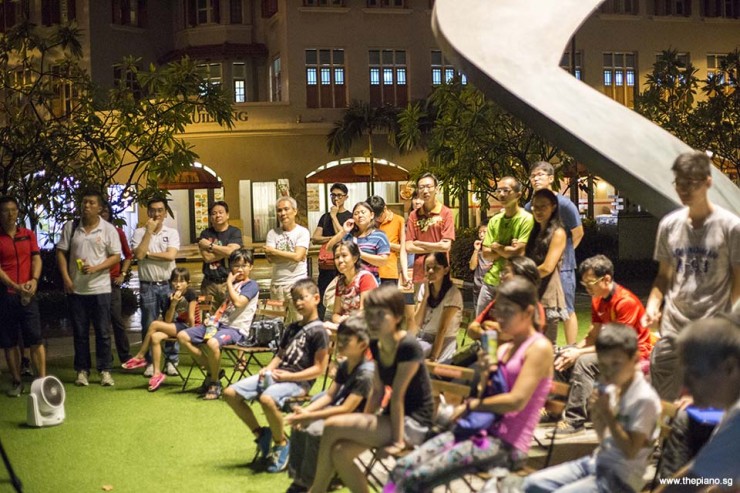 It’s the festive time of year and ThePiano.SG had a lot in store during the week’s Pianovers Meetup. From matching outfits to themed music, it was a night packed with joy, cheer, laughter and of course, wonderful music!

The night started young with Harith when Yong Meng caught him already jamming with a harmonica-playing passerby as he arrived to set up. Familiar faces like Timothy, Chris, May Ling, Audrey, Pui Shan, Gee Yong, Chee Beng and family, Benjamin, and Barrick, who brought along his parents, Ken and May, showed up shortly after. There were some new faces as well, such as Pat, who was one of the earliest to arrive and was able to join Yong Meng for a quick dinner at Maxwell, as well as other new Pianovers Tracy, Anna, Marcus, Roy, Jiaquan, as well as Matthew Tan together with his wife and kids, Pamela, Issac, Shaunna and Asher.

Starting the night off was Meetup regular Chris Khoo, whose music was accompanied by none other than mother nature herself, raining down around The URA Centre and the meetup. Being that it was his birthday too, the group took a break from The Registered Segment to gather around and sing him a birthday song, as well as share the delicious chocolate cake he had brought. Smiles were all around as the photographer snapped a couple of photos of the group in celebration of Chris’s birthday coinciding with the Christmas Pianovers Meetup. In spite of the pouring rain, there was still a significant turnout, with a good 30 Pianovers present.

The Registered Segment resumed soon after, with two versions of the evergreen Silent Night. One by Matthew Tan, a student of Yang Shu Wen and another one by Christopher Tay, whom we met during the Piano Jamming Party weekend at the Suntec convention Centre. When Matthew arrived with his entourage of wife and three children, all eyes were on the young ones as everyone present naturally assumed that one of them was Shu Wen’s student. To everyone’s surprise, the student turned out to be none other than Matthew himself.

Chris played Carols of the Bells, a popular Christmas carol created by Ukrainian musician Mykola Leontovych in 1914. The origin of this song is a Ukrainian folk chant titled “Shchedryk”. Although the lyrics have been copyrighted, the piece itself has been adapted and covered several times by many artists for a variety of productions.

Harith played “All The Things You Are”, by Jerome Kern. Having completed his exams, we are glad to see him back at the meetups!

Siew Tin did not disappoint with her choice of Mandarin song this week, with 绿岛小夜曲, the theme song in the HK movie “監獄風雲” although by a separate title, 友誼之光. The song depicts two lovers navigating the never-ending struggles of a relationship.

Seven-year-old Barrick played A Comme Amour, by Paul de Senneville and popularised by Richard Clayderman, inspiring us all with way-beyond-his-years talent.

May Ling played Have Yourself a Merry Little Christmas, by Hugh Martin. From a movie that set in 1904, “Meet me in St. Louis”, this classic piece made an appearance during a heartwarming scene between Judy Garland and Margaret O Brien, where an older sister sings to her little sister in an attempt to try and comfort her about their father leaving town.

Gee Yong played 千千闕歌, which is composed by 馬飼野康二, and originally sung by a Japanese called 近藤真彥, who titled it 夕焼けの歌.

Newcomer Anna played City of Stars from the recently released and highly-acclaimed romantic musical comedy-drama film La La Land. With a star-studded cast of Ryan Gosling, Emma Stone, John Legend, Rosemarie DeWitt and J.K. Simmons, the film revolves around a musician and an aspiring actress who found each other and romance in Los Angeles.

Albert Chan, a friend of Siew Tin who was also at the Piano Jamming Party, played "街灯下" by 刘家昌, a song from the 1980s.

William, who is also a newcomer, played Wishing You Were Somehow Here Again from “Phantom of the Opera”, the well-known and most financially-successful musical to date.

Wen Jun closed the segment with Tsunaida Te ni Kiss wo, from a Japanese anime. He also shared a heartfelt anecdote about how these pieces from Japanese anime motivated him to play the piano during a time when he felt the ABRSM exams were slowly diminishing his passion for the piano.

After the Registered Players Segment, we progressed into the Open Segment, where all the Pianovers are free to interact, jam and bond over music. This week, there were even kids with balloons running around, only adding to the festive mood that was already in the air. Audrey bought a Pianover Polo Shirt, but generously refused the $20 change. All in all, it was a pleasant night with cool weather sweeping The URA Centre.

Many Pianovers had a go with jamming on the two pianos. Even Harith, who was away from the meetups due to exams, had a small crowd gathered around him enjoying his jazz pieces. Though it was not actually Christmas day, the spirit of the season was certainly present, everyone had a wonderful time and only left at 10pm, even though the lights at the centre were switched off at 9pm.

Film is one of the three universal languages, the other two: mathematics and music.