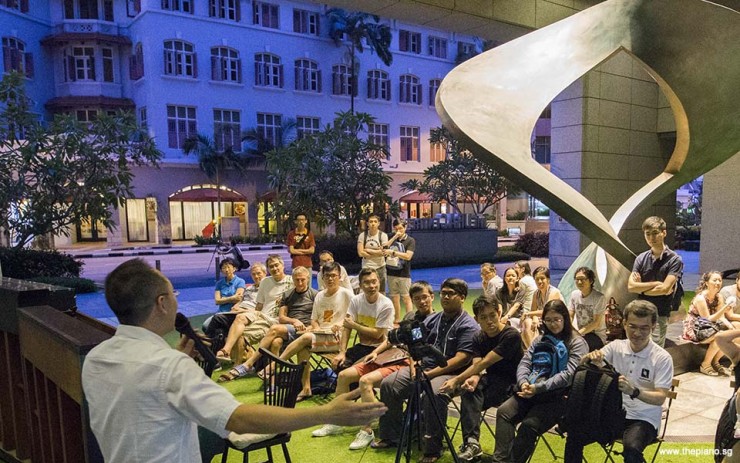 As Sunday evening arrived, passionate piano lovers – affectionately called Pianovers – gathered at the URA Centre to bond, to network and to share their love for music. This weekly event, known as Pianovers Meetups, have been attracting Pianovers, young and old, to come together.

As ThePiano.SG builds a community of piano lovers, it is heartening to see people coming back week after week to soak in not just the melodious sound of music, but also the warmth of the close-knit community. In addition, people who came alone have returned with their families and friends. Seeing the community truly coming to pursue their passion, we couldn’t be happier!

This evening, we welcomed a group of newcomers, namely Daniel, Yishan, Pong, and a family comprising Jenny Soh, her husband, and her daughter (who would perform later during the session). Also joining us was Kris, who hails from Poland. Kris travels extensively and has worked around the world for a number of years. He arrived in Singapore about two months ago and will be here for three years. The newcomers came early, and as is customary every week, we proceeded for dinner at the Maxwell Road Food Centre. Returning Pianovers Shin, Zafri and William also joined us.

After the group had received its sustenance, it was joined by other Pianovers regulars: MJ, Wenjun, Vanessa, Mitch, Benjamin, Gerald and Wenqing, Kirthana and Audrey. With the full team of Pianovers present, Pianovers Meetup #36 started its first segment, the Mini-Recital!

Chong Kee started the Mini-Recital with Étude Op. 10, No. 9, composed by Chopin in 1829 and popularly considered as a good left hand étude as it encourages the wrists and fingers to be more flexible. This is Chong Kee's third étude from Chopin, and fuels the guess that he might be walking through the entire étude collection!

Bride-to-be Vanessa tingled the white ivories with an up-beat Love Story by Taylor Swift, which sold over 8 million copies worldwide, and earned the reputation of the best-selling singles of all time.

Siew Tin proves to be an ardent lover of Chinese classics as she delivered 女儿圈 by 王福龄 enthusiastically.

This week, Isao decided to show us something more challenging than his past performances with Rhapsody in Blue by George Gershwin. Originally titled "American Rhapsody", it premiered on 12 February 1924 with the presence of many important and influential composers of the time such as Sergei Rachmaninoff and John Philip Sousa.

Next, Christopher Tay had us mesmerised with his hands dancing across the keyboard as he played a very entertaining 6 Wiener Tänze nach Motiven von Eduard Gärtner, No. 2. Vivo e sciolto by Ignaz Friedman.

Newcomer Kris, who recently arrived in Singapore, learned about the Pianovers Meetup, and was very happy to join us and readily agreed to perform Polonaise in A minor (Farewell to the Homeland) by Michał Kleofas Ogiński. Since Pianovers Meetup started, we have had many foreigners join us, including tourists who happened to walk by the URA Centre. We at ThePiano.SG are absolutely delighted that we have people from foreign lands joining us!

Albert played "外婆的澎湖湾" by 叶佳修 and "月兒弯弯照九州" by 梁乐音, and some of us were surprised to hear the familiar tune we enjoyed in our younger days, and couldn't put a title to. Indeed, Albert is a rare gem in our community who knows many Chinese classics that are now becoming a rarity, and we are glad he's sharing so much with us.

Jenny was here today with her family for the first time. Not only did she introduced us to Gershwin's three Preludes - Prelude No. 1, Allegro ben ritmato e deciso, Prelude No. 2, Andante con moto, and Prelude No. 3, Agitato; even her daughter I-Wen dazzled us with Mary Had a Little Lamb, Ode to Joy, Twinkle, Twinkle Little Star, and won loud applauses from everyone. We truly believe that music transcends boundaries and is something that should be enjoyed by young and old alike. Indeed, we are very happy that we have children as part of our community!

Various pieces from The Phantom of the Opera filled the Piano Park when William ran his fingers on the street piano. Andrew Lloyd Webber, who composed them for the musical's premiere in 1986, had brought the musical to becoming one of the most financially successful entertainment event, and also the longest running Broadway musical.

May Ling played Days of Wine and Roses by Henry Mancini, a popular song from the 1962 movie of the same title. What could be an interesting trivia is that the phrase "days of wine and roses" was penned by Ernest Dowson in his poem "Vitae Summa Brevis".

Ending the Mini-Recital was Zhi Yuan, who played another Chopin's Prelude after three last week. Prelude Op. 28, No. 15 comprises a repeating Ab throughout the entire piece, and sounds like raindrops, which explains why it is also called the "Raindrop" prelude.

With the Mini-Recital now over, Pianovers proceeded with the Open Segment. In this informal segment, Pianovers jam on the two available pianos. There is no preset sequence and Pianovers are free to watch the performers play, or sing along and even interact with the performers. At every session, too, we see Pianovers passionately sharing their knowledge of the piano with fellow attendees. Indeed, building a selfless community of Pianovers is precisely what ThePiano.SG aims to achieve. The Pianovers took a group photograph, as a way to remember the good time we had just had.

As the evening came to an end, it was time to pack up and leave. Even though all of us had a tinge of sadness in our hearts, we nonetheless felt that we had built an even stronger bond between us. All Pianovers present look forward to meeting up again. We at ThePiano.SG, too, hope that those of you who could not make it for this session will join us during Pianovers Meetup #37!

I have a very eclectic taste when it comes to music.