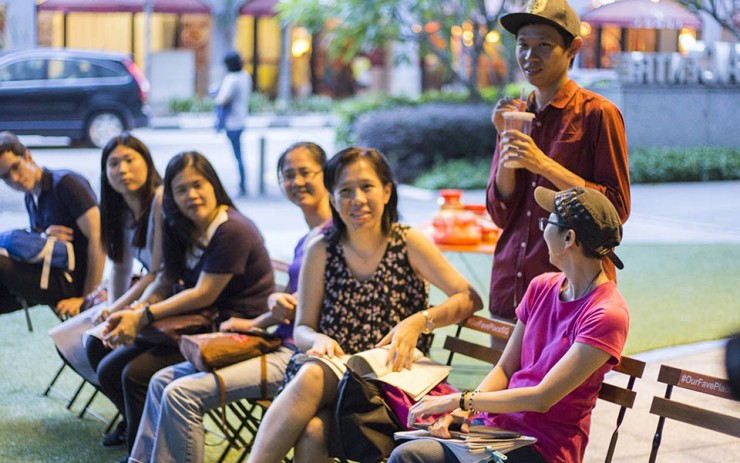 Happy Chinese New Year to all our Chinese readers and a Happy Sunday to our non-Chinese friends! To welcome the Lunar New Year, we had a special themed Pianovers Meetup planned this week, complete with an explosion of the colour red, delicious Chinese New Year goodies, Mandarin oranges and an array of Chinese New Year-themed music.

Yong Meng invited the early Pianovers Adelyn, Jennice, and MJ to Maxwell Food Centre for a pre-meeting dinner, where they got to know each other better. After dinner, the group headed back to The URA Centre and Yong Meng had a chance to speak to a couple that was passing through. The couple, David and Alice, was so enamoured by what was described that they decided to join the Pianovers. Much to our delight, the couple ended up staying through the entire meeting!

Not only was the 25th Pianovers Meetup for welcoming the Lunar New Year, Yong Meng also welcomed a new feature on ThePiano.SG website – Pianovers Meetup Statistics. The Statistics page keeps track not only of those who played at the Meetups (with photographs to add), but also how many songs, what songs, and a log of all the Pianovers Meetups' greatest hits. You might just see some of the regulars who showed up that night on the new Statistics page. Regulars like: György, May Ling, Audrey, Siew Tin, Albert, Joseph, Jimmy, Corrine and Elyn.

Having introduced everyone to the website and the event, The Registered Players Segment began, where Albert kicked it off with songs from a Japanese and Chinese composer: "長崎の女" (Nagasaki No Hito) by 林伊佐緒 (Isao Hayashi) and "白雲長在天", by 刘家昌.

Next was Corrine who treated us to an interesting rendition of Theme from 西游记 (1986) Journey to the West, by 许镜清. This is rarely played as a piano arrangement. Some of us might not be aware that the theme song for the show is 云宫迅音, while the end song is 敢问路在何方.

Siew Tin played 小城故事, by 翁清溪 (Tony). Tony wrote the track for “小城故事” the movie, and had trouble finding the right person to sing on the track. However, his eventual choice of Teresa Teng actually brought the song to the height of its fame. Known for playing Mandarin classics, Siew Tin surprised us with her second choice of song this week when she played Oh My Darling, Clementine.

The origins of the American folk ballad is unclear but was attributed at times to Percy Montrose and other times to Barker Bradford, and hitting the top 20 Billboard Charts in 1941 with Bing Crosby’s version. Though it sounds like a sad ballad about a lost lover “Clementine”, many have interpreted it as more of a “tongue-in-cheek parody of a sad ballad”. It appears that the song mocks Clementine’s enormous feet and pokes fun at her almost comedic death. “Oh My Darling, Clementine” has also been used in various other songs such as the Chinese New Year song 新年好呀 and in Barney's There are seven days in a week.

Jennice played October (Autumn Song) by Tchaikovsky. “October (Autumn Song)” is one out of twelve short pieces from Tchaikovsky’s set “The Seasons”, where every piece represents a month of the year. All twelve pieces were written in 1875 after accepting a commission from Nikolay Matveyevich Bernard, the editor of the St. Petersburg music magazine “Nouvellist". The composer and editor worked closely to produce the twelve tracks, including the drafting of subtitles and deciding on which final composition to be publicly released.

Jennice also played one of the pieces considered to be Chopin’s most famous – “Nocturne in E-flat major, Op. 9, No. 2”, written when he was just 20 years old and dedicated to Madame Camille Pleyel.

After Jennice was May Ling, who played Wait There by Yiruma, who will soon be in Singapore for his concert at The Star Theatre on 25 Feb 2017. She also played 春风吻上我的脸 by 姚敏 (Yao Min). Yao Min and Yao Li also sang the famous “恭喜恭喜” song, the origins of which is actually a post World War 2 celebratory anthem.

Alice, who was just passing by but decided to join in, treated the group to one of the most popular songs played at the Meetups – 月亮代表我的心 (The Moon Represents My Heart) by 翁清溪, originally sung by 陈芬兰 and made popular by Teresa Teng.

This was followed by Jimmy, who played a medley of “贺新年” and “恭喜恭喜”, injecting his signature jazz style into them.

Closing The Registered Players Segment was Joseph, who delight everyone when he sang and played 恭喜恭喜 by 陳歌辛 (Chen Ge Xin). He also enthralled with his closing number, 小幸运 by 张逸帆, theme song for the Taiwanese movie “我的少女時代” (Our Times).

True to the theme, the Pianovers took several photos sporting their festive red apparel and holding Mandarin Oranges in their hands. Many of the Pianovers also indulged in the Chinese New Year snacks and goodies that were brought and contributed while they chatted with others. There were also those who showed their talent and skill on the pianos during The Open Segment. Everyone left with spirits lifted, and many classic Chinese New Year wishes were heard echoing in their goodbyes.

All music is beautiful.