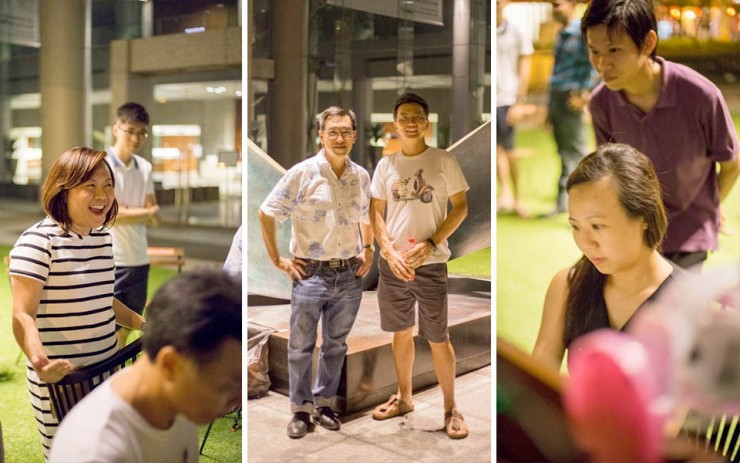 The fifth meetup of Pianovers took place in earnest on 28 August 2016. Pianover Meetups aim to strengthen the bond between fellow piano lovers and take place every Sunday at the URA Centre. Since their creation, the weekly gatherings have seen both experienced and novice piano lovers from all walks of life come together to play the piano, exchange tips and have a relaxing weekend.

The weekend music session has since taken of its own, with word spreading among the music community and new people joining every week. People who attended previously are coming back with their families and friends.

Peter Prem and Joshua Peter, the father-and-son team, have been attending the Meetups regularly, and are now dubbed the Boogie Woogie family for playing this genre a lot, and being so good at it.

We also had the chance to hear Somewhere Over The Rainbow played by Timothy Goh and sung by Chris Khoo, together with newcomers Ronnie Poh and Junn Lim.

Ronnie Poh, a staff nurse from Khoo Teck Phuat Hospital, graced the occasion with his rendition of Kiss The Rain by Yiruma.

Junn Lim, together with Chris Khoo and others, sung enthusiastically as Chris played Climb Every Mountain, the show tune from the 1959 musical The Sound of Music. To everyone’s surprise, Junn sang well, suggesting that she had received singing training.

Other new faces who appeared at this meetup included Gee Yong, Pauline Tan and Benjamin Tse. Pauline, a piano teacher, played Always, from the Korean television series, Descendants of the Sun.

Meanwhile, Chris Khoo, a regular face at the Meetups, delighted all present with Allemande In A. Given that he was known for playing pieces from the 19th and 20th centuries, playing a Baroque composition this time certainly took us all by surprise.

Joseph Lim, a busker and also another familiar face, gladly took to the piano to do what he knew best: Mandarin pop. This time, Joseph performed 遇见, by Stephanie Sun, a piece that evoked fond memories among some of us who grew up in his generation.

Another Mandarin pop was performed by Jimmy Chong. He delighted those present with "她说", from Singaporean Mandopop singer JJ Lin.

In an unplanned but nonentheless welcome development, a duet appeared. Stormie Chia, who had attended a previous Pianover Meetup session, performed 四手联弹 with Yong Meng. Attendees present would have remembered this piece as having originated in The Secret (不能说的秘密), starring Jay Chou and Gwei Lun-mei. In this movie, the piece was played by the lead actor and actress, who played Ye Xianglun and Lu Xiaoyu, respectively.

The Pianover Meetup received some welcome guests too, even though they did not play the piano. Yong Meng’s friends from BNI IZAQ, a business network group, came over to support the event. Their attendance was appreciated very much, as ThePiano.SG aims to propogate the love of music among all.

Alexandre Courla-Biron and his family, who happened to be in the vicinity, dropped by and stayed throughout the event.

As the evening turned into night, dusk became night and road traffic dwindled on this pleasant Sunday evening, the bodies became weary. The spirits, however, soared. Seeing a group of piano enthusiasts gathered around two pianos in downtown Singapore and pursuing their passion in the night was truly an interesting sight.

In fact, one group was so eager to meet and play together again, that it made impromptu arrangements to do just that. Ronnie Poh, Joseph Lim, Pauline Tan and Sng Yong Meng, reunited at the same spot on Wednesday, barely three days after the Sunday evening session. They started at 11am, broke for lunch, and returned to play, all the way till late afternoon.

With such enthusiasm around us, how can you afford to miss the next Pianovers Meetup? Come join us every Sunday at the URA Centre!

Jane's Addiction has only put out new music when our hearts were in and when we had something to say creatively.