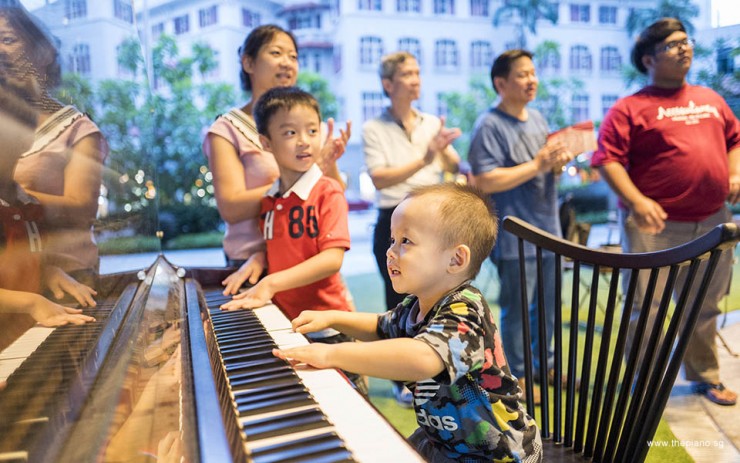 Eager Pianovers gathered at the usual meeting point once again on Sunday, 27 August 2017. Having met at Piano Park @ URA Centre for the past year, the passionate piano lovers have now become friends, bonded by their common love for piano music. Every Sunday, the Pianovers arrive here to enjoy and exchange tips about music.

The brainchild of ThePiano.SG Founder, Sng Yong Meng, this event sees piano lovers from all walks of love come together, regardless of musical background, age, gender, languages, and religion. From its humble beginnings in July 2016, Pianovers Meetup continues to see new people coming every week and regular Pianovers bringing their friends, families and even piano students to join in the fun!

This evening, Zafri and Albert came early to join Yong Meng for dinner. Albert, in particular, has been coming early on a weekly basis, to help Yong Meng with the logistics – Thank you so much for your help, Albert! Dinner was taken at Maxwell Road Food Centre, just across the road from The URA Centre. While dinner is simple, it has the effect of bringing people closer together. 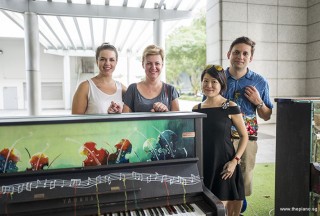 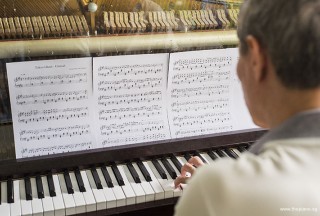 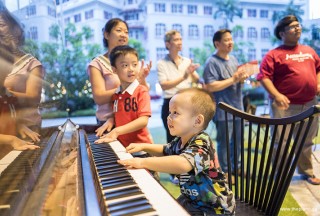 By the time the trio returned from dinner, Julia and Gee Yong had already arrived and playing at the piano. At Pianovers Meetups, we sometimes receive passers-by and today was one of those days. A group of tourists from Poland walked by and took pictures of the event. Julia was quick to think on her feet, immediately playing "Nocturne in E-flat major Op. 9 No. 2" by Polish composer, Chopin, to welcome them. The group ended up taking a photograph with Julia eventually. Music transcends boundaries and connects people!

Apart from Julia and Gee Yong, there were a few others who arrived early - Woan Ling, her student Tan Zhi Zhen and his family (parents Lynn and Kenneth, and one younger brother), Pat, Siew Tin, Yeo Ming, Janice and Grace (and her family, comprising her parents and brother Sean). Woan Lin, Zhi Zhen and his family were joining us for the first time!

Albert, one of our regular Pianovers and one known for playing Chinese classics - to our surprise - today tried to play "Unravel (Theme from Tokyo Ghoul)", an anime piece, sightreading from Zafri’s scores. At Pianovers Meetups, it is always such a joy to see children at the keyboard. This evening, we were happy to see Zhi Zhen’s brother having a go at the piano!

When the lights at The URA Centre came on, the programme proper got underway! The first segment was the Mini-Recital. Here, pre-registered piano players went up to one of the pianos to perform.

The turnout at this evening’s Pianovers Meetup included many more who arrived later. The group comprised Jimmy, May Ling, Karen, AJ, May and Corina. May and Corina were here for the first time and were invited by Teik Lee.

The Mini-Recital segment of the Meetup started with Pianover Yeo Ming’s playing of Gake no Ue no Ponyo by joe Hisaishi. This was Yeo Ming’s second attempt at this piece, after having first played it in Meetup #42. This composition, which won the Outstanding Achievement in Music at the 32nd Japan Academy Prize, was used in the 2008 Studio Ghibli film “Ponyo”, a film featuring a goldfish that wants to transform into a human girl after befriending a five-year-old human boy named Sōsuke.

Next up was Siew Tin, who performed 独角戏 by 季忠平. This piece, written in 1996 and performed by Valen Hsu (许茹芸), was compiled in the ablum, “如果云知道”. Valen is a classically-trained pianist who started playing the piano when she was four. Her talent was noticed while she was performing in a restaurant in Taipei. She was subsequently awarded a contract with "What’s Music" record label and started working on her first commercial album before she turned 19. Valen published "钢琴记事簿", a compilation of some of her more popular pieces, but performed in solo piano.

Siew Tin also performed Love Me Tender, by George R Poulton. Although this piece was released in 1956, it was actually adapted from a ballad dating back to 1861. Known as "Aura Lee", this was a sentimental ballad about the Civil War. To think that two compositions composed 95 years apart would be connected in such an amazing way!

Tang Zhi Zhen was the next to perform. He's the student of Lim Woan Ling, a piano teacher, who brought him here this evening. Accompanying Zhi Zhen was his parents and younger brother. Zhi Zhen performed Firefly and Moonlight Waltz. It is always heartwarming to see teachers bring their students to the Meetups. Apart from letting them profit from real-world exposure to music in a different content, the Meetup also allows them to gain confidence in public performances!

Gee Yong performed a piece by Jay Chou, known as 最长的电影. This piece was written in 2007 and has found its way into the album "我很忙".  Incidentally, Jay Chou’s 2007 movie, The Secret, 不能说的秘密, featured a piano duel.

Grace performed The Returning Hunter from Eskimos, by Amy Cheney Beach. Grace is preparing for her Grade 5 examination, which follows the ABRSM 2017-2018 syllabus. The examination will take place in two weeks. All the best, Grace, for your examination!

Albert played two pieces, "假如我是真的" by 欣逸, as well as "夢中人" by 陈歌辛. The first piece was used as the theme song of a 1981 movie of the same name, which starred Alan Tham, a Hong Kong artiste. The second piece was published in 1995 and performed by Faye Wong. This piece was to go into Faye Wong’s second singles in Japan. The songwriter 陈歌辛 was also the composer who wrote Chinese New Year song, Gong Xi, Gong Xi.

Julia, another regular Pianover, brought us Autum Leaves, by Joseph Kosma. Autumn Leaves is a jazz piece that was created by Hungarian-French composer Joseph Kosma.

Teik Lee delighted Pianovers with his rendition of Rocoberry’s I Will Go To You Like The First Snow. This was an original soundtrack for the 2016 hit Korean television drama "Guardian: The Lonely and Great God". The final episode of this series garnered 18.68% viewership, and made it the second highest rated drama in the world of Korean cable television.

Last but not least, we heard from Zafri, who played the same medley that he played in Meetup #47. Zafri arranged and presented a medley comprising his favourite pieces - "Fairy Tail Main Theme" by Yasuharu Takanashi, "Unravel (from Tokyo Ghoul)" by Tōru "TK" Kitajima, "His Theme (from Undertale)" by Toby "Radiation" Fox, "Imperial March (from Star Wars)" by John Williams, "Megalovania (from Undertale)" by Toby "Radiation" Fox, "The Reluctant Heroes (from Attack on Titan)" by Hiroyuki Sawano, and "Lit (from Koe no Katachi, A Silent Voice)" by Kensuke Ushio. Well done, Zafri!

Following the completion of the Mini-Recital, we now proceeded with the last item of the evening, the Open Segment. This part of the evening sees Pianovers jamming at the two pianos and sharing their knowledge informally. Sharing and bonding were in abundance, as the Pianovers present excitedly supported one another in his/her quest to learn more about music. We can’t help but love the kind-hearted nature of Pianovers and the open sharing happening all around us!

Yong Meng took the opportunity this evening to inform Pianovers about ThePiano.SG’s collaboration with Yamaha in its Piano Fair. Yamaha Music Asia has partnered with ThePiano.SG on its piano donation program Pianovers Assist for those in needs.

Pianovers Assist sees kind donors contributing their used pianos to ThePiano.SG. These pianos would then be matched with people without the financial means to have their own pianos. The beneficiaries get to keep the pianos for six months, after which the pianos will potentially be transferred to the next person in need.

The show business has all phases and grades of dignity, from the exhibition of a monkey to the exposition of that highest art in music or the drama which secures for the gifted artists a world-wide fame princes well might envy.