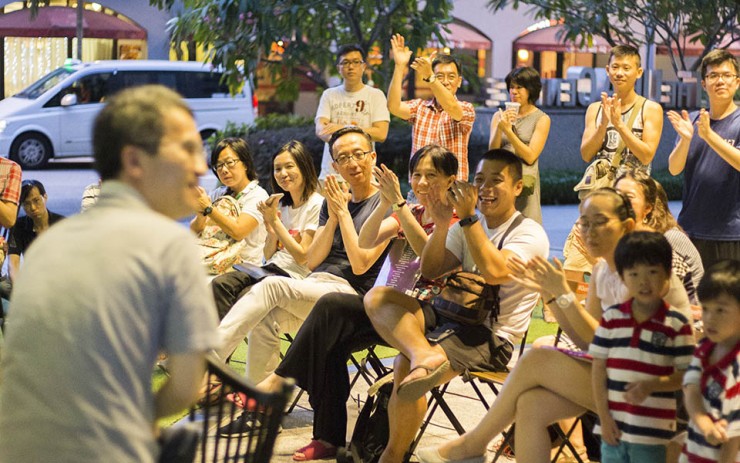 Sunday, 23 July 2017, saw yet another enjoyable gathering of a group of piano lovers. Happening every Sunday at 6:30pm, Pianovers Meetup is a gathering of the people who have been affectionately called Pianovers. This weekly gathering is organised by ThePiano.SG, the brainchild of Founder Sng Yong Meng, who has made it his mission to build a community of passionate Pianovers, a group of people who pursue music.

It started in July 2016 and a year later, it has grown to a sizeable group. Although Pianovers Meetups primarily attract aspiring pianists, we also warmly welcome those who cannot play but nonetheless enjoy listening to the sweet sound of music. With two upright pianos always available at Piano Park @ URA Centre, both aspiring pianists and ardent music listeners have a great platform in which to connect, play and listen to music!

Every Sunday, at 5:30pm, a team of Pianovers arrives to enjoy dinner together. Even though dinner is not an official part of the Meetup, it does serve as an additional platform for the attendees to meet and bond. This Sunday was no different. An hour before the Meetup started, a group of Pianovers was already present. This week, we had Pat, Wayne, Kinuko, Kasandra and Jonzon joining Yong Meng. Kinuko and Kasandra were attending for the first time, and we warmly welcome them into the Pianovers family! Together, they trooped to the nearby Maxwell Road Food Centre for some delicious local food.

When the dinner party returned to The URA Centre, more Pianovers already waiting. The group comprised both regular Pianovers as well as newcomers. Pat, Ploy, Audrey, Teik Lee, Paul, Gee Yong, and Sen were regular attendees, and this week, they were joined by Karin, Samantha and a group comprising Chuan Li, Marky and their friends. Also present were Michelle and her family, consisting of twins and daughter.

During today’s session, Yong Meng announced two important milestones that happened in the past week. The Pianovers Meetup, which Pianovers have grown to be so much a part of, has been featured in an official government publication. It appeared in the July/August 2017 issue of Challenge, which is the magazine of the Public Service Division, Prime Minister’s Office and has a reach of 120,000 public officers. This is the first time an event from ThePiano.SG has received such wide coverage in a single organisation.

Also happening in the same week was an appearance by Yong Meng and a group of Pianovers at Zhonghua Primary School. ThePiano.SG was invited to participate in the school’s Art Festival, happening over four days, from 17 to 20 July 2017. Yong Meng did an assembly talk at 7:30am, during which he shared with the staff and students about Pianovers Meetup. We invited Asher Seow, a Primary 2 student from Fairfield Methodist Primary School, to play for Zhonghua Primary School. He play the tune, "Tale as Old as Time", from the Disney movie Beauty and the Beast. As Asher performed, Zhonghua’s staff and students were visibly enjoying themselves as they joined in the singing. Over the next four days, ThePiano.SG had a piano booth, using a digital piano from the school, and we thank the Pianovers who volunteered their time to assist!

Following the completion of the announcement section, the main event of the evening started. This was the Mini-Recital, during which Pianovers who had pre-registered to play went up to the one of the piano to perform. Today's Mini Recital began with a little quiz, a mystery of sorts. Chris played a piece without announcing the title, which he invited Pianovers present to guess. He later revealed it as the Theme from the TV Series "Roots", based on the 1976 novel "Roots: The Saga of an American Family" by Alex Haley, which sparked interest in genealogy and appreciation for African American history.

Siew Tin brought us back to the 80s with 晚风 by 黄霑, which was used in the 1984 movie "上海之夜" (Shanghai Blues), and performed by 叶倩文 (Sally Yeh). This was followed by a second piece, an Indonesian Folk Song, titled 岜厘岛 (Bali Island).

Vanessa, who has performed multiple times at the Meetup, played Etude Op. 10 No.12 (“Revolutionary) by Chopin. Given that Vanessa had always played contemporary pieces, this evening’s surprising performance of a classical piece was an eye-opener for everyone present. It surely gave us an unprecedented glimpse of her other side. Dedicated to his friend, Franz Liszt, Chopin’s Revolutionary Etude was composed in 1831, and was the last of his first set, Etudes Op.10. It was noted that the piece originated from the the humiliating defeat of the Polish Revolution. As Chopin wrote with a heavy heart, he was reported to have said, “All this has caused me much pain. Who could have foreseen it!”

Isao performed All By Myself, a piece by Eric Carmen in 1975 whose verse is based on the second movement (Adagio sostenuto) of Sergei Rachmaninoff's Piano Concerto No. 2 in C minor, Op. 18. When Carmen composed this piece, he was under the impression that Rachmaninoff's music was in the public domain and there were no copyright claims on it. After the album’s release, however, he was contacted by the Rachmaninoff estate and informed otherwise. The two parties reached an amicable agreement, under which the estate would receive 12 percent of the royalties from all sales of the "All by Myself "album.

Zhi Yuan returned to play Sonata in E flat Major, K282 1st Movt, Adagio by Mozart, one of the greatest composers ever lived, but also infamous for this scatological humour .

Wen Liang, who was new to the Meetup, was here today with his family, and twin brother, Wen Xian. At a young age, he also confidently played two numbers Good Morning by W. Mueller and Gavotte for everyone!

Albert entertained us with "一帘幽梦" by 刘家昌, and "Bengawan Solo" by Gesang Martohartono. It is interesting to note that this famous 1940 Indonesian song about the Solo River that flows through the central and eastern Java was very popular with the Japanese soldiers who occupied the Indonesia during World War II. The Japanese brought this song back to Japan after the occupation ended. Decades after the war, in 1991, a group of appreciative Japanese war veterans erected a statue of Martohartono in a Surakarta park. At that time, Gesang himself was still a resident in the city. He became a nationally renowned figure and passed away at the age of 92 in May 2010.

Chuan Li, a newcomer, came with his group of friends and entertained us with Etude-Tableaux No. 8 in D minor, Op. 39 by Rachmaninoff, collected in the second set of Etude-Tableaux. Chuan Li is also scheduled to perform on 25 Jul 2017 in his event rach'd with Marky.

Wayne entertained us with だんご大家族 (Big Dango family) by Jun Maeda, used in the ending theme for the Japanese anime "Clannad". Clannad was initially released as a visual novel 2004 for Windows PCs. Its story revolves around the life of Tomoya Okazaki, a high-school delinquent who meets many people in his last year at school and helps resolve their problems.

Next, Teik Lee played 蒲公英的约定 by Jay Chou. It is written in 2007 for Jay Chou's movie "不能说的秘密" (The Secret), and his album "我很忙". He had invited his friend, Samantha, to join us today.

Grace, although new to the Meetup, was eager to show us two titles: Kinderszenen Op. 15 No. 1, Von fremden Ländern und Menschen (Of Foreign Lands and Peoples) by Robert Schumann, and Sonata in C Major, K. 279, 3rd Movt, Allegro by Mozart.

May Ling concluded the Mini-Recital with Misirlou by Nicolas Roubanis, a traditional song from the Eastern Mediterranean region. The earliest known recording was by Tetos Demetriades, in 1927. More than a decade later, a Greek-American music instructor by the name of Nick Roubanis released a jazz instrumental arrangement of the song. His claim of being the composer has never been legally challenged, hence he is still officially credited as the composer today. In Greece, however, people still recognise Roubanis or Patrinos as the composer.

After the Mini-Recital ended, the Open Segment started. In this segment of the evening, Pianovers can play freely and interact, with no preset agenda. It is not uncommon to see Pianovers openly sharing their knowledge with one another! Encouragement was evident everywhere and open sharing was happening. A group photograph was taken and the group retired for the night.

In celebration of the First Anniversary of Pianovers Meetup, ThePiano.SG will conduct its very first Pianovers Recital on 20 August 2017. This event is special in which Pianovers actually perform on a stage in a true recital environment. The Performers Tickets were sold out in less than 24 hours, however, Guest Tickets are still available. Hurry and register today! See all of you at the event!

Music is only love looking for words.