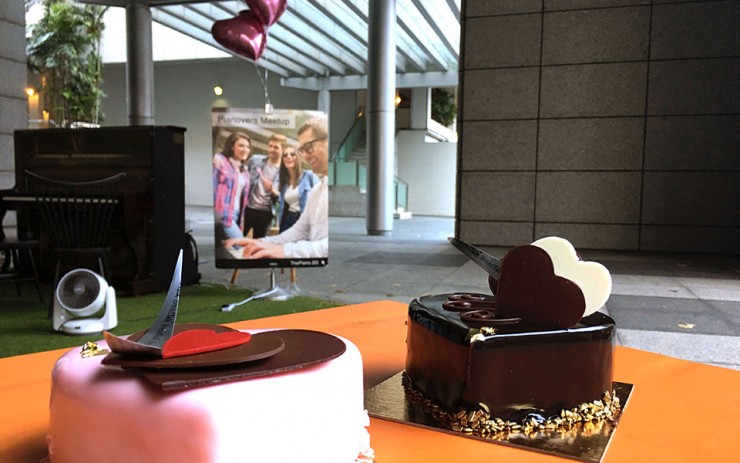 The night began as usual with a customary dinner at Maxwell Food Centre. After taking a brief hiatus because of the Chinese New Year festivities, the return of the Pianovers Meetup was greeted with many newcomers (Chan, Yu Hng, Rachel and Vanessa) and familiar faces (Pat, Vanessa Yu and her partner Mitch) during the dinner. Apart from the many couples that were present, the love between families were also very much present. Sisters Jinny and Jaime Goh brought along their respective spouses, kids (Heok Hwa, Jun Theng and Cheng Leng), as well as their parents and younger sister.

After the dinner, the group headed back to The URA Centre where Yong Meng introduced his vision for a close knit piano community in Singapore. The group then interrupted the usual program with an impromptu photo that included the balloons and the cakes that were brought. They were not just decorative pieces but also a source of delight for the kids and served as a catalyst for conversation between the adults at the meetup. After the photo was taken, everyone returned to their seats for the start of The Registered Players Segment.

The first song played was a duet by Vanessa Yu and Mitchell of the popular love song, Micheal Buble’s Everything. This song was different from the other songs in his album as it followed a minimalistic style with very few instrumentation and void of a horns section. The melody of the song is driven mainly by guitar, piano and occasional electric guitar licks, giving emphasis to Buble’s warm smooth voice.

Following that was Loga, who played Prelude in F minor, BWV 857 by J.S. Bach, perfect for the upcoming celebration of Bach’s 332nd birthday. Fans of Bach can sign up to play during the event along with these amazing performers! ThePiano.SG was present at last year’s celebration and connected with some of the performers.

Next, we were treated to a special set of Mandarin and Japanese songs by Albert, Siew Tin and Wen Jun. Albert played "我怎能离开你" by 古月, sung by Teresa Teng, and "ひとり酒場で (Hitori Sakaba De)" by 猪俣公章, first performed by 森進一 in 1968.

Siew Tin played 茉莉花, a traditional Chinese folk song from the time of Emperor Qianlong of the Qing Dynasty, and 一帘幽梦 a Chinese oldie by 刘家 昌.

Isao played a string of songs from the recent hit movie musical starring Emma Stone and Ryan Gosling, La La Land . Starting with Mia and Sebastian's Theme, followed by Another Day of Sun and ending with City of Stars, all of which were composed by Justin Hurwitz. The movie was highly acclaimed and dominated during award season with a record number of 14 nominations since “Titanic” (1997) and “All About Eve” (1950) at the Academy awards as well as winning all 7 categories it was nominated for at the Golden Globes (this included Best Original Score and Best Original Song).

Corrine played Salut d'Amour, by Edward Elgar, originally written for violin and piano. Completed in July 1888, he called it "Liebesgruss" (Love's Greeting) because the language of his then-lover Caroline Alice Roberts was German. It was adapted in the key of E minor for the 2015 video game Fallout 4 as one of the "Classical Radio Station" songs. It was also made into a song titled “Woo thou, Sweet Music” with lyrics by A.C Bunten.

Jinny Goh, who brought her parents, sister and kids, played the song Somewhere Out There performed by singers Linda Ronstadt and James Ingram and originally by James Horner, Barry Mann, and Cynthia Weil. Made famous by popular animated film “An American Tail”, the lyrics tells the tale of a love plagued by distance and longing. In the film, the song is sung by siblings Fievel and Tanya Mousekewitz and highlights the brotherly and sisterly love they have for each other. However, in a pop version of the song, something more romantic is insinuated.

Heok Hwa played a classic by Beethoven, Ode to Joy. The Symphony No. 9 in D minor, Op. 125 ("the Choral”), completed in 1824, is Beethoven's last complete symphony. It is well known up till today as one of the best compositions in classical music. Beethoven was the first major composer to utilise voices in a choral symphony. Four voices and a chorus can be heard during the final movement of the song. The words belong to "Ode to Joy", a poem written by Friedrich Schiller in 1785 and revised in 1803, with only subtle adjustments from the composer. The composer made his first on-stage appearance in 12 years to perform this piece and was later reported that Caroline Unger, who sang the contralto part at the first performance, turned Beethoven, who was then almost totally deaf, towards the applauding audience at the end.

The sister, Jun Theng, whose birthday fell on Valentine's Day itself played Lullaby, and Honey Bee March. Cheng Leng, gal of Jaime, played Party in the Sky and Happy Birthday, a song sung globally by many but has its mysteries . Jaime played 月亮代表我的心 (The Moon Represents My Heart), a favourite amongst Pianovers, originally sung by 陈芬兰 but made popular by Teresa Teng.

Jimmy ended The Registered Players Segment with another medley of songs from “La La Land” – “Another Day of Sun”, “City of Stars”, “Someone in the Crowd” and in true Valentine’s Day spirit, “Sebastian and Mia's theme”.

The Open Segment was filled with chaoer, laughter, and music. Regular Pianovers took the opportunity to catch up with one another, as well as get to know the newer Pianovers. Regular Pianovers like May Ling, Audrey, MJ, Pat, and Xavier were also present that night, certainly contributing to the lifted spirit within The URA Centre while many of the newcomers took the chance out of the spotlight to have a go at playing the piano and jamming. All in all, the night was concluded with everyone leaving in high spirits.

I think its so cool that you can pick up the guitar and create something that didn't exist 5 minutes ago. You can write something that no ones ever heard before. You have music at your fingertips.