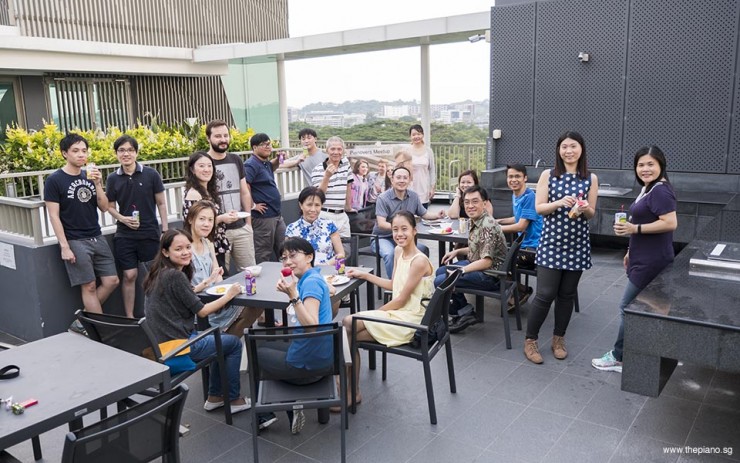 On Sunday, we brought you the 31st Pianovers Meetup from an exciting new location, the Sky Lounge @ Ripple Bay. This is due to the courtesy of Zensen, who also hosted the 12th Pianovers Meetup at his beautiful home. Overlooking the island skyline, the event was set to start at 5pm.

The event was held in the function room at Ripple Bay, which meant the moving of chairs, tables, instruments (Zensen’s white Casio), and some other Meetup equipment, requiring three trips in all. With the help of Yong Meng, Siew Tin, Elyn and Zensen, setting up was a breeze. Everything was setup well ahead of time, from the chairs that were neatly arranged to accommodate the arriving Pianovers, to the equipment Yong Meng brought from his car. A special mention to the three of them for assisting in the sweltering heat, thank you! We really appreciate your selfless help!

As soon as 5pm rolled around, Pianovers started to pour in. Bringing food and snacks for the group, it was a potluck-style meetup. There were pizzas, fruits, dim sum, wings, otah, nasi lemak, bee hoon, egg tarts, potato chips, tuna on biscuits, home-made Ching Tng, curry puffs, salads, roast chicken, chicken pie, and plenty more going round. The Meetup began with some casual chat at the barbecue pit. The moment was captured by a lovely group photo.

The function room was the perfect backdrop for The Registered Players Segment, with two tall glass windows providing a panoramic view of the Paris Ris skyline for Pianovers while they played. First to play was soon-to-be married couple Vanessa and Mitchell, who played “Love Will Tear Us Apart” by Joy Division(Ian Curtis, Peter Hook, Stephen Morris, Bernard Sumner) and Tale As Old As Time by Alan Menken, a song from the classic “Beauty and the Beast” movie. A remake starring Emma Watson is currently in theatres.

Following them was Albert, who impressed with "長崎は今日も雨だった" by 彩木雅夫. The song reached number two within a week after its release on 1st Feb 1969 and ranked eighth during the year 1969. He also played "用愛將心偷" by 顾嘉煇, the theme song from the 1980 HK TV Series "千王之王".

Theng Beng thrilled all the Stefanie Sun fans in the crowd with two numbers by the local singer, 天黑黑 by 李偲菘 from her 2000 self-titled album and 遇见 by 林一峰, the theme from the 2003 movie “向左走，向右走”.

Corrine played Rialto Ripples by Gershwin, released in 1917. Gershwin is also popularly known by his pieces "Rhapsody in Blue" and "An American in Paris”. Siew Tin, known for her choice of Mandarin songs, certainly did not disappoint with 另一种乡愁 by 谷村新司, re-performed(翻唱) by 凤飞飞 .

George played River Flows in You by Yiruma. The song seem to be a very popular choice at the Meetups. Those familiar with Disney songs would have been familiar with May Ling’s choice of Colours of the Wind by Alan Menken, popular in the 1995 Disney animated feature film “Pocahontas”.

The second duet of the night came from Chris and Zensen, who played the 1825 piece Ave Maria by Franz Schubert, with Chris on the piano and Zensen on the pianica. Originally titled “Ellen’s Third Song”, the opening line of the piece (Latin for "Hail Mary”) is said to have led to the adaptation of the traditional Roman Catholic prayer "Ave Maria”. The two songs have become so entwined with each other that it is often mistaken that Schubert wrote the Latin “Ave Maria”.

Ace played Kass's Theme by Manaka Kataoka, from the well-known fantasy action-adventure game “The Legend of Zelda: Breath of the Wild", developed and published by Nintendo.

Next was Yu Tong, who played You Are My World by Lee Yoo Jin, from "The Legend of The Blue Sea OST Part 2”, a South Korean TV series that went on air on 16 Nov 2016. The series tells the story of love between the son of a noble family and a mermaid.

William played 沿海地帶 by 马奕强, William shared with us that the opening of this piece is from Beethoven's Pathétique (Sonata No. 8 in C minor, Op. 13), Adagio cantabile. Along with being performed by 弦子 in her 2006 album, it was also used in the ending theme for the TV series "深瞳" and “天堂来的孩子".

Closing The Registered Segment was Jerome, who entertained with You Needed Me by Randy Goodrum. Though it was popularly covered by Boyzone in 1999, it was first performed by Anne Murray in 1978. It earned Murray the Grammy Award for Best Female Pop Vocal Performance at the 21st Grammy Awards, making her the first Canadian to be awarded the honour.

After The Registered Players Segment, we were introduced to Zensen’s upcoming segment for the website, “Music Talks”. His segment will tackle comprising topics like "Sight Reading vs Play-by-Ear", "Should musicking be a solitary or social activity", or "Motivation and Pathways for Graded Exams”. “Music Talks” will be available free to all, so look out on the website for the launch.

This was followed by a photo taking session in the Sky Lounge. Albert was certainly the life of the party, enthusiastically posing for photos and stealing the limelight of anyone that was in the room. Other than him, the rest of the group had a ball taking “selfies” and “wefies”, documenting every moment of the Open Segment.

Thanks to everyone who came out to the week’s special location despite the heat and humidity. Extra thanks goes out to the Pianovers who helped rearrange the tables and chairs, as well as those who helped with the moving of equipment. We know you perspired profusely that balmy evening, and we genuinely appreciate your assistance!

On the other hand, what I like my music to do to me is awaken the ghosts inside of me. Not the demons, you understand, but the ghosts.