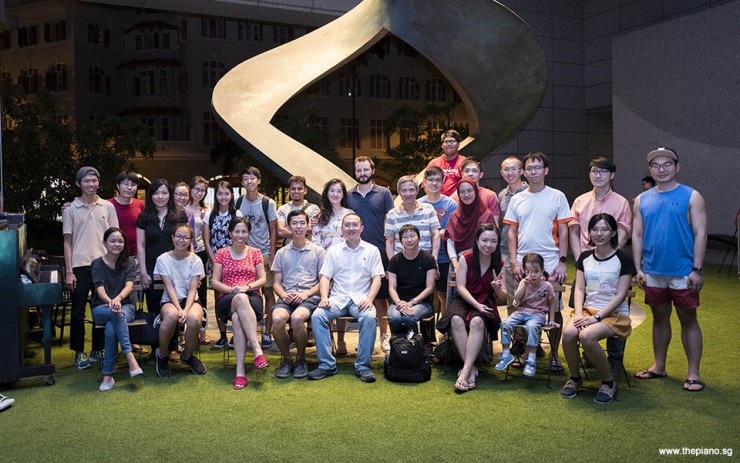 Once again, Sunday evening saw the convergence of piano lovers, or Pianovers, at the Piano Park @ URA Centre. Without a doubt, this was a time that Pianovers had been eagerly waiting for. After a week of hard work, what better way to relax and unwind than to meet up with fellow piano lovers and bond over music?

Indeed, building a community of like-minded folks was one of the aims of ThePiano.SG, when it was founded by Sng Yong Meng, in 2015. One of the most important events in ThePiano.SG’s calendar, Pianovers Meetup is a weekly event in which aspiring pianists and non-players alike come together to The URA Centre to network and share tips with one another over music. Through selfless and open sharing, Pianovers have become a close-knit community. Now into its 46th instalment, Pianovers Meetup continues to connect people in the piano community!

Every Sunday, a group of Pianovers meets early, a full hour before the Mini-Recital starts, to have dinner and bond informally. This evening, we had Angie, Hua Shin, Yee Ling, Zafri, Jonas and Wayne join Yong Meng for dinner at the Maxwell Road Food Centre. Angie, Hua Shin and Yee Ling were here for the first time. What is laudable is that both Hua Shin and Yee Ling were to play a duet later that evening! We are very encouraged by the support accorded to Pianovers Meetups by our newcomer friends!

Following a delicious dinner of local fare, the dinner party then adjourned to The URA Centre. As the programme got underway, Yong Meng welcomed the newcomers, namely Angie (who had joined the early birds for dinner earlier), Paul (who hailed from India), as well as Wee Kang. Others who were present included the regulars like Jimmy, Herlina, Janice, Gerald and Wenqing, as well as Audrey. At ThePiano.SG, we are so glad to have the support of the regulars, who arrrive every week without fail.

When the lights at The URA Centre came on, the programme proper got underway! The first segment was the Mini-Recital. Here, pre-registered piano players went up to one of the pianos to perform.

Gwen started the Mini-Recital with Minuet in G that has been mistakenly thought to be an original composition by Johann Sebastian Bach, but now discovered to be the work of Christian Petzold. This popular melody has been covered by many artists, including Kelly Chen's A Lover's Concerto. Her version appears in the 1998 Chinese film "Anna Magdalena" as its signature tune. The movie itself is evidently named after Bach's beloved partner. In it, Chen plays a beautiful woman who enters the lives of two friends, played by heartthrobs Aaron Kwok and Takeshi Kaneshiro.

Next, Wayne performed Träumerei by Robert Schumann. It is the 7th movement in his set of thirteen pieces of music for the piano, written in 1838 - Kinderszenen, Op. 15. It is also the best-known piece - it is used in the opening and closing musical theme of the 1947 Hollywood film Song of Love, and the title of a 1944 German biographical film on Schumann.

Siew Tin entertained us with two Chinese pieces - 隐形的翅膀 by 王雅君, and 祈祷 by 三阳. The former was used as the theme song in the Taiwan TV Drama "爱杀17" (Bump Off Lover) and was originally performed by 张韶涵 (Angela Zhang).

Vanessa and Mitch returned to play "Theme from The Office" in a familiar piano-cum-pianica style, which they previously displayed in Meetup #28. The difference this time was that Mitch was the one playing the pianica. "The Office" was an American television comedy series aired between 2005 and 2013.

Attending the Meetup with her husband and daughter, Jenny gave us a sneak preview of Butterfly Lovers by He Zhanhao, and Chen Gang, which she is due to perform in the Pianovers Recital a week later. This 1958 work for violin and orchestra is for 梁祝, one of China's Four Great Folktales (中国四大民间传说), the others being the Legend of the White Snake (白蛇传), Lady Meng Jiang (孟姜女哭长城), and The Cowherd and the Weaving Maid (牛郎织女). Jenny accompanied her daughter, I-Wen, as she performed May Song.

Albert introduced us to "リンゴ追分 (Ringo Oiwake)" by Masao Yoneyama, and "我要為你歌唱" by 姚敏 this week. The latter was used in the 1956 Hong Kong movie "葡萄仙子".

Hua Shin and Yee Ling, both new to Pianovers Meetup, performed one of the pieces from their upcoming concert, to be held on 5 Sep 2017. Sheep May Safely Graze ("Schafe können sicher weiden") by J.S. Bach is the ninth, and also the most familiar movement of the 1713 Hunting Cantata. Comprising fifteen movements, the cantata was composed for the 31st birthday of Duke Christian of Saxe-Weissenfels. A cantata is a vocal composition with an instrumental accompaniment, typically in several movements and often involving a choir.

We were very happy to see Yeo Ming back again. This time, she played Reverie by Debussy, which was one of his first solo piano works to make an impact. Reverie was composed by a young Debussy in 1890, at the age of 28 years old. His other famous works include "Deux arabesques", and "Clair de Lune".

Yen-Fay and Ming Yang, who attended the Meetup last week, were back together with their piano teacher, Herlina Ong, to perform the same pieces for a good reason - they are participating in the Singapore Asia Youth Piano Competition on 19 Aug 2017! The pieces were Etude Op. 10 No. 3 (Tristesse) by Chopin, Allegretto: second movement from Sonatina in A, Op. 41 No. 1 by Johann Baptist Wanhal, Bow-Chicka-Wow-Wow by Ben Crosland, and The Merry Peasant, Returning from Work by Robert Schumann. We at ThePiano.SG would like to wish them all the best in their competition!

Zafri arranged and presented an amazing medley of his favourite pieces - "Fairy Tail Main Theme" by Yasuharu Takanashi, "Unravel (from Tokyo Ghoul)" by Tōru "TK" Kitajima, "His Theme (from Undertale)" by Toby "Radiation" Fox, "Imperial March (from Star Wars)" by John Williams, "Megalovania (from Undertale)" by Toby "Radiation" Fox, "The Reluctant Heroes (from Attack on Titan)" by Hiroyuki Sawano, and "Lit (from Koe no Katachi, A Silent Voice)" by Kensuke Ushio.

Fans of Dundee United Football Club would be happy to hear May Ling's rendition of Love Is In The Air by George Young, and Harry Vanda, which is often sung at football matches. In addition, George Young himself performed this song at the Closing Ceremony of the 2000 Olympic Games in Sydney.

After his first appearance in Meetup #44, Joe returned with "I’m Not The Only One" by Sam Smith, which was part of the 2014 debut studio album "In The Lonely Hour".

Desiree concluded the Mini-Recital with "Prelude in G flat Major Op. 23 No. 10" by Sergei Rachmaninoff. Composed in 1903, it is part of Rachmaninoff's Ten Preludes, Op. 23. Desiree will also be performing this piece at Pianovers Recital.

The last item on the agenda this evening was the Open Segment. This is another segment Pianovers look forward to every week. During this part of the evening, Pianovers passionately share their knowledge of music with one another. Others support the performers as they play. It is not uncommon then, to see pianists performing, while supportive Pianovers stand by their sides and sing in tandem with their playing.

Even for those who do not play, no time is wasted, as they refer to music scores and discuss the merits of compositions. This evening saw its fair share of interactions. As the piano lovers excitedly exchanged tips, Desiree and Vanessa could be seen comparing their hand sizes! Were they speculating about who could reach the furthest keys by stretching their hands?

We would like to express our heartfelt thanks to the anonymous donor who once again contributed to the Pianovers Meetup. This person had previously donated electric fans, followed by a power generator, to keep Pianovers cool at The URA Centre. This time, the donor contributed $200 towards the Pianovers Recital, a sum that would go towards buying drinks for the guests. We applaud the efforts of generosity by members of the public! We greatly appreciate your kind gesture!

On 20 Aug 2017, at 7:00pm, ThePiano.SG will conduct its very first Pianovers Recital. This promises to be an exciting evening of music, as our aspiring performers play on stage. Thanks to overwhelming support, all 110 tickets are fully subscribed! We look forward to a great evening!

I couldn't live without my music, man. Or me mum.