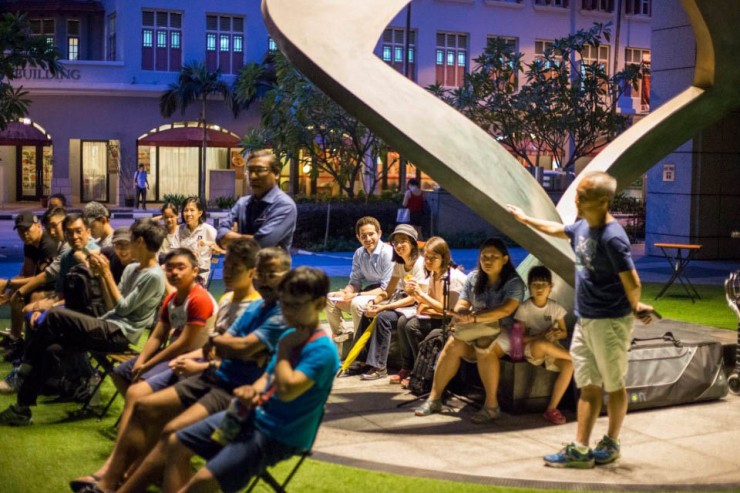 As the sun sets on another Sunday at The URA Centre, Pianovers from all over the island gather for the 18th weekly Pianovers Meetup. Unique talents and piano lovers of all ages and sensibilities are always present at the Meetups, this week being no exception. Felly Chitran and his family, who were invited by Peter Prem, were amongst some of the new faces in the group. Other newcomers included Ann and and her friend Amro, Shu Wen, a piano teacher, and two passing Mongolian tourists.

With an improved battery pack for the donated Mistral fans, the fans were able to last much longer than the previous meeting, when unfortunately they were cut off after an hour. Thanks to the kindness and generosity of an anonymous donation of $1,300 in total, Pianovers were able to keep cool for the entire duration of the event and really focus on enjoying the music that was played that night.

ThePiano.SG would like to personally thank this kind Pianover, without whom our Meetups would still be held in an often sweaty and humid environment. We would also like to extend this thank you to all the Pianovers who have supported the vision Yong Meng has for the Pianovers Meetups, like Chee Beng, who purchased two T-shirts, and other Pianovers who have donated food, drinks and other amenities.

The improved setup for the Pianovers Meetups also seemed to have attracted several more passersby to stop and take in the sweet sounds that filled the night, as many sat down for the Registered Players Segment.

The segment started with Siew Tin, who brought waves of nostalgia with two Mandarin oldies, “你的眼神” performed by 蔡琴, and “你侬我侬”, as performed by 包娜娜. Siew Tin was followed by Veteren Chris, who impressed us all once again with a rendition of “Love Theme from Cinema Paradiso”. Two Pianovers, May Ling and Gregory were enamoured by the arrangement. They approached Chris afterwards and requested that he share the scores with them.

Next up was Lorraine, who played “As The Deer”, a well-known praise and worship hymn song by Martin J. Nystrom. Duc played the evergreen Baroque piece “Canon in D”, with a touch of individual finesse. “Canon in D” was recently made popular in the mainstream again when it was used in a viral Japanese advertisment drama about a father learning to play the piano for the first time during his daughter's wedding.

Joseph, a professional Busker took to the stage after Duc, lending us not only his talents but his busking equipment as well, playing an awesome “城里的月光”, complete with singing. We are thankful that Joseph loaned us his microphone and speaker; they came in very handy when ours broke down!

Joseph also played “Minuet in G”, and Yong Meng took the opportunity to highlight that the composition of “Minuet in G” have often been wrongly attributed to J.S. Bach. He also shared the fact that the piece was used as a basis for “The Lover's Concerto”.

Last of the registered players was Peter Prem, who dazzled with a blues instrumental, “Night Train”. First recorded by Jimmy Forrest in 1951, “Night Train” has a twelve-bar blues instrumental standard. However, it was discovered that the opening riff – a brief, relaxed phrase repeated repeated over changing melodies - was actually recorded much earlier. The riff first appeared 11 years before, having being recorded by a small group led by Johnny Hodges, when they were supporting Duke Ellington as he performed "That's the Blues, Old Man”.

With the end of The Registered Players Segment came The Open Segment, where Pianovers like Siew Tin, Peter and Duc combine talents in a stylistic jamming session on two separate pianos. And younger Pianovers like Chee Beng's son, Jun En, who seemed to have shed the shyness that was present at earlier meetings take to the piano. The Open Segment is also the portion of the night where veterans like Peter and Joseph get acquainted with the newer Pianovers like Ann. Shu Wen added that she was ecstatic about bringing her piano students to future Meetups and other events alike, such as the Piano Jamming Party.

It's no good pretending that any relationship has a future if your record collections disagree violently or if your favorite films wouldn't even speak to each other if they met at a party.