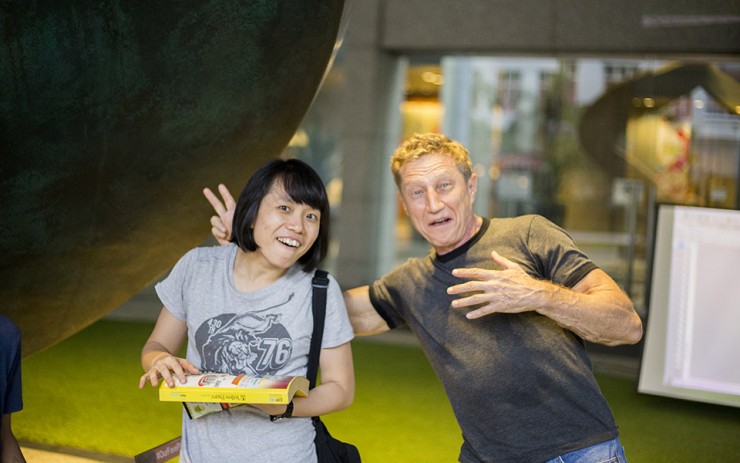 Since Pianovers Meetup started in July 2016, it has been bringing together members of the public who are passionate aboout the piano. This weekly event was started by Sng Yong Meng, the Founder of ThePiano.SG, which aims to build a community of piano lovers in Singapore. Every week, the passionate piano lovers – affectionately known as Pianovers – gather at The URA Centre to bond, to perform, and to exchange tips about music.

Pianovers Meetup gives ordinary piano lovers a platform on which to perform, something which they may not otherwise have access to. Anybody interested in the piano is welcomed, including those who cannot play but love to listen to piano music!

The weekly Sunday programme begins at 5pm, and Pianovers bond with fellow members of the piano community over dinner at Maxwell Food Centre. This evening, a group of four Pianovers, namely, Pat, Zafri, Joe and Will, arrived early to have dinner with Yong Meng. Joe and Will were attending for the first time, and Joe would eventually play this evening as well. We warmly welcome newcomers into our community and we are happy that some actually perform even on their first visit!

After a filling dinner, the group returned to Piano Park @ The URA Centre, where they were joined by Jia Hui and her students. Jia Hui is one of ThePiano.SG’s registered teachers and has been very supportive of Pianovers Meetups. This evening, she brought a group of students, namely Tejas (first time at Pianovers Meetup!) and his family; Lucas, Lauren and their parents; and finally Linnette Chua. All the students would play later that evening.

The main motivation for Jia Hui to bring her students along for the Meetup was so that they could gain public exposure and develop self-confidence outside the classroom setting. It is only by going out there and learning from peers that one can truly benefit in one’s musical journey. Indeed, giving pianists an environment away from the classroom is one of the benefits that Pianovers Meetup offers to pianists. We highly encourage other pianists and piano teachers to join us!

Usually, Pianovers engage in sharing and bonding after Yong Meng gives an introduction of himself and the Meetup, while waiting for the lights to come on.

Today, Jia Hui and Kris took the opportunity to engage in some fun. Pat and Zafri shared with each other the minor points of piano playing. Albert and Siew Tin discussed piano music, as did Joe and Will, both newcomers this evening. We are really heartened to see so much open sharing and bonding going on!

As the lights came on at 7:00pm, the Mini-Recital started. This was the main segment of every week’s Meetup and is a session during which Pianovers went up to a piano to perform. Interested Pianovers simply register online before the Meetup.

Tejas performed two pieces, The Happy Farmer by Schumann, and Shape of You by Ed Sheeran. The latter's popularity is obvious when tickets for his 11 November 2017 show, priced between S$148 to S$248, were sold out in merely just 40 minutes on 11 May. Even more striking was the fact that the tickets were sold in the secondary market for up to S$850!

Next, Siew Tin played 海韵 by 古月 released on 1974 which is based on an original work in 1927. Her second piece was 沧海一声笑 by 许冠杰 , used as the theme song in the 1992 movie "笑傲江湖之东方不败" directed by 徐克 (Tsui Hark).

Lucas delivered three short pieces Allegretto: first movement from Sonatina No. 3 in F by Thomas Attwood, Gospel Flair: No. 43 from Mini Jazz, Vol. 1 by Manfred Schmitz, and Banana Boat Song by Jamaican Folk Song. The last piece was a duet with his piano teacher, Chng Jia Hui. It must have been a great encouragement to have one’s teacher come to one’s performance. On the part of the teacher, attending events with one’s students is a good way to demonstrate that one is current. Bringing one’s students along to external events also allows the teacher to bring students outside the classroom and gain exposure in a real-world environment, as well as to involve one’s students in the bigger music community.

His sister, Lauren, continued with German Dance in B flat: No. 6 from 12 German Dances, WoO 13 by Beethoven, Tom Bowling by Charles Dibdin, and Attitude! by Nicholas Scott-Burt.

Albert entertained us today with "Born Free" by John Barry, used in the 1966 movie by the same title. The film tells the story of a real-life couple who raised Elsa the Lioness, an orphaned lion cub, to adulthood, and released her into the wilderness of Kenya. This theme song went on to win an Academy Award for Best Original Song.

Albert's second piece "Speak Softly, Love" by Nino Rota was written for the 1973 American crime film "The Godfather". The Godfather has the reputation of being one of the world’s greatest films and being influential. In 1990, the U.S. National Film Registry of the Library of Congress earmarked this movie for preservation. In the Registry’s words, The Godfather was deemed "culturally, historically, or aesthetically significant".

The last student of Jia Hui to play today, Linnette, showcased Sonatina in D minor, HWV 581 by George Frideric Handel, and Carousel by Sylvie Bodorová, in preparation for her coming piano exams. We thank Jia Hui for bringing her students to Pianovers Meetup this evening, and we wish all of them all the very best in their upcoming examinations!

Mentari performed Die Trauige Puppe by L. P. Ruygrok. Her mother, Desiree, brought her here. We often see parents bringing their children along for Pianovers Meetups and we are very heartened by this. It is definitely encouraging to see parents and children pursuing their passion for the piano together. This helps in family bonding in no small ways. Furthermore, it is always a proud moment for parents to see their children going up to the piano to perform!

A very regular Pianover now, Teik Lee played Apologise, the debut single written by OneRepublic frontman Ryan Tedder for OneRepublic's debut album Dreaming Out Loud. It was released as the lead single of that album.

New to the Meetup, Joe excitedly shared with us Somebody I Used To Know by Wouter "Wally" De Backer, better known as Gotye. The song's music video was first released on 5 July 2011. It is an unusual video and shows a naked pair, Gotye and Kimbra, before a white backdrop. As they sing, paint falls onto their bodies and the backdrop. This very artistic video, done through stop motion animation, has achieved in excess of 935 million views on YouTube as of 3 August 2017.

Wayne next performed Sonatine, M.40 2nd Movt "Mouvement de menuet" by Maurice Ravel, part of the Sonatina, where the first movement was written for a competition sponsored by the Weekly Critical Review magazine after being encouraged by a close friend who was a contributor to that publication.

Kris returned with A Maiden's Wish, Op. 74, No. 1 by Chopin. For 13 years starting from 1847, Chopin’s friend Franz Liszt transcribed six of the Op. 74 songs for the piano. He did this under the title Six Chants polonais, S.480. This set proved popular and has been a favourite in the concert and recording circles. A Maiden’s Wish is the first piano transcription in the set.

Ending the Mini-Recital was Chris's rendition of Count On Me, Singapore by Hugh Harrison. This piece was apt, given that National Day is approaching. What a good choice of music to end the Mini-Recital segment!

The Open Segment followed the Mini-Recital. Here, Pianovers are free to mingle and interact. Here, open sharing is the norm and we sometimes see people standing around performers and humming along with the music.

Tonight, it was interesting to see Desiree being introduced to Chinese classic 上海滩 by Albert, who is known for his Chinese classics. With the aid of Albert’s scores, Desiree did sight reading on the spot. Chris accompanied her during her performance.

Kri (Australian), was spotted chatting with Desiree (Indonesian) and her daughter, as well as Albert, an elderly Pianover. Zafri (Malay), and Pat (Chinese), were seen jamming together. In another interesting observation, May Ling (Chinese) was chatting with Ploy (Thai) and Wayne (Hong Kong).

These random interactions illustrated one important point. Pianovers Meetup is not just about bringing people together in the piano community, but also about strengthening the Singapore spirit. The event builds social cohesion and promotes racial harmony. Through Pianovers Meetup, people of all races, languages and religions come together to indulge in this commual space to make music.

This evening’s Pianovers Meetup ended after 9:00pm and we certainly look forward to meeting everybody again the following Sunday. The next Meetup will take on a National Day theme, as Singapore’s 52nd Birthday will arrive only days after the Meetup. Pianovers are welcome to play NDP songs and come in red and white that evening!

To celebrate the First Anniversary of Pianovers Meetups, we will be holding our very first Pianovers Recital. To be held on 20 August 2017 at 7:00pm, this will be ThePiano.SG’s very first formal recital. With performers performing in a true recital environment (incidentally, Jia Hui’s student Tejas will be performing!) and guest tickets going for just SGD12, this is an event not to be missed! Register today!