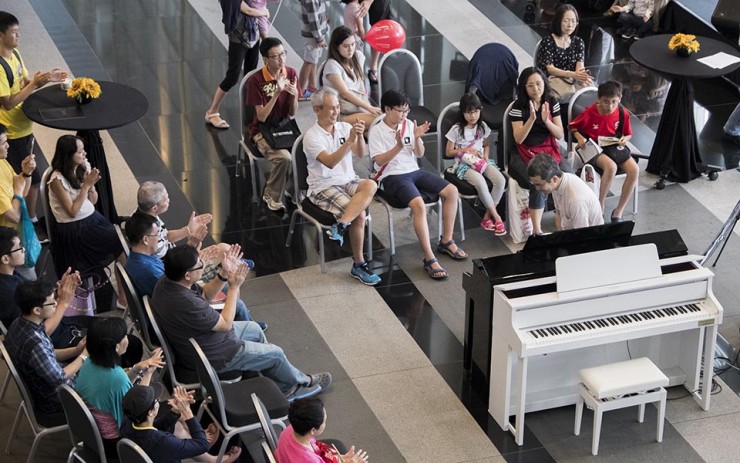 What an exciting 19th Pianovers Meetup we had this week indeed! With an extra special location and two exclusive pianos to dabble with, Pianovers were more than delighted to be a part of the incredible evening. In conjunction with Casio’s two-day Piano Jamming Party that took place on 10 and 11 December, we had the honour of hosting our Meetup at Suntec Singapore International Convention and Exhibition Centre, Level 3.

This special Pianovers Meetup allowed our Pianovers the opportunity to jam and play on a lovely pair of white (Casio CELVIANO Grand Hybrid GP-300WE) and black (Casio CELVIANO Grand Hybrid GP-500) electric pianos. Even with the temporary shift of venue, many Pianovers, like Chris, May Ling, Audrey, Siew Tin, Anthony, Chee Beng and family (who turned up in our Polo Shirts), and Isao still managed to show up. Even Cynthia and Yu Tong (mother and daughter), whom we had met at the Pianovers Sailaway, attended the Meetup.

Yong Meng swiftly began the meeting with a brief introduction of the Pianovers Meetup and its goals of breeding a closer bond within the piano community, as well as an overview of the events that took place at Pianovers Sailaway on a big projector screen. This was followed by the popular Registered Players segment, where Pianovers who had registered beforehand played their hearts out in front of an audience. Because of the sheer size of the Convention and Exhibition Centre, and the fact that the pianos were connected to speakers, all the wonderful tunes that escaped our pianos that evening travelled through the entire space, resonating within the halls and even echoing through the upper floors of the Convention centre.

Annabelle, who is new to the segment, played the famous Waltz piece Grand Valse Brillante by Chopin. This was followed by Siew Tin, who is known for taking us back in time with her Mandarin oldies, played 在水一方.

Isao came to the segment prepared with a “secret weapon”, and delighted us all when he inserted a USB drive into the electric piano that played backing instrumental tracks for his pieces Winter Games by David Foster (the theme song for the XV Olympic Winter Games, held in Calgary, Alberta in 1988, as well as one of the pieces played in the nightly shows at the famous Fountains of Bellagio at the luxurious Bellagio Resort in Las Vegas), and well-known Christmas song “Silent Night”.

Newcomer Wen Jun played Unravel, by Tōru "TK" Kitajima, from the Japanese Anime - Tokyo Ghoul, giving us a refreshing new genre piece to enjoy. Veteran Pianover Chris played Air in G, leveraging a digital piano's capability to play other instruments to bring us a rendition coupled with string accompaniments. Another new comer Yayoi Murai played the second Japanese piece of the night, S.G, by “ADAM at", a Japanese Band. Chee Beng dazzled with a classic, made popular by Richard Clayderman, originally by Oliver Toussaint – Nostalgy. Darren ended the segment with “Triple Baka”, a song by a Vocaloid producer named Lamaze-P (ラマーズP), featuring the Vocaloids Hatsune Miku, Kasane Teto, and Akita Neru. A vocaloid is a singing voice synthesizer.

Throughout the night, Casio staff were seen walking around the meetup and capturing moments on their handy Casio Exilim cameras, even during the open segment, where regular and new Pianovers interacted with each other, sharing tips and experiences through music and laughter.

Many Pianovers were also seen having a go on the electric pianos for the very first time, curious to see the other capabilities they had compared to acoustic pianos. All these heartwarming captured moments were then printed out on 4R photographs and given to Pianovers as keepsakes of the amazing Piano Jamming Party, as well as to remember yet another delightful experience at the Pianovers Meetup.

Country music is the people's music. It just speaks about real life and about truth and it tells things how they really are.