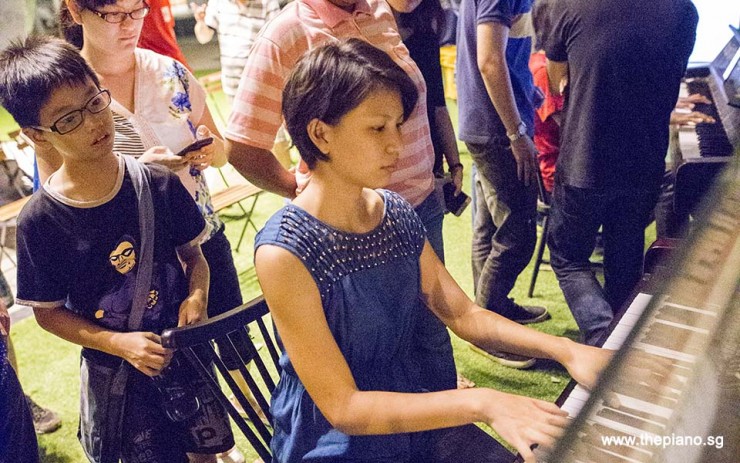 It’s the second week of 2017 and with it we had our 24th Pianovers Meetup! Starting the night were some excited Pianovers, who were gathered early in anticipation of dinner and the event.

Newcomers György, Loga and Lynette were amongst the many who showed up early, along with several familiar faces Marcus and Lyon. Together with Yong Meng, they headed over to Maxwell Food Centre for a pre-Meetup catch up and introductions.

Following dinner, they headed back to The URA Centre where a short presentation was introduced to the 20+ Pianovers gathered what the vision for the Pianovers Meetup is: bringing people in the piano community together.

After which, The Registered Players Segment commenced. Loga kicked the night off with Recueil de Chants by Charles Valentin Alkan. Roughly translated into “song book”, “Recuil de Chants” is one of the many chants Alkan wrote. Five of his other chants include: Op 38 (two books), 65, 67 and 70. Composed between 1857 and the early 1870s, Alkan’s songs were said to be inspired by Mendelssohn’s “Songs without Words”. The composer shared not only a similar length of song and harmonic language as Mendelssohn, but also the keys of which Mendelssohn’s first book, Op 19 was written – E major, A minor, A major, A major, F sharp minor, G minor and ending with a barcarolle.

Most popular for the last of his set, “Barcarolle”, Alkan’s piece was described by Ronald Smith as “A fascinating pre-echo of the “Twenties”. With its flattened sevenths and false relations it might well be described as the piece of Mendelssohn that Gershwin forgot to write!” Mendelssohn’s pieces were composed between 1830 and 1845 and spread through eight collections.

Loga’s enchanting piece was followed by Harith who played Miagete goran yoru no hoshi wo (見上げてごらん夜の星を or "Look up at the stars in the night"). Composed by Japanese Record Award winner Taku Izumi and performed by Japanese singer Kyu Sakamoto, the song was a hit in 1963. The original composition was meant for a musical of the same title in 1960.

Corrine mesmerised with one of the songs from the soundtrack of Ōkami, The Sun Rises by Rei Kondoh. The classical Japanese inspired Ōkami won the best score award at the 2007 BAFTA Video Games Awards.

Corrine also played the Super Mario Bros. theme by Koji Kondo, who said it was the game's most difficult track to compose. It was one of the six themes composed by Koji for the game and can be heard in the first stage of the 1985 edition Nintendo Entertainment System video game Super Mario Bros. Kondo was regarded among industry peers as one of Japan’s best video game composers.

Albert played "再见, 我的爱人" by 平尾昌晃 from Teresa Teng's self-titled 1975 album. She often closed her concerts with the song, and would cry through the duration of it. Albert also played "轻烟" by 刘家昌, a composer whose songs he has played several times before.

Bosca and Bosco, nine and eight years olds respectively, displayed immense talent well beyond their years when they performed River Flows in You, by Yiruma and You Raise Me Up as composed by Secret Garden’s Rolf Løvland, made popular later by Josh Groban in 2003 and Westlife in 2005. Incidentally, Yiruma will be playing live in an upcoming concert on the 25th Febuary at The Star Theatre. Together, the two young talents played a joint number as well: 恭喜大家过新年, the first themed song in anticipation of the coming Chinese New Year.

Wang Yi Fan played the opening theme song of the Disney Junior animated series Miles from Tomorrowland, Way Out by Beau Black, and 茉莉花, a traditional Chinese folk song from the time of Emperor Qianlong of the Qing Dynasty.

Matthew, a student of Shu Wen, played the second Chinese New Year song of the night, "贺新年". When we first met Matthew at Meetup #21, we had mistaken his kids for Shu Wen’s students instead. He had wanted to inspire his children to pick up the piano and took to the stage with “Silent Night”. It proved to be successful as his kids have since picked up the piano and were here this week, performing alongside their father; a true inspiration indeed.

Shu Wen played 社员都是向阳花, by 王玉西. This was a song that originated in the 1960s and reflected the optimism among members of the farming community as they successfully overcame numerous natural calamities. The turn of the century saw a resurgence in the interest in this song, with many versions recorded and distributed. Of particular interest is the piano version by Li Yundi.

Mikael Chew played the Pirates of the Caribbean Theme, by Klaus Badelt. Though Klaus received most of the acclaim from the soundtrack of the film, it was Hans Zimmer himself who wrote most of songs.

The children of inspirational father Matthew were next to take the stage. Isaac played 恭喜恭喜 by 陈歌辛(Chen Gexin). Though it is known as a jolly Chinese New Year jingle, the song has a dark history. Asher and Shawna played classics, Old MacDonald Had a Farm and If You're Happy and You Know It.

Marcus entertained with Madoka Magica Piano Suite by Yuki Kajiura as arranged by Animenz, for the Japanese anime tv series “Madoka Magica". The series features the protaganists, middle school students, as they take on the roles of magical girls and subsequently battle surreal enemies. Marcus will also be playing anime piano pieces at the AniMangaPop 2017 in UK under his stage name "Harry Kinomoto”.

Hyon played Shima Uta by the lead singer Kazufumi Miyazawa of Japanese band "The Boom". He explained that Miyazawa had been inspired by the survivors following the US invasion stories of Okinawa seven decades ago and wrote this song.

Alicia then treated us to a classical Chopin piece, Nocturne No. 20 in C sharp minor, Op. Posth. This piece was dedicated to his older sister Ludwika Chopin. Though it was composed in 1830, it was not until 26 years after his death when it was finally published in 1870.

The Open Segment was greeted with enthusiasm as many Pianovers took centre stage and played a couple of tunes for the group. Newcomers György and Lynette took turns on the piano, even drawing a hefty crowd around them. Alicia and Junhao played “四手聯彈”, a piece they performed once before at Meetup #16. The atmosphere was alive with chatter, with Pianovers like Harith catching up with Chris and Junhao after taking some time off for his exams. To add, Wen Jun, who is also an anime fan, quickly hit it off with Marcus after approaching him about his performance of “Madoka Magica”.

We want to thank everyone who showed up, and Shu Wen, who kindly brought along London Rolls to share with the entire Pianover group. Join us!

None but ourselves can free our minds.