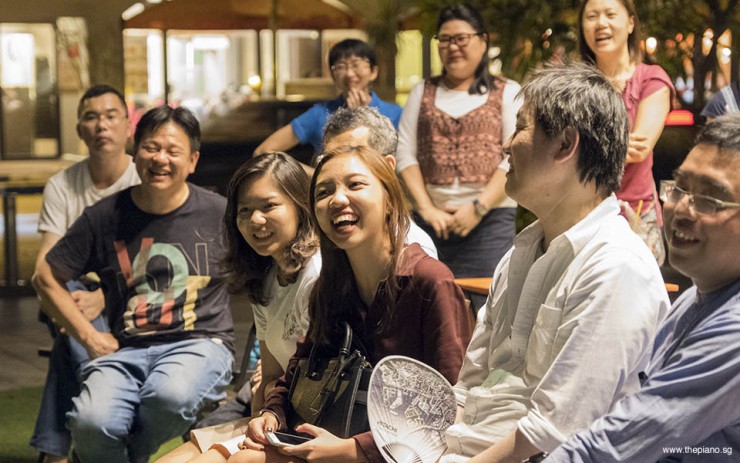 Greeted with fine island weather, this week’s Pianovers Meetup started promptly with the usual Pianover dinner at Maxwell Food Centre. The dinner saw the attendance of newcomers like Desiree’s daughter Manteri and Kheng Poh, as well as regulars like Jin Li, Chan, Rachel and Vanessa and even had two passersby, Justin and Kelvin joining in for the night.

After returning to The URA Centre, the group was greeted by more newcomers like Trina (brought by Siew Tin, her piano teacher), Xuan Lin and her parents (Mark and Joanne). Several regular Pianovers Gee Yong, Albert, Siew Tin, MJ, Loga, Isao, Cynthia and her daughter Yu Tong, May and her son Barrick and Jimmy also showed up.

Even Jerome, who had met an accident a couple of weeks back, showed up in crutches. He is still due to be in a wheelchair for a couple more months, yet showed up to support Pianovers Meetup's vision for an inclusive piano community. Jerome is an avid contributor to the Pianovers Meetup. On top of having been at many of our meetings as well as the Pianovers Sailaway, he has donated a small clip on fan, provided drinks and even bought a ThePiano.SG polo shirt during the meetup. His charisma and generosity was clear to see that evening when he bought five polo shirts as prizes for a guessing game he incorporated into his performance.

After a quick round of introductions from Yong Meng, the group proceeded to begin The Registered Players Segment. Starting it off was newcomer Xuan Lin, who played “Gaiamante” by Reinhold Glière, coincidentally also a piece from the ABRSM syllabus. Because she will be sitting for her ABRSM exam soon, her parents brought her to the Meetup in the hopes that she would be inspired and motivated to build her love for piano. We wish Xuan Lin all the best for her exam! As a gesture of support and thanks, Xuan Lin’s father bought a Polo Shirt.

Albert entertained the crowd with 2 numbers, "天涯歌女 (The Wandering Songstress)" by He Luting (贺绿汀), based on an older Suzhou ballad, and "Hati Memuji (The Heart Praises)", an Indonesian Folk song also known as 晚霞 performed by 蔡琴.

The original piece 天涯歌女 first made an appearance in the 1937 movie Street Angel (“马路天使”) when actress Zhou Xuan (周璇) sang it. Much of what was said in the cinematic sphere, as analysed by the Victor Fan, not only painted Zhou Xuan as the archetypal female songstress, but also stressed on the significance of the movie playing a pivotal role in cinema in terms of integrating songs into film narratives, not unlike how songs are incorporated into Western musicals like “The Sound of Music”.

天涯歌女 has made a name for itself, having being known as one of the most notable Chinese songs of its time. It achieved the same status as comparable songs in the Western world, like “As Time Goes By” from the 1942 movie Casablanca. Since then, the song has been performed by various different actors and musicians such as Teresa Teng, and Tang Wei in the movie Lust, Caution" (色戒) by Ang Lee. In Ang Lee’s movie, the song anchored the heavy emotions involved with the Japanese occupation.

Siew Tin played 友谊地久天长 and 美酒加咖啡 (“mixing wine and coffee”) by 古月. It was advised that one should not mix wine and coffee together, or "酒加咖啡危害健康" (wine and coffee will endanger one’s health) would result! Caffeine and ethanol make a very potent mix that might have catastrophic effects.

“友谊地久天长”, also known as Auld Lang Syne was a traditional Scots song. It is sung traditionally when the clock strikes twelve on New Year’s Eve as a way of bidding farewell to the old year. Interestingly enough, it was also sung at funerals, graduations and as a farewell or ending. The international Scouting movement across the globe uses the song to close jamborees and other functions. The song is also listed in Roud #6294 as part of the Roud Folk Song Index, a global database by Steve Roud, drawing from nearly 200,000 references to almost 25,000 english songs.

Next was Isao, who played Cavatina by Stanley Myers and written for the film “The Walking Stick” in 1970. It was recorded by guitarist John Williams and later popularised as the theme from "The Deer Hunter" about eight years later. The song was notorious among street guitarists because of its non-linear melodies, transitioning from one barre chord to another.

Jin Li played "Nocturne Op. 54 No. 4" by Edvard Grieg from Book V of Grieg's Lyric Pieces. Paul Seow, another Pianover, had played “March of the Dwarfs” from the same compilation during the Pianovers Meetup #22.

MJ did a rendition of popular love song "Can't Help Falling In Love" by Hugo Peretti, Luigi Creatore, George David Weiss, originally by the King Elvis Presley during his film “Blue Hawaii”. The catchy melody was inspired by "Plaisir d'amour" (1784), a popular romance by Jean-Paul-Égide Martini (1741–1816). Jon Schmidt, from The Piano Guys, talks about falling in love with the song “when he heard the reggae cover by UB40, one of his favourite bands. His arranging style often reflects the influence of the classical music and training with which he was raised. These two elements collide in this arrangement” on his website.

Jerome played a string of one song plus a medley of three songs, and asked his audience to guess the title and artist of each song. Audience members who guessed correctly would then receive ThePiano.SG polo shirts, courtesy of Jerome himself. Pianovers that night had their ears perked, trying to guess the songs “她的背影” by 王杰, 让夜轻轻落下 by 梁文福, I’ve Never Been To Me by Ron Miller, Kenneth Hirsch, sung by Charlene Marilynn D’Angelo, and 记得 by 林俊杰. Jerome and the audience were visibly having a good time with the game.

Ending The Registered Players Segment was Gee Yong, who played 温柔的慈悲. This piece was composed by 陈小霞 and sung by 阿桑 in 2003.

The Open Segment kicked off with some photos with the piano collective, followed by the open jamming session. From the many photos taken that night, several small groups of Pianovers were engaged in friendly chats and bonding. MJ attracted a lot of attention from her performance during The Registered Players Segment, particularly because of her cover of “Can't Help Falling in Love”. All the piano enthusiasts were curious to know where she had found the scores for the song, or even how she got to know of it.

The night brought about a sense of community for many of the Pianovers that night, prompting a couple of them to stay till 6am the next morning. For the rest of us, it was a night of good music, laughter, friends and lovely company. Trina and Siew Tin were even so gracious as to help Yong Meng with the packing and moving of equipment from The URA Centre to his car.

Life is one grand, sweet song, so start the music.