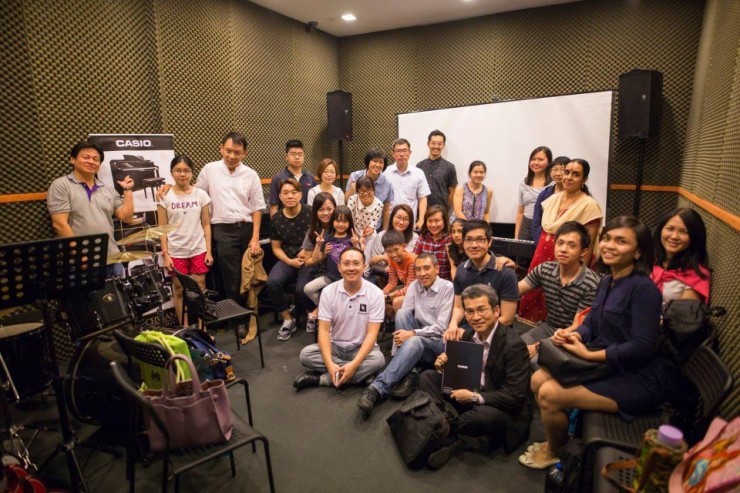 At last Friday's meeting, the group was taken to a new location away from the bustling city traffic and the sweltering island heat, at the air-conditioned 10 Square @ Orchard Central. Tucked away in a cosy room, the 15th Pianovers Meetup still managed to draw an immense crowd. With two beautiful digital pianos, a drum set and a myriad of new and familiar faces, the meeting was abuzz!

Part of this group of new Pianovers were families, including Gary and Winnie, Jean and Yong along with their 16 year old son Yun Jing, and Jason and his daughter Rene. Many of the newcomers also brought along their friends, like Cassandra and her friend Vanessa, Aiwei and Jin Li, Andrew and Xin Quan.

Unlike the usual programme at The URA Centre, this meeting did not include a pre-meeting dinner, meaning everyone had to have their stomachs filled prior to the event. The Pianovers Meetup began promptly as everyone gathered around the Casio CELVIANO Grand Hybrid GP-500. Some sat while others stood, filling up the room to best of their ability.

Things weren’t completely different though, as the projector that everyone has grown accustomed to, brought along by Yong Meng every week, made a honorary appearance. It illuminated the screen with the visionary theme, “Bringing People in the Piano Community Together”. Later in the night, the projector would also serve to bring Pianovers recent updates from ThePiano.SG as well as updates regarding the upcoming Pianovers Sailaway event.

The Registered Players segment began with Summer by Joe Hisaishi, performed by Yun Jing, who came down to the meeting right after his O-Level Physics Paper. He still has two more weeks before finishing his O-Level examinations and we wish him all the best!

Janelene, who is a long-time Jay Chou fan, entertained us with a cover of one of his songs, The Longest Movie. She also shared with the group what a fan she was of Nathan Hartono, who was on Jay Chou’s team and came in runner-up on the widely televised singing competition Sing! China.

Second-time Pianover Isao was sharply dressed, being that he arrived from a meeting. He dazzled us nonetheless, playing the ever-so-popular Over The Rainbow.

After Nayana played Für Elise, Yong Meng enlightened us with a small snippet of trivia about The Mysteries Behind Beethoven’s Für Elise, that Beethoven probably never wanted this version to exist, and would have preferred the 1822 version instead. He also shared that the Happy Birthday song has a background of never-ending copyright lawsuits.

Next up was Issac, who was at the meeting for a second time, brought by his dad, Samuel. He played Payphone, which was performed by American pop rock band Maroon 5.

Maxim came without his scores, but still managed to impress us all with the piece “Prelude in G minor Op. 23 No. 5” by Rachmaninoff, playing purely from memory.

Cecilia and her daughter, Trinity played duets, Dinner with Wolfgang, and Leap with the Piñata, inking their first performances in Pianovers Meetup.

The Registered Players segment was concluded with a group photo, after which the group dispersed for the Open Playing segment. We were treated to very different styles, including an improvised version of two classics, Canon in D and 月亮代表我的心, that included drums!

The Pianovers are truly a talented bunch! Even the kids Trinity and Nayana took turns on the drumset under the guidance of Pianover and drummer Gee Yong. The entire room was filled with cheer and chatter that night. Veteran Pianover Joseph, though arriving late, was able to quickly join in on all the fun. Others had a good time chatting and mingling. Newcomer Winnie, who came with Junn, is already a ticket holder of the Pianovers Sailaway!

Unfortunately, the night had to come to a close shortly before 9:30pm. While The URA Centre is a public space, the Orchard Central venue did not allow us to continue past the time the venue was booked up to. All in all, it was yet another enjoyable evening with piano lovers. We can’t wait for the next meeting!

Cuba is such a beautiful country, and everywhere you go, there's music and people dancing - especially in Havana.